How Swede it is: King Carl goes back to Tacloban | Global News

How Swede it is: King Carl goes back to Tacloban 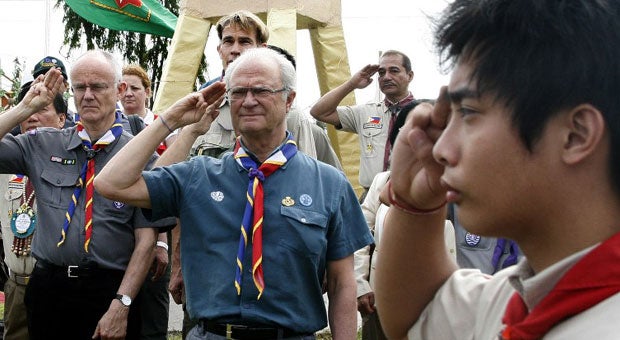 TACLOBAN CITY, Philippines—For the second time in two years, King Carl XVI Gustaf of Sweden will visit this city as part of his country’s commitment to the survivors of Supertyphoon “Yolanda” (international name: Haiyan).

King Gustaf was expected to arrive on Saturday for a seven-hour private visit as honorary chair of the World Scouting Foundation, said Chito Morante, director of the Philippine Boys Scouts (BSP) Leyte council.

The Swedish king, who first visited Tacloban on Jan. 26 last year, will unveil a marker at the new Boys Scout building of the Leyte council, a two-story P- million structure he was funding. The repair work was expected to be finished by February 2016.

The old Boys Scout building located along M.H. del Pilar Street was destroyed during the onslaught of Yolanda on Nov. 8, 2013.

The king will hold a 30-minute press briefing with the local media upon arrival at Daniel Z. Romualdez Airport at 9 a.m., according to Alice Nicart, regional director of the Philippine Information Agency.

He will also make a short visit to the shipwreck located in Anibong district that had been converted into a memorial park, Nicart added.