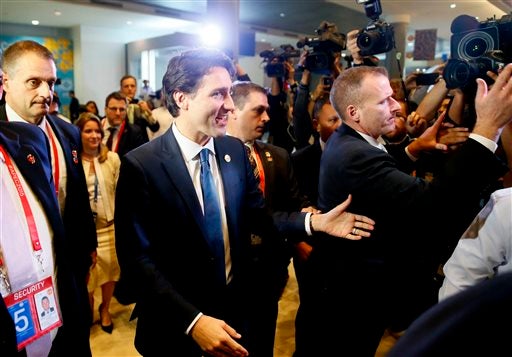 Canadian Prime Minister Justin Trudeau is mobbed by the media following a news conference with Canadian and Philippine media at the Asia-Pacific Economic Cooperation Summit of Leaders Thursday, Nov. 19, 2015 in Manila, Philippines. AP

Too bad the Apec hottie isn’t keen on taking his country’s trash back.

Environmentalists were dismayed that the issue of smuggled garbage was swept under the rug during Wednesday’s bilateral talks between Canadian Prime Minister Justin Trudeau and President Aquino.

Trudeau’s presence in the country for the Asia-Pacific Economic Cooperation (Apec) summit has been marked with sighs and squeals of admiration for his handsome features.

But he is also hounded with the stink of some 100 shipping containers misdeclared by an Ontario-based firm as plastic scraps but later found out to be household wastes.

EcoWaste Coalition on Thursday said Trudeau could have been remembered not just for his good looks if only he gave the “gift of justice in the long drawn-out dumping scandal.”

“What a total letdown. Ignoring the Canadian garbage scandal will not earn you the respect of your people and other nations,” said environmentalist Von Hernandez.

Labor leader Alan Tanjusay said Trudeau’s failure to take responsibility had put in doubt his sincerity to lead the Canadian people to his campaign promise of an environment-caring shared prosperity.

A total of 103 containers of trash consignments from Canada entered the country in 10 batches and intercepted by customs authorities from June 2013 to January 2014, according to EcoWaste.

Canada is looking at a “Canadian solution” and possibly amending legislation to address the unresolved problem of a garbage shipment from a Canadian company to Manila, Trudeau Thursday said.

The issue presented the opposite pole of Trudeau’s first trip to Manila that was marked by swooning adoration of female Filipino fans.

The Canadian prime minister made no clear commitment to take back its trash when he was asked about the matter in a press conference early Thursday evening.

“I have obviously been made aware of this situation and told that there is a Canadian solution in the process of being developed.  And at the same time, this has exposed a problem that needs fixing within our own legislation,” Trudeau told a briefing at the International Media Center.

Pressed on what such solution might be, Trudeau said part of resolving the matter would be to plug loopholes that allowed the incident to happen in the first place.

“I think going forward, we need to ensure that if a situation like this were to arise once again, the Canadian government will have more power to actually demand action from the companies responsible,” he said.

“If there were loopholes here [that were] allowed to be skirted, we have to close it,” he added.

The Canadian Embassy has maintained that the case was a private commercial matter between Chronic Inc. and its Philippine partner, Chronic Plastics.

After rotting in the ports of Manila and Subic, at least 26 containers were disposed of at a landfill in Tarlac, Mr. Aquino’s home province, between June 26 and July 8 this year. The disposal was stopped after drawing the ire of local officials and residents.

On Trudeau’s arrival in the country on Tuesday, about 1,500 residents in Tarlac province turned to prayer power as they sought the closure of the private landfill that took in 26 trucks of illegally imported Canadian trash.

Members of the Concerned Citizens of Bamban, Circulo Bambanense, Samahang Magdalo and parish pastoral councils attended a Mass and a candle-lighting ceremony.

The landfill of Metro Clark Waste Management Corp. (MCWMC), built by a German company in 2000, sits on public land within the 36,000-hectare Clark Special Economic Zone on the side of Bamban in Sitio Kalangitan, an area being claimed by Aetas as an ancestral domain.

MCWMC president Rufo Colayco said his company stopped receiving Canadian garbage from the Bureau of Customs (BOC) in response to the appeals of residents and local officials.

MCWMC’s decision conformed with the action of Clark Development Corp. to padlock the 18 trucks brought there by the BOC on July 6.

In his homily, Fr. Mario Elias urged the faithful to unite and trust in God, saying that people in Tarlac survived the 1972 floods and 1991 eruption of Mt. Pinatubo through God’s help.

Colayco said the disposal contract came from the BOC that acted on orders of a regional trial court in Manila. The court allowed the cargo mover, Le Soleil, and its foreign partner, to recover 35 containers in April 2015.

At least 15 containers remained in Subic Bay Freeport, part of the illegal cargoes since 2013.

EcoWaste Coalition said the importation violated a number of local laws, such as the DENR Administrative Order No. 28 (Interim Guidelines for the Importation of Recyclable Materials Containing Hazardous Substances) and Republic Act No. 9003, or the Ecological Solid Waste Management Act of 2000.

Tarlac Vice Gov. Enrique Cojuangco Jr. said the prayer event was held shortly after the provincial board affirmed “as valid and active a local [Bamban town] ordinance prohibiting the entry of any garbage-loaded vehicle to pass through the Anupul-Dapdap Road leading to the Kalangitan landfill.”

“We also issued a clarificatory resolution that the access road to the landfill is the primary access road in the resolution allowing operation, which is the road in Capas [town] from Cutcut I to Cutcut II to Kalangitan landfill,” Cojuangco told the Inquirer on Thursday.

Tarlac Gov. Victor Yap, in a separate interview, said the board recognized that the Bamban resolution and its processing  were in order.

“We have to avoid passing there for the moment,” Yap said, adding that MCWMC trucks should pass through Capas instead.

But Capas Mayor Antonio Rodriguez wants MCWMC to construct a concrete road leading to the landfill, which serves 55 local governments in Luzon, 360 companies and 180 housing units based in nearby Clark Freeport, five locators at the Trust International Paper Corp. complex in Mabalacat City, 125 industrial clients and 80 percent of hospitals in Central Luzon. With reports from Ria Consuelo Mendoza and Krizia Jamille Yap, Inquirer Central Luzon