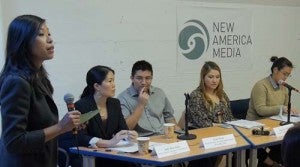 Odette Keeley of New America Media, Sally Kinoshita of Immigrant Legal Resource Center, Juan Ortiz of International Institute of the Bay Area, Dayanna Carlos of The California Endowment and Annette Wong of Chinese for Affirmative Action discuss the federal court decision and what families can do now. PHOTO BY MIN LEE

SAN FRANCISCO–A day after the 5th Circuit ruled against an Obama administration executive action on immigration, immigrant rights leaders said now is the time for affected communities to act.

“We are not going to sit around and wait for a court ruling. We will not let right-wing judges or right-wing states determine what happens to the fate of our communities,” Annette Wong, program manager with Chinese for Affirmative Action (CAA) told reporters at an ethnic media news briefing organized by New America Media.

Immigrant rights leaders said the undocumented should continue applying for DACA, consult trusted nonprofits for other visa options and prepare documents for applications in advance of future court rulings.

“The more applications there are, the harder it is for the courts to reverse the program,” said a roundtable speaker, which was part of an effort by the statewide coalition Ready California to encourage residents to apply for Deferred Action for Childhood Arrivals (DACA).

A year ago, President Obama announced two new programs through executive action – an expansion of the DACA program and a new program for parents of U.S. citizens or legal permanent residents, called Deferred Action for Parents of Americans, or DAPA.

These programs are now on hold following the November 9 court ruling upholding a lawsuit brought by 26 Republican-led states against the Obama administration.

The Obama administration is expected to appeal the ruling to the U.S. Supreme Court in the next few weeks. If the Supreme Court takes the case, it will likely announce a decision in June 2016.

It’s important to understand that Monday’s ruling does not affect DACA, noted Sally Kinoshita, deputy director of Immigrant Legal Resource Center. That program remains in effect and continues to help undocumented immigrants who came to the United States as children get work permits, social security numbers and a temporary reprieve from deportation.

Juan Ortiz, staff attorney with the International Institute of the Bay Area (IIBA), advised families to go to a trusted community based organization for an immigration check-up to see what they might qualify for.

In fact, he said, almost 15 percent of people who apply for DACA end up qualifying for something else, like a U-Visa (granted to victims of crimes) or a T-Visa (granted to trafficking victims).

But while the DACA expansion and Deferred Action for Parents of Americans or DAPA are on hold due to the court decision, immigrant rights advocates said there are steps that families can take now to secure their future.

“It doesn’t matter what status someone has; there are actions they can take,” said Ortiz. U.S. citizens can register to vote; eligible green card holders can apply for citizenship. Undocumented California residents can apply for a driver’s license under AB 60, noted Ortiz.

Next May, undocumented children in California will be able to access full-scope Medi-Cal. California parents can start enrolling their kids now in Restricted Medi-Cal (sometimes called Emergency Medi-Cal), regardless of their immigration status.

Parents of U.S. citizens or legal permanent residents can start preparing their documents so they will be ready when DAPA goes into effect. And, most importantly, people can still apply for the original DACA program that was announced in 2012.

Meanwhile, several DACA recipients speaking at the briefing encouraged their community members to apply for the program so they could access all of its benefits – not only a social security number, a work permit and a reprieve from deportation, but also the stability and security to stand up and advocate for the rights of others in their communities.

For Mexican American DACA recipient Luis Avalos, getting DACA was “ a shining light in a dark tunnel of uncertainty,” allowing him to work legally and stop being afraid of deportation.

Avalos, 22, is now the chair of the San Francisco Youth Commission and advises the mayor and board of supervisors on issues of concern to young people. In order to be appointed to the commission, Avalos needed a social security number.

“I wouldn’t be able to be part of the San Francisco Youth Commission without DACA,” he said.

For Hong Mei Pang, a community organizer with ASPIRE, getting DACA was “a pivotal moment” in her life.

Pang, who came to the United States from Singapore 12 years ago, said before DACA was announced in 2012, she was “working three jobs under the table in abusive, exploitative conditions.” DACA allowed her to get work authorization and step out of the shadows.

Today she advocates against deportations that continue to separate families. “Being able to participate in community organizing,” she said, “means we are able to hold each other up.”

Meanwhile, for Brian Cheong, DACA might have saved his life.

Cheong, who moved here from South Korea 12 years ago, was the leader of his high school’s marching unit, graduated at the top of the class, and was awarded the Outstanding Student Award, given to one graduating senior each year.

When he went to college, he said, “that’s when my life turned a little downward.”

“On top of that,” he said, “the fear of deportation followed me everywhere I went. You never know if when you’re sleeping or working if people are going to come and capture you.”

“I started to question my life,” he said, “and whether it was worth it to continue.”

When DACA was launched in 2012, Cheong said there was never any question that he would apply for it. Getting DACA allowed him to work legally and have a secure source of income for tuition, removed the fear of deportation, helped him regain confidence in life, and allowed him to feel stable and secure for the first time in a long time.

“I’m the type of person that likes to plan ahead, and I couldn’t do that before DACA,” Cheong explained.

Today, Cheong is in a military program called MAVNI, a special program that could allow DACA recipients with certain skills to gain something that they otherwise would not be able to access – a path to citizenship. Cheong plans to eventually petition for his parents and family, who are currently left out of immigration reform.

To other young people who are living without legal status, Cheong had a simple message: “You are not alone.”

“Get up, speak up, advocate and educate,” he said, “not just for DAPA [Deferred Action for Parents of Americans] but for CIR [comprehensive immigration reform] as well.”