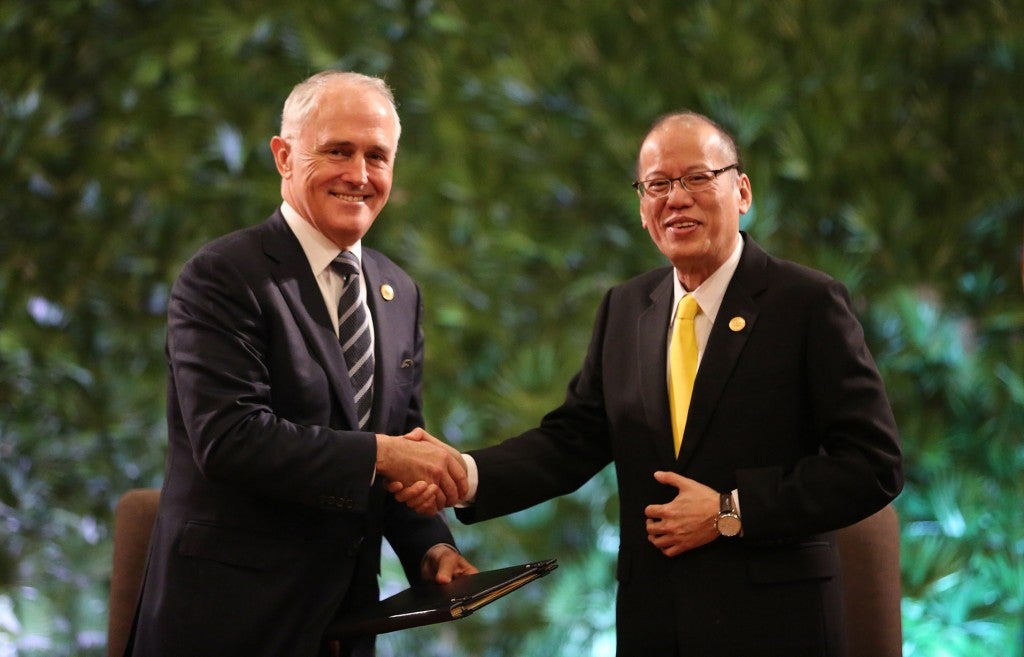 Australian Prime Minister Malcom Turnbull, left, and President Benigno Aquino III shake hands during a bilateral signing of agreement held at the Sofitel in Pasay City, Nov. 18, 2015, ahead of the start of the Asia-Pacific Economic Cooperation summit.
JOAN BONDOC

President Benigno Aquino III on Wednesday signed a comprehensive partnership with Australia in a bid to strengthen the relationship of the two countries.

“Since 1946, the Philippines and Australia have cooperated in all aspects of our relations, including that of humanitarian assistance and disaster response. It is this long legacy of cooperation that we pay tribute to today, in signing the Joint Declaration on Philippines-Australia Comprehensive Partnership,” Aquino said during a joint briefing with Australian Prime Minister Malcolm Turnbull at Sofitel Philippine Plaza in Manila.

“The Declaration acknowledges the increasing breadth and depth of our relations, which sets the tone, pace, and direction of our relationship in the years ahead,” he said.

Aquino said he and Turnbull discussed how the two countries could improve bilateral relations and engagement on regional and international issues.

“We reaffirmed the importance of engagement and cooperation in the political, defense and security, law enforcement, and counter-terrorism fields, among others,” he said. “We also exchanged views on regional security challenges, including maritime security, and, with this, committed to continue our bilateral consultations on how to address them.”

Australia is among the countries that have been helping the Philippines modernize its military. It recently donated two landing craft heavy vessels to the Philippine Navy.

“These are significant assets not only to our defense, but also and more importantly, to our disaster response capabilities. One of these vessels, in fact, was used in our Navy’s relief operations in the wake of Typhoon Koppu (Lando),” Aquino said.

He said another area of cooperation is the Resilience and Preparedness towards Inclusive Development (Rapid) Programme, which will help enhance the country’s disaster risk reduction management (DRRM) capacities.

Aquino also thanked Australia for the growing bilateral trade between the two countries, as well as the latter’s support for public-private partnership (PPP) programs.

After signing the comprehensive partnership statement, Aquino and Turnbull witnessed the signing of a memorandum of understanding on Cooperation in Technical Vocational Education and Training (TVET) between the Technical Education and Skills Development Authority of the Republic of the Philippines and Department of Education and Training of the Government of Australia. The MOU was signed by Foreign Affairs Secretary Albert del Rosario and Ambassador William Thomas Ross Tweddell.

“This will allow us to share knowledge, information, and best practices with each other, particularly in areas of mutual interest, and collaborate on significant projects that will enable both the Australian and the Filipino peoples to take hold of their own destinies,” Aquino said.

Turnbull said the Philippines and Australia are “very, very good friends” and that their relationship is “deepened further” through the signed agreements.

He also lauded the government for pushing for the rule in the region.

At the end of his speech, Turnbull said it is important for both businesses and governments to be “agile.”

“They have to be able to respond quickly and flexibly and seize the opportunities that change presents. That’s why ensuring that we have free markets within our own countries but, of course, free trade across the border is very important,” he said.

Australia is among the 12 countries involved in the Trans-Pacific Partnership. The Philippines has been pushing for its inclusion in the agreement.

“The signing of the TPP recently was so important, and we note that your enthusiasm for acceding to that treaty in the future is something that we would welcome as well,” Turnbull said. CDG