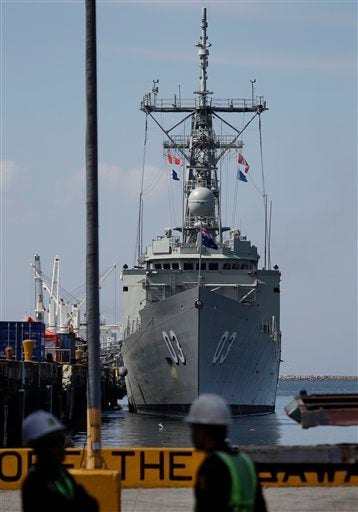 The two landing craft heavy vessels donated by Australia have arrived in the Philippines after almost two weeks of voyage.

Navy chief Vice Admiral Jesus Millan on Wednesday said the two ships were escorted by warship BRP Gregorio del Pilar and have passed the waters of Zamboanga on Tuesday night.

It is expected to be in Sangley Point in Cavite on Friday.

“Of course we are happy they are home,” Millan said.

The two ships will be also be displayed in the Navy Headquarters in Roxas Boulevard on Monday at the turnover of the Navy leadership.

Millan will retire on Monday as he reaches the mandatory retirement age of 56. His successor has not yet been named.

President Benigno Aquino III on Monday is expected to attend the turnover ceremony.

The two brand new AW109 attack helicopters will also be on display on Monday. It has yet to be announced if they will be finally commissioned to the Philippine Navy.

In January, the Australia announced that it will donate two LCH vessels. Both were decommissioned from the Australian Navy last November 20, 2014.

The donation included a package of spare parts.

The two ships sailed for the Philippines starting July 23. They will be named BRP Ivatan and BRP Batak. They used to be named as HMAS Tarakan and Brunei in the Australian Navy.

The ships are expected to enhance the Philippines’ capability to respond to disasters as it would transport heavy equipment and large amounts of aid.

A welcome ceremony awaits for the ships but it will also depend on the weather condition.

“Due to Typhoon Hanna, we are still waiting the assessment and recommendation of my units from the Philippine Fleet subject to weather conditions,” Millan said. TVJ