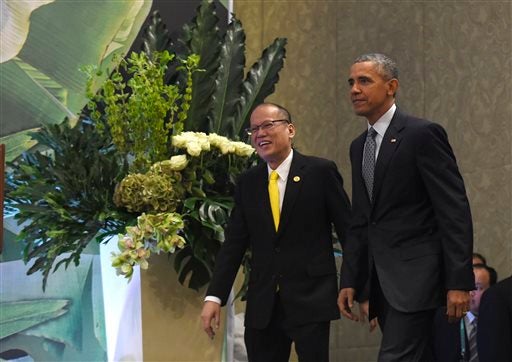 U.S. President Barack Obama and Aquino arrive for a news conference in Manila, Philippines, Wednesday, Nov. 18, 2015, ahead of the start of the Asia-Pacific Economic Cooperation summit. AP

MANILA, Philippines — President Barack Obama says he’s confident the U.S. will be able to execute a defense cooperation agreement with the Philippines despite a hold-up in implementation.

Obama is meeting with Philippine President Benigno Aquino in Manila. He says the agreement will proceed but that it must go through the process.

READ: Obama to give PH 2 warships / Aquino thanks Obama for military support

The two countries signed a pact last year giving American forces temporary access to selected military camps and permission to preposition assets. But it’s been delayed by a challenge before the Philippine Supreme Court.

Aquino says the agreement is welcomed “with very open arms.”

The leaders are discussing how to lower tensions in maritime disputes with China through peaceful means.