Obama to give PH another warship plus research vessel

WITH a towering warship behind him, US President Barack Obama announced Tuesday that the United States would hand over two ships to the Philippine Navy to boost its maritime security capabilities, in a bid to show the United States and its allies won’t be cowed by China in disputed waters far off its coast.

Obama said the ships—one US Coast Guard cutter and one research vessel—were part of a broader American plan to scale up assistance to naval forces in Southeast Asia, where coastal nations feel threatened by China’s aggressive moves to assert control over the South China Sea.

Obama said the United States had an “ironclad commitment” to the Philippines—a US treaty ally—and a mutual commitment to free and safe navigation at sea.

“More capable navies, in partnership with the United States, are critical to the security of this region,” Obama said as he opened a six-day tour of the Philippines and Malaysia.

He said the ships would help the Philippines navigate and patrol its territorial waters.

Obama never mentioned China by name as he stood in front of the BRP Gregorio del Pilar, a onetime US-owned frigate, but the intended recipient of his message was clear.

As regional tensions with China have simmered in recent years, Washington has sought out symbolic ways to counter Beijing’s claims in the region without putting itself in direct confrontation with the powerhouse nation.

Earlier this month, US Defense Secretary Ash Carter boarded a US aircraft carrier plodding through the South China Sea, a week after a US Navy destroyer patrolled close to a reef where China is building an artificial island and has asserted a 22-kilometer territorial boundary. The United States has refused to comply with China’s self-proclaimed air defense zone over the South China Sea.

‘You can count on US’

Obama’s announcement came at the start of his ninth trip to Asia, and this one, like the others, was designed to illustrate his efforts to strengthen alliances as part of his seven-year campaign to increase US influence in Asia.

“You can count on the United States,” the US leader said shortly after his arrival in Manila for the Asia-Pacific Economic Cooperation (Apec) summit this week.

During back-to-back summits in Manila and Kuala Lumpur, Obama planned a particular focus on touting the Trans-Pacific Partnership that the US recently struck with 11 other nations—China not included.

The sweeping free trade agreement is at the heart of Obama’s Asia policy, but its prospects for ratification by US lawmakers remain uncertain.

Flanked by US and Philippine troops, Obama said he would seek to provide another $140 million in maritime security aid to Southeast Asia next year, although it was unclear whether the US Congress would approve those funds.

The Philippine government’s eagerness for more muscular US military assistance here illustrates how concerns about China appear to have superseded the nation’s resentment of its former colonial master and its reluctance to give US troops free rein.

Yet while Obama’s commitments fall short of what some countries in the region have sought, not all of that is Obama’s doing.

On his last trip here, in 2014, Obama signed a defense cooperation pact allowing the United States to base troops temporarily at some military camps, but a legal challenge has delayed implementation.

Although the country’s pallid military has struggled to push back effectively against China, the Philippine Constitution bars permanent US bases.

Six Asian countries assert overlapping claims to parts of the South China Sea, and China is locked in a parallel dispute with Japan and South Korea over the East China Sea. 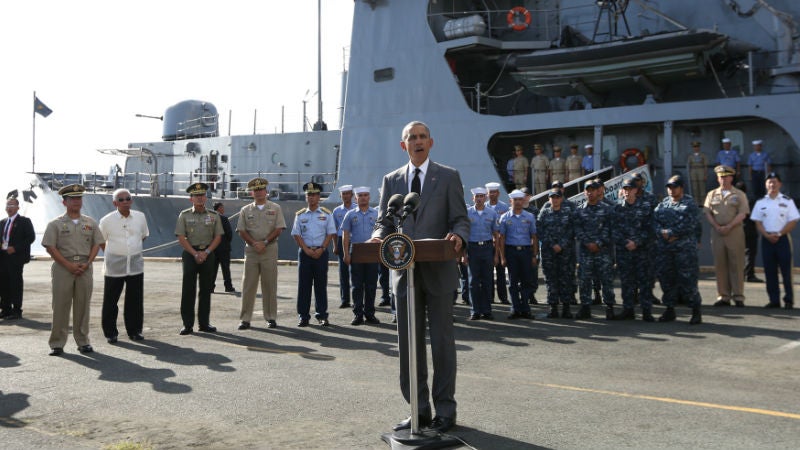 SHIPSHAPE, SHARPLY WORDED MESSAGE With the BRP Gregorio del Pilar as background and flanked by US and PH troops, US President Barack Obama delivers a speech upon his arrival in Manila on Tuesday for the Apec Leaders’ Meeting. INQSnap this page to view more photos NIÑO JESUS ORBETA

China views control of the waters, with their abundant underwater oil deposits and strategic shipping lanes, as key to its rise as a major economic and military power.

“The United States has been committed to the security of this region for more than 70 years. We have a treaty obligation, [an] ironclad commitment to the defense of our ally, the Philippines,” Obama said.

“Our visit here underscores our shared commitment to the security of waters of this region and freedom of navigation,” he added.

Chinese President Xi Jinping also arrived in Manila Tuesday for the Apec summit, but he did not make any public comments.

In Beijing, Chinese Vice Foreign Minister Liu Zhenmin said China was the real victim in the South China Sea dispute as it had “dozens” of its islands and reefs illegally occupied by three of the claimants. He did not name any countries.

“The Chinese government has the right and the ability to recover the islands and reefs illegally occupied by neighboring countries,” Liu said. “But we haven’t done this. We have maintained great restraint with the aim to preserve peace and stability in the South China Sea.” With reports from the wires and Jaymee T. Gamil