THE Philippines and Vietnam, both known for being vocal against Chinese incursion in South China Sea, signed a joint statement on strategic partnership on Tuesday.

President Benigno Aquino III and Vietnamese President Truong Tan Sang at Malacañang witnessed the signing of the Joint Statement on the Establishment of a Strategic Partnership between the Philippines and Vietnam by Foreign Affairs Secretary Albert del Rosario and Vietnamese Deputy Prime Minister Pham Binh Minh.

Also signed was the Exchange of the Signed Protocol to Amend the 2010 Philippines-Vietnam Memorandum of Agreement on the Supply of Vietnamese Rice to the Philippines.

Truong said the bilateral relations of Vietnam and the Philippines have “reached its maturity” as the joint statement was signed.

“This is indeed a historic event, marking a new era for cooperation between our two countries, while making contributions to the maintenance of peace, stability and prosperity in the region,” he said.

“We believe that the establishment of this Strategic Partnership will provide further impetus to deepen our cooperation, particularly in the areas of economic, agricultural, defense, and maritime engagement—areas that are truly vital to the strategic interests of both our nations,” Aquino said.

Both leaders cited the need to promote stability in the Association of Southeast Asian Nations (Asean) region. 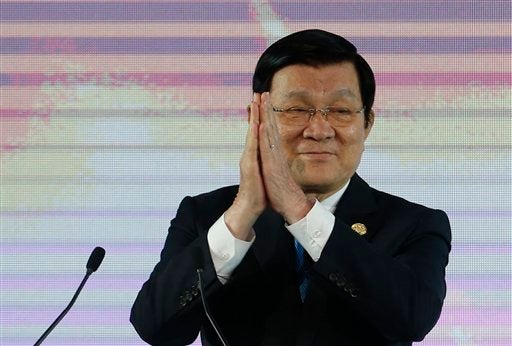 “Mr. President and I shared our concerns over the recent developments in the East Sea or the South China Sea, affecting trust, peace, security and stability in the region. We also reaffirmed the importance of ensuring the stability, maritime security, safety and freedom of navigation and of flight in the South China Sea,” Truong said.

He said both of them agreed to maintain “Asean centrality” when it comes to security issues in the region.

“The Philippines cannot overemphasize the importance of ensuring the full and effective implementation of the Declaration on the Conduct of Parties in the South China Sea, as well as the urgent need for Parties to conclude negotiations on the Code of Conduct,” Aquino said.

While countries like the Philippines and Vietnam have pushed for regional discussions on the territorial disputes in South China Sea, China has insisted on bilateral talks. The Philippine, however, has pointed out that there are overlapping claims in the said area.

Aquino said he and Truong discussed the recent ruling of the United Nations Arbitral Tribunal taking up the case filed by the Philippines to clarify several issues involving maritime features in South China Sea.

“In terms of defense relations, we welcome the active engagement and cooperation between our respective defense and military establishments,” Aquino said of Vietnam.

Other issues discussed in the statement were high-level visits  to celebrate the two countries’ 40th anniversary of diplomatic relations in 2016 and additional protocol on the agreement on rice training.

Aquino said they are hoping to increase bilateral trade and explore to enhance trade and investment activity.