The extent of the popularity of Canada Prime Minister Justin Trudeau will be tested as he sets foot in the Philippines.

Trudeau arrived at the Ninoy Aquino International Airport Terminal 2 at 5:40 p.m. on Tuesday for the Asia-Pacific Economic Cooperation (Apec) summit.

He was welcomed by Agriculture Secretary Proceso Alcala.

Trudeau noticeably took time to shake the hands and look intently at those who welcomed him at the tarmac.

Trudeau, tall and dashing at 43, has won the hearts of social media users over his good looks. 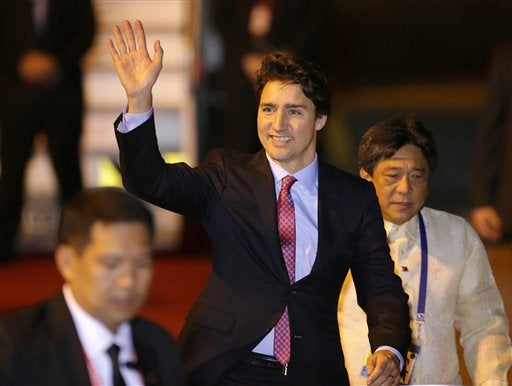 A former school teacher and member of Parliament since 2008, Trudeau is the second youngest prime minister in Canadian history.

Half of Trudeau’s Cabinet members are women. Asked why he made his Cabinet gender equal, Trudeau said: “Because it’s 2015.”

Will Filipinos swoon over him, or will his visit be eclipsed by a “stinky” issue that has been hounding Canada and the Philippines’ relations since 2013?

The arrival of Trudeau is hounded by the issue of container vans filled with garbage which have been dumped here by Canada.

The government has been asking the Canadian government to take back the 50 container vans of trash, but the country has refused.

Developed nations are prohibited from dumping garbage in developing countries under the Basel Convention on the Control of Transboundary Movements of Hazardous Wastes, which the Philippines and Canada have ratified.

According to the international treaty, the country where the waste originated should be responsible for returning the waste to its port of origin “within 30 days” from the time it was notified about the illegal shipment.

The Canadian Embassy said the importation of trash was a “private commercial matter” between a Canadian exporter and its Philippine importer-partner. IDL/RC