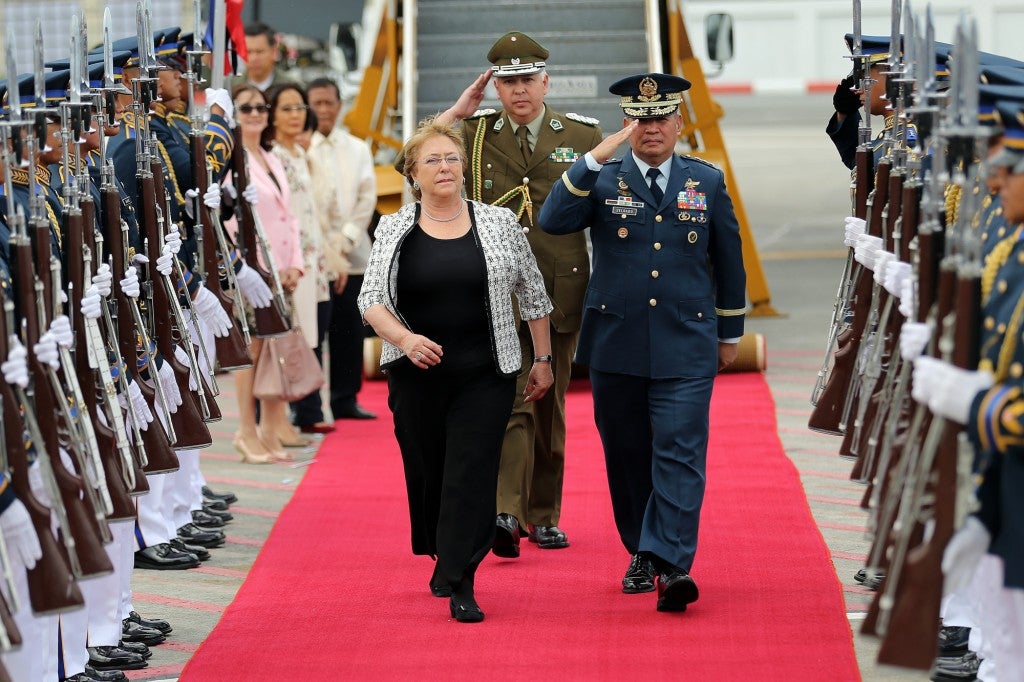 CHILEAN president Michelle Bachelet on Monday shared the lessons of her country’s experience in dictatorship and  their strategies in addressing education needs, health issues, and corruption.

During the CEO Summit for the Apec 2015 at the Makati Shangri-La Hotel, Bachelet said the challenge of her government is to shift the focus on rights, which were lost in the dictatorship, to a shared sense of responsibility to pose solutions to problems.

“For many years, we have a dictatorship. Probably we’re too much on the rights and not much on responsibilities,” Bachelet said as a member of the panel for the CEO summit.

“So now, we’re working a lot not only in ensuring higher quality of education level, but also forming systems, not only a clearer conscience of rights but also of responsibilities, that they should be part of the solution,” she added.

She is also the only Latin American woman to win the presidency who is not the wife of a previous political leader.

Before serving as president, she was minister of health and of defense under her predecessor, President Ricardo Lagos.

Her family was detained when General Augusto Pinochet seized power in 1973. Together with her parents, she was tortured and was later sent to exile in Australia.

“We have learned some lessons. Many of us had years of dictatorship in the past. Many of us understood essentials like consolidation of democracy, that means increasing the capacity of the people,” Bachelet said.

Bachelet said her government is also addressing corruption in government. Her son Sebastian Davalos figured in a corruption scandal for allegedly using political connections so that he could get a $10 million bank loan for his wife’s real estate business. Bachelet has denied knowing about the transaction.

Bachelet said one of the measures instituted by her government to clamp down on corruption is to ban donations by businesses to politicians.

“We are not a corrupt country, but we have some insights that, okay, we have to stop this. We have a very strong agenda on anticorruption and transparency. We are having a lot of bills in terms of improving the quality of politics,” she said.

“I know this is something controversial, but for us it is essential. No money from business for politics. If somebody wants to give money, as a person, but not with business. Those who will not respond to the law will lose seat in Congress,” she added.

Bachelet said her government is focused on education and health precisely to alleviate poverty in the country. She said Latin America is the region with the biggest gap between rich and poor in the world.

“We have approved a fiscal reform accepted by all political parties which gives an increase in three percent of gross domestic product committed to ensure quality education and other social programs. We are also supporting health and so we can improve health conditions. We need to improve services. But we need to improve quality and opportunity,” she said.

“In order to have a real democracy, you need to tackle inequalities… taking care of them, and giving them opportunities. That’s the direction most of our government are doing,” she added.