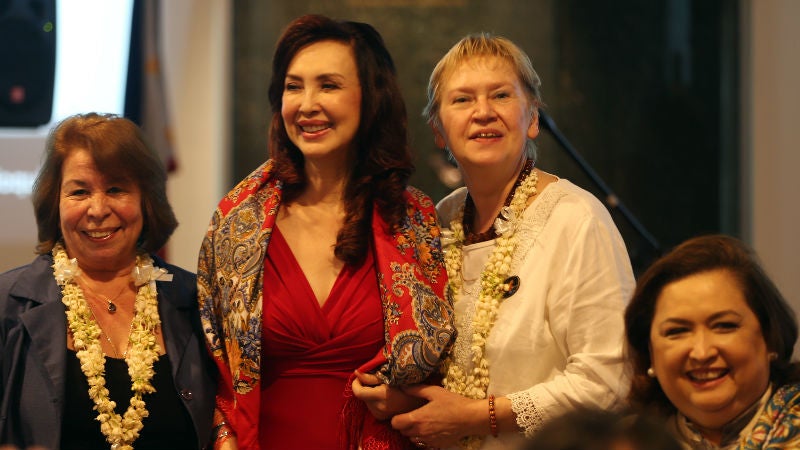 QUIRINO TRIBUTE Natalie Sabelnika of the US Congress of Russian Americans, Cory Quirino, Tatiana Tabolina of the
Institute of Ethnology and Anthropology of the Russian Academy of Sciences, and Ruby Q. Gonzalez at the Quirino tribute in
Ayala Museum EDWIN BACASMAS

TWICE uprooted from their homeland, they came to the Philippines in 1949, building a community in a jungle in the company of strangers that embraced them like family.

It did not take long for White Russian refugees—white, to mean their political persuasion opposing the Communist Red at the time—to assimilate to island life, falling in love with the tropical sunset, picking native flowers, learning how to fish, jumping in the ocean in seemingly endless summers, making art and music, and even twice surviving typhoons.

A group of nine former refugees returned to the Philippines last week, recalling their time on the island of Tubabao in Guiuan, Eastern Samar province, where their families built a settlement after fleeing from communist China.

They were babies or teenagers then in Tubabao, from where they moved on to the United States, Australia and other parts of the world.

The group was welcomed in a “homecoming” by the Elpidio Quirino Foundation as part of the yearlong commemoration of the late President’s 125th birth anniversary.

It was through Quirino’s decree that the Philippines, then still a fledgling independent state rebuilding from the rubble of World War II, welcomed the refugees as the only nation to respond to the call of the International Refugee Organization (IRO), the precursor of what is now the office of the United Nations High Commissioner for Refugees (UNHCR).

“For me, it is like a family. This is like being in a family, immediately,” said Tatiana Tabolina, who now works at the Moscow-based Russian Academy of Sciences.

Natalie Sabelnika was just a toddler when her family arrived in Guiuan, but she still has some memories through photographs that her parents took with them when they left for the United States about two years later.

“These were people who sat on suitcases they did not unpack, because they thought they would return to their homeland … . I think it takes a great person to understand—and I know from history—that your grandfather (Quirino) obviously gave us compassion,” said Sabelnika, president of the US Congress of Russian Americans.

More than 6,000 refugees lived in Tubabao for some three years, from 1949 to 1951, escaping communist China in what became their second wave migration.

The White Russians, peoples of different ethnicities from what is now Eastern Europe who supported the Russian czarist regime, had settled in Chinese cities when they fled what became Soviet Union after the Russian revolution. They soon found out that they had to flee China as well.

Bernard Kerblat, UNHCR’s representative in the Philippines, described Quirino’s tremendous act of accepting the refugees at the time when the country had yet to bounce back from the shambles of war.

“The refugees were forced, for the second time in their lives, to become refugees again just as they were starting to rebuild their lives in China. They called on the world to help them (through the IRO),” Kerblat said.

“At the time, the only country that responded to the call of the IRO was the newly independent sovereign nation of the Philippines and its extraordinary people through the leadership of President Quirino,” he said in remarks at commemorative rites held at Ayala Museum on Saturday afternoon.

It was an example of tolerance, said Kerblat, a lesson that the world needs more than ever today, with global refugee figures at a record high as tens of millions escape persecution out of conflict-stricken countries like Syria, Mali, Yemen and South Sudan.

“What was unique in the act [of President Quirino] was that it was the first time that a state, barely independent, busy with reconstruction, could act and show to the rest of the world to say that ‘we, the Philippines, we care to welcome our brothers and sisters,’” Kerblat said.

In the documentary “Tubabao Odyssey: Refuge in the Philippines” launched during the program, the Quirino foundation put together stories of former refugees now scattered across the world.

The film was based on the research of Kinna Kwan, the daughter of former Guiuan Mayor Annaliza Gonzales Kwan, who had heard about the refugees in her hometown while she was growing up. It showed the blossoming of the refugee community on what had been grassy land, becoming a neighborhood where artists, musicians and actors emerged.

Former refugees interviewed for the film recalled Guiuan’s beautiful sunset, even the smell of wild flowers that scented the air. Local residents remembered swapping flowers for American bread, and even getting piano lessons from one of the Russians of former nobility.

The community had a school, churches for different denominations, a hospital and an orphanage, among others. For a while, it was surrounded by fences, which were ordered removed by Quirino, who said the Russians were “not in a camp, but in a community.”

It was a time in history that is largely forgotten today, Tabolina said. “The story of Tubabao and the Philippines is almost forgotten … . It is important for us to have in our souls, our minds, the past as inputs for our children, and we should also move to the future.”

Tabolina and Sabelnika proposed to work together with the Quirino family to recount the Russian migration to the Philippines more than 60 years ago. “If our plans are to be fulfilled, we may think about such project to show the whole world what happened,” Tabolina said.

During the program, the Russian guests handed over to the Quirino family gifts from their homeland, including scarves, candies and vodka. Renowned Russian folk singer Nikolai Massenkoff, also a former refugee, also rendered a performance with the Manila Symphony Orchestra.

Former President Fidel Ramos encouraged the new generation of Filipinos to carry on lessons from Quirino’s life. At one point in his speech during the event, he urged his audience to hug and kiss those beside them as an expression of fellowship.

“The lesson I’d like you to take way from here aside from being hospitable to strangers, aside from honoring great public service of all our leaders, is that the Philippines is known for not only struggle—we have struggled for so long to win our freedom, independence, and to establish our democracy—but also to become a model in the world of the 21st century in terms of caring, sharing and daring,” he said.