Chilean president is first to arrive

MICHELLE Bachelet, the first woman president of Chile, stepped out of the plane on a drizzly Sunday afternoon at Ninoy Aquino International Airport (Naia) as the first head of state to arrive for the Asia-Pacific Economic Cooperation (Apec) summit in Manila.

Bachelet’s plane landed a day after President Aquino ordered security officials to ensure the safety of world leaders and “everybody’s peace of mind” in response to “serious worry” provoked by terrorist attacks in Paris on Friday.

“The President said it’s important that our country is safe during this gathering and to ensure everybody’s peace of mind,” Communications Secretary Herminio Coloma Jr. said in an interview on government-run Radyo ng Bayan.

Mr. Aquino’s orders “centered on improving overall security during the Apec Economic Leaders’ Meeting this week in the face of the serious worry brought about by the Paris terror attacks on Nov. 13,” Coloma said.

Malacañang said Mr. Aquino gave the directive to members of his Cabinet security cluster as part of preparations for the Philippines’ hosting of the Apec meet that would gather the heads of state or representatives of Apec’s 21 member economies.

Seventeen world leaders, including US President Barack Obama, Chinese President Xi Jinping and Japanese Prime Minister Shinzo Abe, have confirmed their attendance at the Apec Economic Leaders’ Meeting on Nov. 18 and 19. The leaders of Indonesia, Russia and Taiwan have opted to send deputies.

Given the jitters and security concerns arising from the Paris attacks, none the 17 Apec leaders expected to attend the summit have backed out, Foreign Undersecretary Laura del Rosario said Sunday.

Bachelet, who is also in the country for a state visit, was unfazed by the light rain as she disembarked at Naia Terminal 2, her arrival heralded by a marching band and the honor guard lining both sides of the red carpet.

Her estimated time of arrival in Manila changed several times, from 4 a.m., to 10 p.m. before it was set at noon. But her flight was slightly delayed and the Boeing 767 of Fuerza Aerea de Chile (Air Force of Chile) landed on the Naia runway at 1:24 p.m.

There was none of the traditional 21-gun salute as is customary for visiting heads of state for Bachelet, who was immediately escorted to her waiting car.

Bachelet is the first president of Chile to win a reelection since 1932. President from 2006 to 2010, she again won the post in 2014. She is also the only Latin American woman to win the presidency who is not the wife of a previous political leader.

Before serving as president, she was minister of health and of defense under her predecessor, President Ricardo Lagos.

Her family was detained when Gen. Augusto Pinochet seized power in September 1973 and they were reportedly subjected to interrogation and torture until January 1974. Bachelet was able to go into exile in Australia. 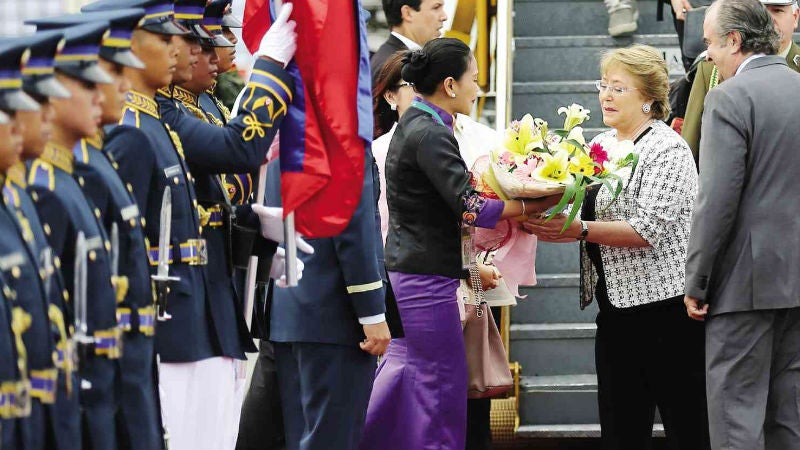 WELCOME RITES Chilean President Michelle Bachelet arrives in Manila on Sunday for a state visit to the Philippines and to attend the Asia-Pacific Economic Cooperation summit on Nov. 18 and 19. RAFFY LERMA

When Pinochet died in December 2006, Bachelet denied the dictator a state funeral. But she gave him a military funeral as the former army commander in chief of President Salvador Allende, who died during the military coup led by Pinochet in 1973.

Coloma said Mr. Aquino was personally looking at all aspects of the preparations for the Apec summit, especially the security of the public and the visiting leaders and representatives of other countries.

He said Mr. Aquino also sought assurances from his Cabinet that the Armed Forces of the Philippines and the Philippine National Police would be adequately prepared to keep the peace and maintain order in the premises of the Apec meet.

The leaders’ summit will be held at the Philippine International Convention Center (PICC) in Pasay City.

Mr. Aquino convened the meeting of his security officials on Saturday as news broke about the series of attacks in Paris. At least 129 people were killed in shootings and bombings in six public places, including a concert hall and outside a football stadium.

Although there were no major changes in the security protocol for the Apec meetings, law enforcement agencies have increased the visibility of their personnel in the venues where the events will be held, as well as all over the country.

“At present, security forces are positioned in Metro Manila beyond the regular deployment scale. This should add to the peace of mind and level of confidence of our people and provide much optimism for a fruitful and orderly Apec 2015 summit,” Sarmiento said.

The AFP said the beefed-up security measures were also in consideration of the terrorist attacks in Paris.

“We are studying what happened in Paris, and making sure that our security preparations are adjusted for things like that. We have covered those kinds of scenarios, so we only need to increase our visibility in all areas, especially in Apec areas,” said military spokesperson Col. Restituto Padilla.

The increased visibility of personnel from both the AFP and the PNP has been implemented all over the country since Saturday, when both law enforcement agencies raised their alert level to the highest earlier than usual.

On Saturday, Security Task Force Apec held a quick-response drill at the PICC to demonstrate its readiness for worst-case scenarios, like terror threats.

Last night, Gazmin assured the public that the government was preparing for all contingencies and that so far authorities had not seen any security threat to the summit.

Gazmin along with Ochoa, Iriberri and Coloma dropped by for a surprise check at the World Trade Center in Pasay City where the International Media Center for the Apec summit was housed.

Asked about the security preparations given last Friday’s Paris terror attacks, Gazmin said: “We are preparing for all contingencies and that is why we’re doing our last-minute checks, making sure that no stones are left unturned.”

Coloma said it was important for the Philippines to host the Apec meeting successfully, as it was seen to bring new focus on the country as a favored tourism and investment destination.

Before the leaders’ meeting, Apec ministers for trade and foreign affairs will meet starting today, with the Apec Ministerial Meeting opening its session at 1:30 p.m.

Mr. Aquino will make his first appearance at the Apec meetings at 3:30 p.m. today at the Makati Shangri-La hotel, where a “summit conversation” with him will be held and where he is expected to talk about “Apec’s Inclusive Growth Imperative.”