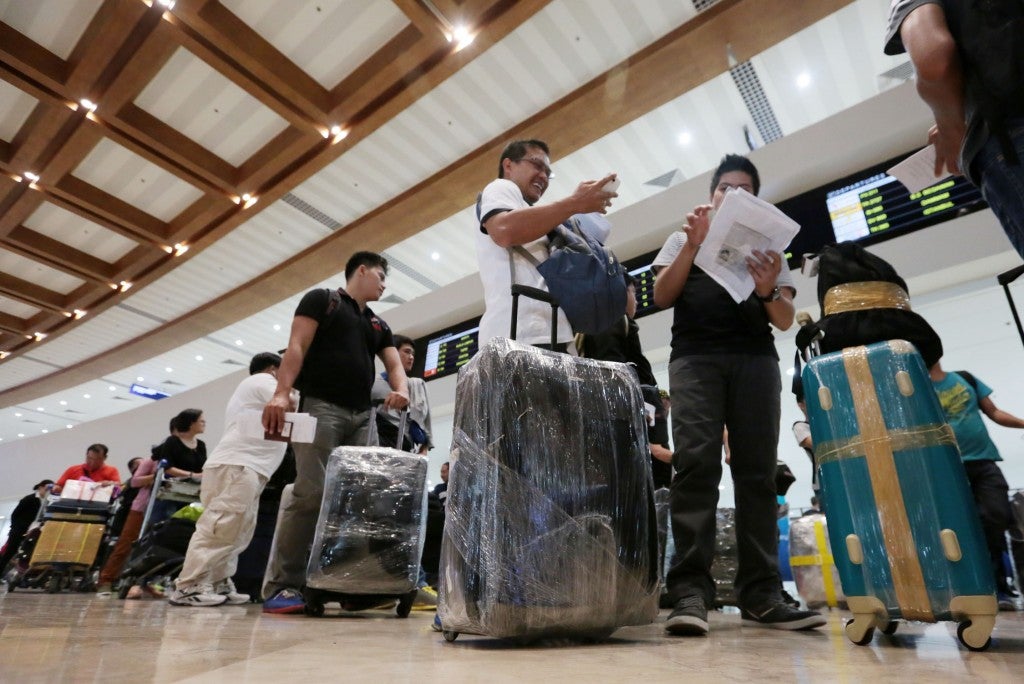 Departing OFWs with their wrapped baggage wait in line to check in at the Ninoy Aquino International Airport (NAIA) terminal 1 on Monday, November 2, 2015.  INQUIRER FILE PHOTO

Caught with a bullet at the airport? You may now page a prosecutor on site and explain your situation.

The Department of Justice (DOJ) has deployed a duty prosecutor at Ninoy Aquino International Airport (Naia) to undertake an initial assessment of cases, recognizing that the wave of “tanim-bala” (bullet-planting) incidents has become an “emergency situation.”

“What we’re trying to do is we’re trying to avoid incidents where passengers are not allowed to board [their flights] because there’s a suspicion that they are carrying bullets,” said DOJ spokesperson Emmanuel Caparas.

“The fiscal is there to find out: What were the circumstances surrounding the discovery of the bullet? Is the passenger really a known carrier or was this just an accident?” he said.

The DOJ has taken the initiative in light of reports that the bullet-planting scam has brought unwarranted international attention to the Philippines ahead of the country’s hosting of the Asia-Pacific Economic Cooperation leaders’ summit next week.

Caparas said a pool of prosecutors has been assigned for Naia duty, covering all four Naia terminals at peak operation hours starting on Nov. 4.

“This is an emergency situation because there are actual people whose rights are already being affected… More people are going to be affected. We don’t want that to happen. It sends the wrong signal and it affects the lives of people unnecessarily and unfairly,” Caparas told a press briefing yesterday.

National Bureau of Investigation Director Virgilio Mendez on Friday said the bureau would be conducting a “deeper investigation” into the bullet-planting cases as the incidents have reached a worrisome level.

Two more departing passengers were charged by police on Friday after bullets were found in their luggage at Naia.

However, the charges of illegal possession of ammunition against Jervin Pobre Reyes, 27, and Ronalyn Gabriel, 27, were later junked by the Pasay Prosecutor’s Office, citing the two passengers’ absence of “intent to possess” the bullets.

Reyes, who was on his way to Puerto Princesa, was the first to be accosted by authorities at Naia Terminal 4 at 2:15 a.m.

According to an incident report at the Philippine National Police-Aviation Security Group, Reyes was turned over to the Intelligence and Investigation Section of the Aviation Security Unit-National Capital Region (AVSEU-NCR) after a .45-cal. bullet was found “glued” to the inner pocket of his red bag.

The discovery was made during a manual inspection of the bag by security screening officer Marlon Baylon and PO1 Reynaldo Abona, in the presence of Reyes.

Baylon and Abona had been previously informed by X-ray operator Noel Silvoza that he saw what appeared to be a bullet inside Reyes’ bag in the monitor.

According to the police, Reyes admitted to owning the bag and being a gun owner.

However, he failed to present a renewed gun license and permit to carry a firearm, the report said.

According to a separate incident report, Gabriel, who was on her way to Hong Kong, was turned over to the AVSEU-NCR after a 5.56-cal. bullet was discovered inside her shoulder bag that had the markings “Sophie Martin.”

The bullet was found by security screening officer Ma. Nazla Asombrado, who conducted a manual inspection of the inside of the bag in the presence of Gabriel.

Asombrado did this after she was alerted by her coworkers about the appearance of what looked like a bullet inside Gabriel’s bag in the X-ray monitor.

Mendez said he found it very disturbing that incidents of passengers caught carrying bullets are still frequent and even escalating despite prominent media reportage that carrying bullet-shaped or bullet amulets is prohibited.

“The frequency of incidents and number of cases are escalating, it’s undeniable that there’s a problem that is disturbing,” he said.

Caparas said the airport procedure would resemble an inquest proceeding.

“The job of the fiscal is to determine whether, given all the facts, he has enough grounds to detain the passenger. If he does not have enough grounds, then it is incumbent upon him to allow the passenger to depart,” said the official.

If necessary, further investigation would be conducted, particularly if the bullet is found to have just been planted.

However, Caparas said the airport procedure would not be exactly the same as an inquest proceeding, where the prosecutor determines if there is probable cause, or whether or not to elevate the case to a court for trial.

“You are not really looking for probable cause. For example, one passenger is found to be carrying a bullet. What the fiscal will do is ask the circumstances under which the bullet was found, if someone touched the baggage, if the bullet was taped or stitched into the bag, or if it’s just there inside the bag or one of the pockets where it’s easy to plant,” he said.

“Please understand that this has to happen within the space of whatever time is left for the passenger to board the flight. But of course, we are not going to rush it,” he said.

He underscored the need for immediate decisive action on the tanim-bala cases and for a long-term solution.

“If our response is weak, then [the incidents] will happen again. We have to show people that we are very serious, and that plan is not for short-term but for long-term solutions,” Caparas said.

Mendez said he would be asking Justice Secretary Alfredo Benjamin Caguioa for an extension of the Monday deadline to submit a full report on the investigation as the bureau was finding some difficulty in obtaining evidence and records. The NBI has so far given the DOJ only a partial report.

“We still need records and more evidence from other government agencies to complete the process of the investigation,” he said.

He said most of the problems encountered had to do with obtaining records from the transportation office and the airport police, though they had been promised full cooperation.

Caguioa who was the guest speaker at the NBI’s anniversary celebration yesterday said he was not aware of the request but is inclined to approve it.

Mendez declined to disclose the status of the investigation, but said investigators have started to piece together the tanim-bala scheme.

“There are still many details, angles and leads that we have to follow to come up with a comprehensive report that would include the identities of the culprits to be able to file criminal charges that could satisfy the quantum of evidence,” he explained.

He said the investigation would cover records of previous years to be able to establish a pattern.

Mendez declined to comment on the “supposed manipulation of the bullet-planting syndicate at the airport for another purpose rather than extortion.”

“We will look into it and we will have the answer after the investigation,” Mendez said.

He added that records going as far back as two years would be scrutinized and all confiscated evidence will undergo forensic analysis.

Mendez said the investigation would be focusing on, among other things, looking at the seized evidence and cross-referencing them with records and statements.

Santiago, who is running for President in the May elections, said she would file a bill to amend the Comprehensive Firearms and Ammunition Regulation Act in order to impose longer jail terms for those caught planting evidence.

The law currently imposes a prison term of six to 12 years on those caught planting evidence, except when the person concerned is a public official or employee, in which case the penalty is 20 to 40 years.

Santiago proposed that the prison term for persons other than pubic officials or employees involved in the planting of evidence be increased to 12 to 20 years.

“The government must send a clear message to these airport syndicates that it will not tolerate these criminal activities and will prosecute those who plant evidence with as much zeal as it pursues those who smuggle firearms and ammunition,” she said in a statement.

Santiago said decriminalizing the possession of a few bullets may not be effective in eliminating the bullet-planting scheme since those involved could just increase the number of ammunition they place in passengers’ bags.

Meanwhile, Pangasinan Rep. Leopoldo Bataoil, a former police official, is urging Naia employees to blow the whistle on fellow airport employees involved in the tanim-bala scam for the good of the country.

In a Nov. 3 privilege speech at the House of Representatives, Bataoil asked the airport employees to contact his office and inform him of unscrupulous activities at the airport.

“If you don’t, you will be seeing the Filipino people branding your entire organization, even the remaining innocent and hardworking airport employees like you, as criminals,” he said.

“As a [retired] police general, I am angered by these issues because the profiles of those arrested are clearly [not] those of criminals and syndicate members,” said Bataoil, who last served as a police director.

Bataoil said airport management should make sure all its employees go through metal detectors before starting work. He also urged employees to undergo values orientation because “they are our country’s frontliners to foreigners, investors and tourists.”

He said officials who allowed the scams to happen under their watch should be fired. With reports from Leila Salaverria; and Johanne Margarette Macob, Inquirer Northern Luzon