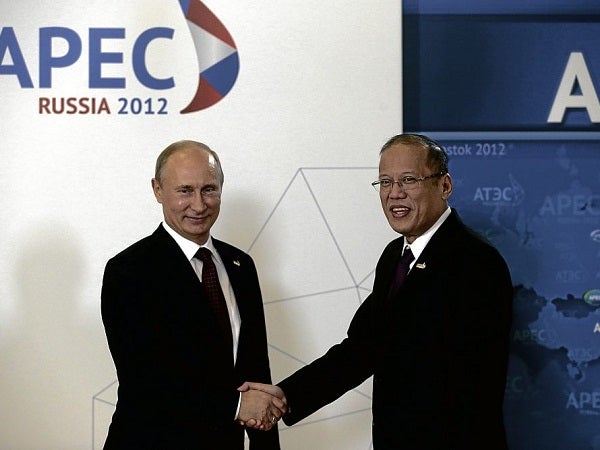 Putin said “domestic issues,” particularly the investigation into the crash of a Russian jetliner in Sinai Peninsula in Egypt that killed 224 people, mostly Russians, last month, required him to stay at home, the Palace said.

Deputy presidential spokesperson Abigail Valte said at a press briefing that Presidents Aquino and Putin discussed “matters related to the Philippines and Russia bilateral cooperation” and “the participation of Russia in the Apec summit in Manila.”

“President Putin also discussed with President Aquino the reasons for his inability to attend the Apec summit, to which President Aquino replied that he understood fully well the issues confronting the Russian government, and that he also understands the need of President Putin to stay in his country to ensure that the reasons behind some of their domestic issues are fully investigated and threshed out,” Valte said.

Manila hosts this year’s Apec summit, where leaders of the 21 member-economies gather to discuss policy issues aimed at advancing the region’s economy.

The Indonesian foreign ministry confirmed on Thursday that Widodo is not attending the summit, while the Taipei Economic and Cultural Office (Teco), the de facto Taiwanese Embassy in Manila, announced Ma’s decision not to come on Friday.

Russian Prime Minister Dmitry Medvedev will represent Putin at the summit, but Malacañang said it had yet to receive a “formal confirmation” on who would represent Widodo at the Apec leaders’ meeting.

Valte said Putin mentioned the investigation into the crash of a Russian jetliner in Egypt, which required his presence at home.

“The President did extend his understanding on the loss of life and recognized fully well that it is a cause for concern for President Putin,” she said.

The official cause for the crash of Metrojet Airliner Flight 9268 has yet to be determined but US and British officials say the cause of the Oct. 31 crash was likely a bomb planted on the plane.

Both Russia and Egypt maintain that terrorists were not behind the aircraft’s crash.

The Islamic State jihadist group has claimed responsibility for the crash, but Russian and Egyptian officials say the terrorist group does not have the capability to shoot down an airplane.

Valte said Widodo would also almost likely be unable to attend the Apec summit due to pressing matters in Indonesia, but the Philippines was still awaiting a “formal confirmation” on who would represent him.

“It is quite [regrettable] that President Joko Widodo will most likely be unable to attend the summit. We understand that the pressing matters back home require his immediate attention,” Valte said.

The Associated Press reported on Friday that Indonesia’s foreign ministry spokesperson Arrmanatha Nasir had confirmed that Widodo would miss the summit because of several issues, including preparations for regional elections. Kalla would represent Widodo at the summit, AP said.

The Department of Foreign Affairs (DFA) confirmed on Friday that Putin and Widodo are skipping the summit.

But Assistant Foreign Secretary Charles Jose, spokesperson for the DFA, said the two leaders’ representatives would participate in the summit with “full powers.”

Taiwan customarily sends an appointed government official instead of its president to the Apec leaders’ meeting due to China’s objections.

It became a member of Apec in 1991 as Chinese Taipei. One criterion for membership is that a candidate must be a separate economy. China considers Taiwan a breakaway province.

Teco said in a statement that Ma’s representative, Siew, was “well versed in economic and trade diplomacy and multilateral trade negotiations.”

Siew, according to the statement, has attended Apec meetings six times as minister of economic affairs and presidential representative, “and has built strong relationships with leaders of other Apec members.”

While the agenda of Apec is purely economic, Taiwan says in a briefer posted on its government website that there are times when politics interferes with its participation in the summit.

Taiwan’s rights as a member of Apec as well as the contributions it can make are sometimes limited because of political pressure from Beijing, its political rival, according to a 2003 article, “Taiwan rises to the Apec challenge,” posted on the government website.

In 1999 and 2002, for example, Taiwan was not allowed to participate in Apec counterterrorism meetings, the article said.

Taiwan is also not allowed to host regional leaders’ or ministerial meetings, it said.

Former President Chen Shui-bian was shut out of the Apec summit, it added.

“The host country of the meeting will send an invitation to the president of the [Republic of China], who is expected to follow the ‘established practice’ by sending a Cabinet minister or business leader on his behalf, instead of attending the meeting himself,” the article said.

According to Teco, Ma appointed Siew because of the former vice president’s “expertise, background, experience and connections.”

These, it said, will undoubtedly substantially enhance Taiwan’s influence in the Asia-Pacific region.

Only 22 countries recognize Taiwan as a state.

The Philippines, which upholds the “one-China policy,” maintains economic and cultural relations with Taiwan through Teco. With a report from AP