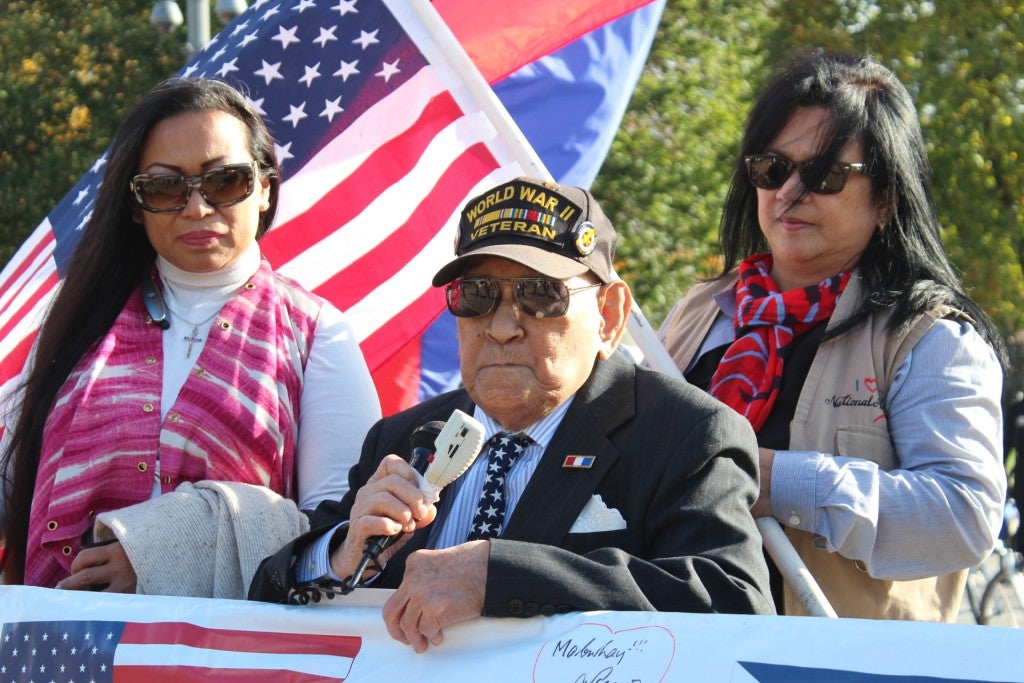 WASHINGTON, D.C.–Celestino Almeda of Gaithersburg, Maryland, doesn’t remember the number of times he has protested in front of the White House since arriving in the area in the 1990s.

But the 98-year-old Filipino World War II veteran has not forgotten America’s promise when 260,000 young men were recruited to fight with the U.S. Armed Forces in the Far East (USAFFE) more than 70 years ago.

On Veterans Day, November 11, Almeda chose the White House to once again remind America of that promise. He also had a personal case to make against the Veterans Administration.

Seated in a wheelchair and speaking to a bullhorn, the disabled and ailing veteran directed his plea to President Obama, asking him “to find out why the VA secretary has not acted” on the appeal of more than 4,000 Filipino veterans, whose claims for benefits have been denied.

These claimants, including Almeda, were deemed “ineligible” to receive amounts from the Filipino Veterans Equity Compensation (FVEC) Fund because they lacked proper documentation.

Under FVEC, one-time lump sum payments of $15,000 and $9,000 were to be distributed respectively to each Filipino World War II veteran residing in the U.S. or living in the Philippines. Of 41,000 veterans’ claims filed, about 18,000 have already been granted.

To pursue his case, Almeda has met face-to-face with VA Secretary Robert A. McDonald and other VA officials more than twice in the last four months to discuss his US Army WW11 credentials. 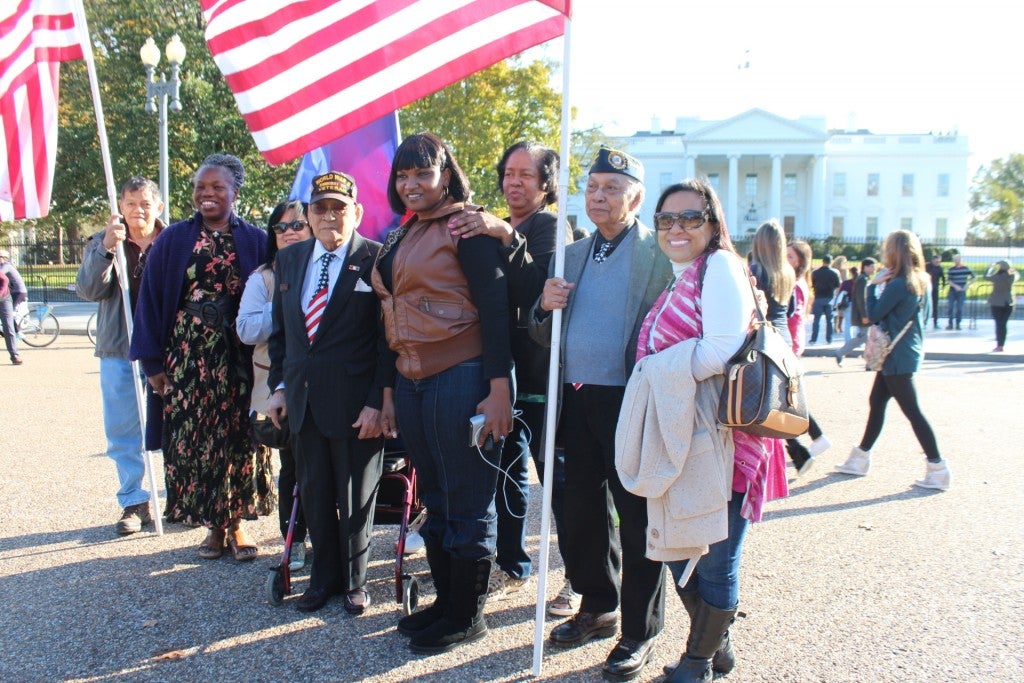 Filipino World War II veterans and their families gather in front of the White House to commemorate Veterans Day with a statement to President Obama.

“The VA Secretary has the discretion to accept my service documents and approve my claim,” Almeda explains. “But he has not acted on it, that’s why I’m appealing to President Obama.”

Joining Almeda was another Filipino World War II veteran, Rudy Panaglima of Arlington, Virginia, and the sons and daughters of other veterans who have died. Angelyn Tugado-Marzan’s father, Dr. Angelesio Tugado, passed away in 2013, while Judy Ann Morris’ dad, Guillermo Rumingan, died more than 10 years ago.

Almeda, Tugado and Rumingan and a dozen of their comrades used to walk the halls of Congress lobbying for equity bills. Some of them got arrested chaining themselves to the White House fence, prompting then President Bill Clinton to address some of their concerns. But all they got were burial benefits.

“We are here to stand in solidarity with Mr. Almeda,” Tugado-Marzan said at the White House Veterans Day protest. “It is not fair that he is being treated unjustly simply because his records do not meet the eligibility requirements that were arbitrarily set up by the U.S. Army.”

Almeda’s son, Robert, was on his father’s side when he made his plea to President Obama. “He is the commander-in-chief, so I’m hoping he listens and does something soon. My father has only a few years to live and he wants to receive his final recognition before he fades away.”

It is a small consolation, but legislation is pending in Congress to rectify this situation. In January, U.S. Senators Dean Heller (GOP-Nevada) and Mazie K. Hirono (Dem-Hawaii) introduced the Filipino Veterans Promise Act to Congress, a bipartisan legislation, which will establish a process for all eligible Filipino World War II veterans to receive compensation for their service to the United States. 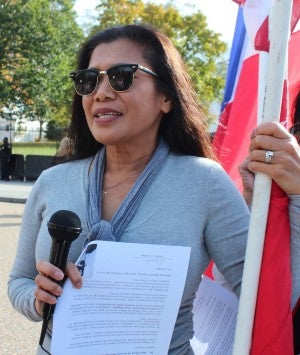 Lt. Col. Annie Mapanao Chichocki of Colorado Springs says people who serve in the Armed Forces make huge sacrifices and they should be honored and recognized for defending our country.

The act would direct the Department of Defense and the Department of Veterans Affairs to consider other measures that would help determine whether certain individuals, who are not already on an official list, might qualify for the FVEC lump sum payment.

“Unfortunately, many Filipino veterans have yet to receive the benefits they earned and deserve,” said Heller. “This bill helps fulfill America’s promise and ensures these veterans are treated fairly and with respect.”

Added Hirono: “We have heard the stories of how numerous Filipino soldiers were afraid to record their names during WWII, for fear the enemy would obtain roster lists and retaliate against them. This legislation would provide Filipino WWII veterans a process to prove that they indeed served and are eligible for the benefits they’ve been promised.”

After World War II, the US Army created the so-called “Missouri List,” based on the individuals who came forward after the war to receive health care benefits. The list has been used by the military to certify eligibility. 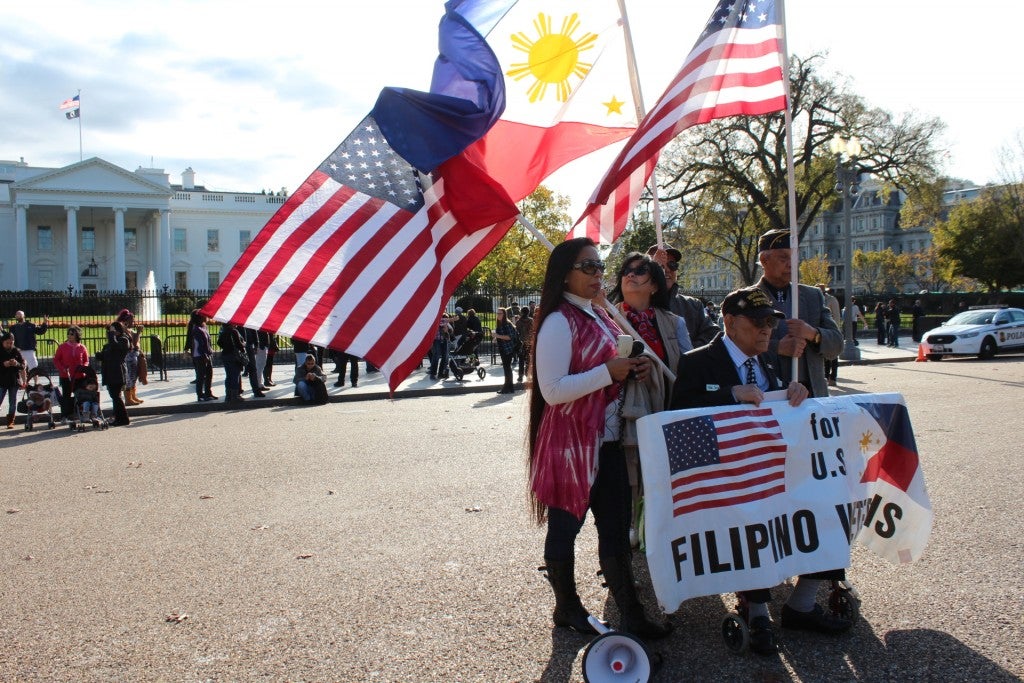 With the Philippine and US flags waving in the air, Filipino World War II veteran Celestino Almeda, along with sons and daughters of deceased veterans, wait for other demonstrators to join them at the White House on Veterans Day.

Heller and Hirono and others believe it is possible that some Filipino veterans who fought in the war alongside U.S. troops were not added to the list and could be improperly denied benefits.

There are no indications as of yet when the bill will be taken up for a vote. In addition, a family reunifications bill and the Filipino Veterans Congressional Gold Medal Act, are also still pending in Congress.

After Almeda finished reading his appeal to Obama, several tourists who stopped to listen, approached the veteran to thank him for his service and pose for pictures.

Lt. Col. Annie Mapanao Chichocki and Rose Almine Stegmayer of Colorado Springs shook Almeda’s hand and assured him of their support. “I’m glad I stopped by the White House and saw the demonstration,” said Chicocki, who has a military administrative job at the Pentagon. “People who serve in the Armed Forces make huge sacrifices and they should be honored and recognized for defending our country.”

Angie Skinner, an African American, said her daughter is a U.S. Army captain and her son is an ex-Marine. “I just had to come over and express my gratitude,” she told Almeda. “We are a military family and I know this country is proud of her sons and daughters who are sent in harm’s way. As a mother, I can relate personally to your story.”

Almeda accepted the words of thanks gracefully and urged all his well-wishers to “please support our cause.” The Veterans Day action was organized by the American Coalition of Filipino Veterans (ACFV).