On Veterans Day he was out in the cold at Lafayette Park, right in front of the White House gate to read aloud his protest letter to anyone who would listen.

You see, the president signed something in 2009 called the American Recovery and Reinvestment Act of 2009.

That was the stimulus package. Like a big turkey, it’s stuffed with goodies for all good politicos and constituents; and finally in 2009, there was something for Filipinos: the Filipino Veterans Equity 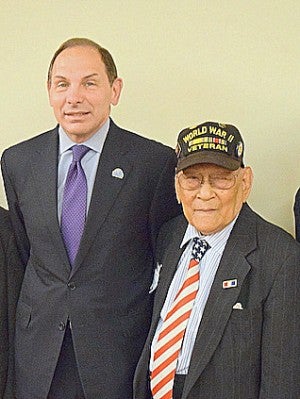 As of August, here are the numbers:

It amounts to a payout of over $224 million awarded to eligible Filipino Veterans. Before you jump for joy, go over the numbers.

In other words, if you’re a Filipino vet of WWII, or think you have a claim, just toss a coin.

It’s better odds than Keno, but with Keno you might get lucky and win a whole lot more. That’s what it’s been like for the vets the last six years.

Many of the 23,804 were denied because they truly were ineligible. You must be a surviving spouse or widow. No kids.

But the biggest fixable issue is whether you are a verifiable vet, with legit documents from both the Philippines and the U.S.

It’s tougher than you think considering how documents in the Philippines were lost during the Japanese occupation.

Of those 1,253 have been denied again as of August. For those folks, that’s it—end of the road. War over.

But that leaves about 3,000 that are still being processed. Still hopeful. Still alive. One of them is Almeda.

Almeda knows about the broken promise of Roosevelt that brought him as a member of the Philippine Commonwealth Army to fight side-by-side with the U.S. Army. He’s got pay stubs and a formal discharge to prove it.

His documents are good enough to be made whole on some of the FDR promises that were broken when President Truman signed the Rescission Act of 1946.

Almeda was granted citizenship in the ‘90s, and in 2003, began getting VA medical benefits. He has a VA card to prove it.

But none of that is good enough for the VA to approve him for the lump sum payment.

When I talked to him last year he had testified in Washington, D.C. before a Congressional subcommittee. There’s no doubt in his mind he served.

“I was called to duty when the Japanese invaded the Philippines,” he told me. “I have in my own personal records all the documents to support that I am a veteran from the beginning to the end.”

This year in June, Almeda met with Sec. Robert McDonald of the VA and even posed for a picture. Almeda said McDonald promised to get back to him.

So far on Veterans Day, Almeda has heard nothing.

Since then, a case in the U.S. Court of Veterans Appeals has determined that the VA secretary does have the right to use his “discretion” on the evidence provided by veterans like Almeda.

In a memo to the VA, veterans advocate Eric Lachica asked for clarification on the discretion that Secretary McDonald has in deciding which documents will make veterans eligible.

“When will you make your recommendation? As you know, an FVEC claim would be worthless if the veteran dies and has no surviving spouse,” Lachica wrote in his memo to the VA about Mr. Almeda.

“If you recall, Secretary McDonald personally assured Mr. Almeda he would expeditiously consider his appeal by forming your review team to make recommendations to him,” Lachica wrote further.

Almeda’s case may be the one that could resolve the document snafu that has stymied thousands who are appealing denials.

After all these years, Almeda still has it in him to keep fighting the good fight.

He has made it his mission most of his adult life to be made whole after the Rescission Act. At age 98, time used to be on his side. But for how much longer?

VA Secretary McDonald should use his discretion in Almeda’s case. Accepting his documents, granting him the one-time lump sum payment wouldn’t just be the right thing, but the humane and honorable thing to do.

Emil Guillermo is a native San Franciscan and award-winning journalist and commentator.