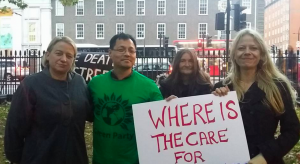 LONDON–As elections for the UK’s upcoming London Assembly in May 2016 begin to gather speed, one Filipino-British contender hopes to secure a seat and incite change, starting locally.

Manila-born Lorenzo ‘Obi’ Abadinas – also known as Raymundo Obedencio, the name he will be officially campaigning under – is a British citizen in the running as a candidate for the Barnet & Camden constituency in the London Assembly elections.

Abadinas will be running under the Green Party, whose ideology includes green politics, environmentalism and eco-socialism. The Green Party is considered to be one of the UK’s biggest left-wing parties, alongside the Labour Party.

The hustings for the Barnet & Camden Green Party will take place on November 12 in North London. The winner will be announced November 26.

Born in Makati, Abadinas moved from the Philippines to the UK in April 1983, just before his 13th birthday, spending the remainder of his teenage years in London. In 1999 he joined the Territorial Army, the active-duty volunteer reserve force and cohesive division of the British Army, serving for ten years.

Today Abadinas, by profession a builder and carpenter, is a passionate political activist and a member of Occupy London, an anti-capitalist offshoot of the greater Occupy movement, the international branch of the Occupy Wall Street movement that campaigns against socio-economic inequality worldwide.

There are currently two elected Filipino Councillors standing in the UK. These include Danny Favor, Town Councillor for Ashplats Ward in East Grinstead, and Cynthia Barker, who was elected for dual positions as Town Councillor for Elstree and Borehamwood, and Borough Councillor Potter’s Bar Furzefield in Hertsfordshire, respectively. 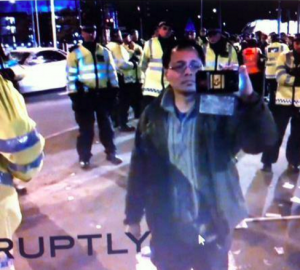 Should Abadinas be elected, he will be the third British-Filipino to stand in the local political scene. As the number of Filipinos involved in local UK politics continues to multiply, perhaps in a few years Filipinos could aim to put a compatriot in the Houses of Parliament and be involved in UK politics on a national scale.

Below is an INQUIRER.net Q&A with the candidate:

Tell us about the position you running for.

I’m running for the London Assembly, which represents London and advises the mayor. If I get picked, I’ll be running against Andrew Dismore, with the Labour Party, who is the Barnet & Camden representative in the London Assembly at the moment. This position is important because you get to vote for mayor. Sian Berry is standing [for mayor] under the Green Party. Hopefully I have a chance [laughs].

When did you first get interested in politics, and why did you decide to get involved in UK politics particularly?

I was seeing and reading things on the news, in newspapers, in books, but I didn’t get involved. I was more of a keyboard jockey for a few decades. I didn’t get actively involved until I joined the territorial army where, in 2003, I took part in the British Stop the War Coalition (StWC) campaign. 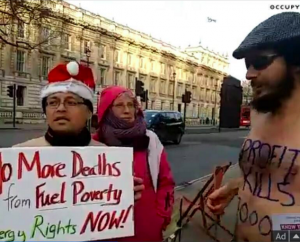 What made you take the step from keyboard jockeying to real life activism? Can you share more about your work with Occupy?

I joined Occupy London in 2011. Initially, I was on YouTube watching videos for Occupy Wall Street. Then I saw on Facebook that an Occupy London was happening in relation to the stock exchange. I stayed with Occupy London for four and a half months and carried on from there. At first, I was mainly part of the sanitation team, keeping the place clean, learning about politics.

I thought I knew about politics at first but then realized I knew more about American politics, and less about British politics. So four months at Occupy London gave me a number of lessons that were very useful. I was constantly learning and I attended some lectures. [Later on] some people ran for the Green Party, and I ended up joining. Regarding this upcoming election, I was the only one from Barnet who actually put their name forward. They extended the nominations so more people could join.

Why join and represent the Green Party? What ideologies of theirs particularly resonate with you?

For me, it’s their eco-socialist tendencies. That’s my kind of work. I do building work. At the same time, the Green Party is supportive of the VAT being reduced 5 percent for house renovations. Labour and so on are more supportive of the big buildings getting 0 percent VAT. I’m a small business, and if they were to lower the VAT, it would be very helpful for people like me. Of course, on a global level, there’s also their fervent support for issues such as climate change, renewable energies, and so on. The effects of climate change will be widespread within the next ten years, and it will be Asia, the Philippines, that will be impacted the most by it – and also London. But everyone’s ignoring it.

As a side question, what do you think about Rupert Murdoch, the man who denied climate change as “alarmist nonsense,” purchasing National Geographic?

The media has a very one-sided perspective. I mean, consider the British-Filipino nurse [Victorino Chua] who ended up murdering people. The media tried to slander all the Filipinos in the UK as murderers, or potential murderers. Unfortunately, they don’t like immigrants. They only tend to support people who are white, middle-class and male, which is quite sad really. I’ve gotten the usual slurs before – the “why don’t you go back to your own country,” that kind of thing.

This is the reason I decided to run with the Green Party. They were saying they needed black and ethnic minorities to step forward and help represent, because most of the people standing forward are white. The Green Party has a lot of Irish and Jewish people. At least one Filipino, I think, is a good thing.

What changes do you hope to implement in your potential position, locally?

The main change I’d like to tackle locally is housing. Personally, I’ve squatted, been homeless, been in council housing, done couch-surfing. I’ve even owned a flat with my brother at one point. More housing for the average person is what I want to implement. [I want to] stop all these property developers buying up everything from councils – with councils selling them off for a pittance – and “normal” people ending up homeless. It’s a crazy situation. I’ve been reading articles about properties in Central London standing completely empty.

It’s difficult for the mayor to lean on central government and stop these things happening. Why don’t they stop foreign buyers purchasing empty properties in London and allow locals to actually buy a place? A friend of mine has a central flat and her rent is practically paying her landlord’s mortgage. That’s another thing: rent control. We need to bring it back. All major cities have it – Berlin, New York, even Hong Kong. It’s another thing we need to push for. Also land banking. People purchase land and sit on the plot for however long without making any changes. There should be a cut-off point saying, “OK, you have one year, and then you have to re-apply for planning permission.” That’s what I want to go for.

Do you hope that, if elected, your position will take you further?

I haven’t thought much about it! I’d like to be able to make changes, depending on whether I actually get voted in. I would like Labour voters to support Sian Berry (of the Green Party), because out of all the candidates she seems to be the one who represents “ordinary” Londoners the most, or the working class if you’d prefer to call it that.

The older candidates seem to be part of David Cameron’s home democracy. It would be wonderful for me to get in because I could do a lot of good, I believe. [I would] bring something radical into the system and make a change for the better. I’m concerned by the fact that in the media, minorities are being painted as freeloaders in the country – they get benefits, they’re stealing jobs. I can’t stand that distortion. I think the best way is to run for office and see if I can actually be in the media front as a British-Filipino.

Do you have strong support from the Filipino community in London?

I was thinking about that, but I don’t know. I would like to represent the Filipino-British community here, but a number of them still vote Conservative, in my point of view. My concern is for British-Filipinos. A lot of them plan on retiring here. I’d like to help the NHS continue existing, for them. I want it to still exist in 20, 30 years. Most Filipinos in the UK are in London. After the hustings, we’ll see what happens. If I don’t get the position, that’s OK. I can always help assist Sian Berry getting in. But yes, I would like to be able to represent the British-Filipino community as such, in London.- @melissalegarda