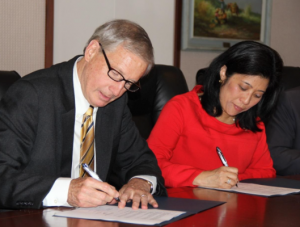 The US-Philippines Society (US-PHS) and the Silicon Valley Science and Technology Advisory Council (STAC) signed a Memorandum of Agreement (MOA) that institutionalizes the linkage between the two organizations in supporting technology-enabled entrepreneurship.

The memorandum was signed by US-PHS Executive Director Hank Hendrickson and Christina Laskowski, STAC president at the Philippine Embassy. The formal signing was witnessed by Philippine Ambassador to the U.S. Jose L. Cuisia, Jr., Christina Le of the U.S. State Department, US-PHS President John Maisto and other embassy officials.

The MOA cements the two organization’s collaboration in supporting technology-enabled entrepreneurship through STAC’s immersion programs, including its workshops, which will take place primarily in Silicon Valley, California. The MOA also creates a platform for the promotion of entrepreneurial growth and leadership in the Philippines.

As an initial project, both organizations early next year will launch a prototype Silicon Valley immersion program designed for the winners of the Philippine Long Distance Telephone Company’s (PLDT) SMART SME (Small to Medium Enterprise) Nation “BeTheBoss” 2015 competition. This is intended as a first-step in a continuing process of high tech exchanges. 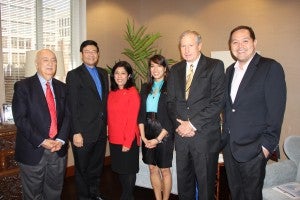 The program is designed to promote private sector-based Philippines-U.S. cooperation in the area of high tech education, business entrepreneurship and opportunities for expanded bilateral trade.

The PLDT Smart SME Nation, in collaboration with Rappler, had launched the very first #BeTheBoss Awards as a new kind of initiative, using social media to undertake a crowd-sourced search aiming to recognize next generation entrepreneurs at the frontiers of the information and communications technology revolution.

There were over 500 nominations from across the Philippines. Public voting came down to the 15 strong finalists selected in a rigorous panel process that identified three finalists in each of five categories: 1) E-Commerce; 2) Social Media; 3) Customer Service; 4) Social Responsibility, and 5) Mobile Readiness.

Five entrepreneurs were awarded as new Bosses on #BeTheBoss Awards night on Wednesday, October 28, at the Bonifacio Global City in the Philippines. Each of the five winners was recognized for pioneering efforts in modern technology.