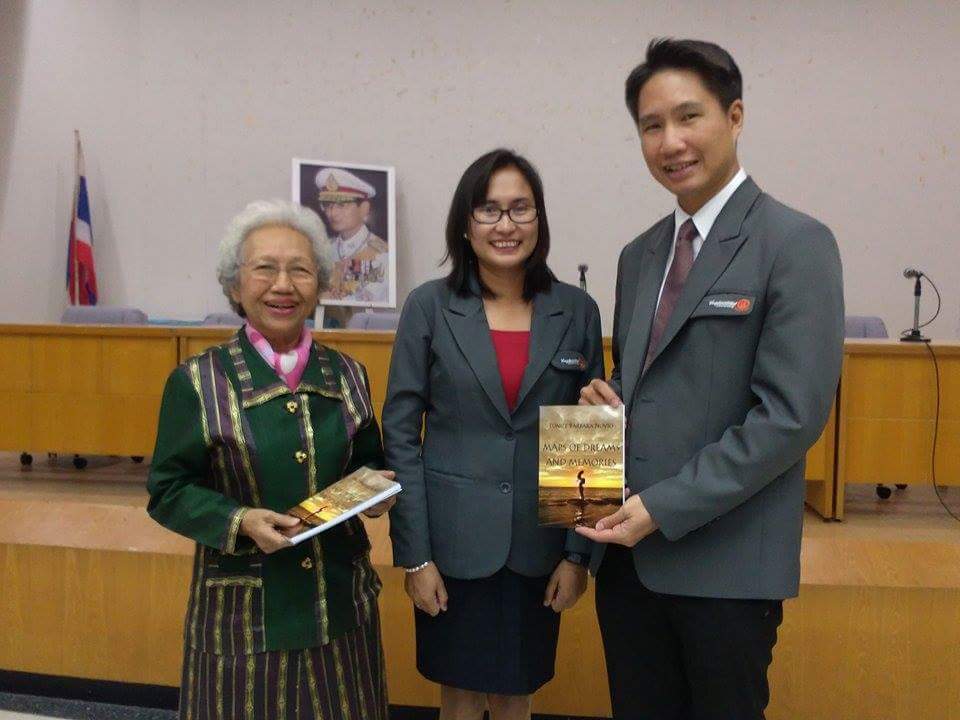 NAKHON RATCHASIMA, Thailand—“These poems represent not just occasions of craft or art – they are distillations of individual humanity. They are confessional, autobiographic, but also filled with a hard-fought and costly earned set of insights. Eunice is a teacher, a journalist, a crafter of words, scenes, moods, and startling observations of the depths of feeling and being that we would otherwise dismiss and take for granted, wrapped as they usually are in the mundane”, wrote Ramil Digal-Gulle, a Filipino award-winning poet, on the book Maps of Dreams and Memories, published by Aquirelle Publication in the United States. The book is a collection of poems and haikus by Eunice Barbara C. Novio, an Inquirer contributor and also a lecturer at Vongchavalitkul University in Thailand.

From Fiction to Poetry

Novio was a fellow of the 3rd UST National Writer’s Workshop in 2002. But before that, she was already writing fiction for Liwayway Magasin, a Tagalog magazine, and also for the Philippine Mirror Magazine.

“After I attended the workshop, I felt inadequate. I was beginning to edit my characters until they were all lost,” she says. In this workshop, she met Ramil Digal Gulle, already a Palanca Hall of Famer and a well- known writer, and Michael Coroza.

Instead of totally stopping to write, she found herself researching and writing features about women issues and feminist theology which were published in various international feminist journals.

“I started to write poetry in Filipino. I was inspired by Sir Michael Coroza and German Gervacio.” Novio says on her venture to poetry. But she says she only published those in Facebook.

Poetry as a Therapy

But writing poetry is not just a passion or a hobby for Novio. Having been diagnosed with anxiety disorder and depression in 2013, she has been undergoing medication and having sessions with a psychiatrist.

“I write poems and haiku every night. That’s a discipline. First, I posted them on Facebook. Whenever a friend celebrates a birthday, my gift is a haiku or poem,” she says.

She started contributing poems to various poetry sites and her works have been included in anthologies both online and in books like the latest the Art of Being Human published in Canada last October. Caroline Nazareno, an international Filipino poet also helped her in to weave words.

Since June, when she started seeing a psychiatrist again, Novio started writing, until Aquirelle, where she sent some of her works offered her to publish her works. Although she would not get any royalty as agreed with the publisher, it gave her a break to become known as a poet.

“I asked Sir Ramil first on the offer of Aquirelle. He advised me to go with it. So, it was like a gamble for both the publisher and me. Sir Ramil wrote the foreword and the blurb,” she explains.

Aquirelle released the book online via Lulu.com on varying prices depending on the country. Book sales have been going well in different parts of the globe.

A press release of Aquirelle says “’Maps of Dreams and Memories’ is presently garnering nice sales in US, Canada, Switzerland, Australia, Philippines, UK and Thailand. It’s all her own doing by exuding self-confidence and using her contact channels in various countries. Our contribution was only in publishing the book and marketing it through our own channels, same as we do for all of you who publish with us.”

The book cover was photographed by Jojit Pangilinan with mother and child Lizza and Ximi.

Reward as a Poet

Novio says, she is not expecting to get an award for her poetry. She is happy and at the same time touched by what the people say about her works. One mother, whose child committed suicide, wrote that “(she) captured the last three years of my daughter’s life”. Another reader from the US, Ms. Alma Rivera-Sarmiento, whom she met only on Facebook, wrote that “(she gives) words to my feelings,” after Novio wrote a poem about her deceased husband.

Although her book is only available online at Lulu.com, Novio hopes that she could have a sponsor so it can be marketed in the Philippines where many are asking if it is already available in local bookstores.

“You know, I have to sell the books at a much lower price. But the freight is so expensive. Yet, it is all worth it, having people appreciate my poems.”