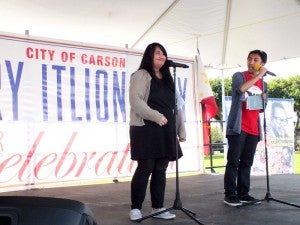 LOS ANGELES—Fiipino American communities in the Los Angeles Area buzzed with a seemingly nonstop celebration of Filipino American History Month as well as Larry Itliong Day as the month ended. 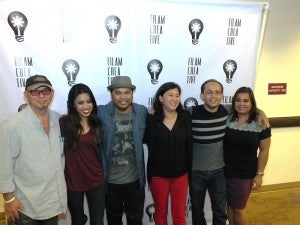 That same morning the City of Carson, held a parade around City Hall to mark Larry Itliong Day and recognized several awardees including, Gerry Villero and David Campbell (labor), Franco Arcebal (leadership), Kobe Paras and Michael Christian Martinez (youth) and Fritz Friedman and Dean Devlin (entertainment) Johnny Itliong, son of Larry Itliong, was also present with his mobile exhibit on his father’s role in the founding of the United Farm Workers Union (UFW).

Also at the Carson Library in the afternoon, Professor Susie Ling of Pasadena City College presented a talk “The Story of Tsinoys: Chinese in the Philippines.”

In Los Angeles, also on October 24, at Unidad Park in Historic Filipinotown, another parade and cultural performances celebrated “Remembering Our Story: Tandaan and Ating Kuwento” all in the shadow of the largest Filipino American history mural, created by artist Eliseo Silva 20 years ago.