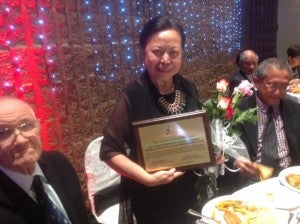 TORONTO, Ontario—The Filipino Centre Toronto (FCT) lauded both beauty and brains, crowning a former schoolmarm as a beauty queen and hailing two Filipino Canadian women for pioneering work in their fields during its annual awards event

Estrellita Aguinaldo, head of the Fiesta Filipina Dance Troupe, earned the reputation of being a leader in showcasing Philippine dance and music for the past 49 years to audiences in Canada and around the globe.

“Tita Estring,” as she is popularly known, graduated from the UP-PGH School of Nursing in 1961 and went on an exchange visitors’ program at Cook County Hospital in Chicago.  There she met and married Onofre “George” Aguinaldo, who helped her create and nourish the fledgling cultural group. 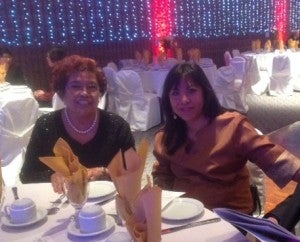 Founded in 1966, Fiesta Filipina has been a major influence in providing Filipino Canadian youth a vehicle for channeling their energies in music and dance.

In honor of her achievements, Estring has garnered numerous awards, among them being one of 20 outstanding Filipinos in the USA and Canada in November 1998, the Ka Bayani Award in February 2005, the Outstanding Asian Canadian Award in May 2005, and the Banaag Award from President Gloria Arroyo in 2004.

The other awardee, Lilian Umale Thompson, Ph.D., is professor emeritus at the Department of Nutritional Sciences, University of Toronto.

Born in Cavinti, Laguna, Lilian graduated from Mapua Institute of Technology in 1960 with a B.Sc. (Chem.).  She received her master’s degree in Agricultural Chemistry-Food Technology from the University of the Philippines in 1964.

In 1969, she earned her Ph.D. at the University of Wisconsin (Madison) major in Food Science and minor in Biochemistry.   She met and married Walter Thompson in Madison.  They have two children, Sylvan and Rina.

Thompson has published more than 225 papers in peer reviewed journals and book chapters.  She has co-edited “Optimizing Women’s Health through Nutrition,” “Food Drug Synergy and Safety” and the first and second editions of “Flaxseed in Human Nutrition.”

She has been invited to present papers in various conferences and symposia and has served in several research granting councils and expert committees. 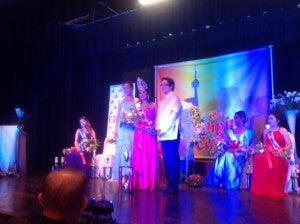 Ms. Paraluman Nancy Sumaya, flanked by Ms. Paraluman 2014 Rizzelyn Catequista and Rafael Fabregas, an FCT director and one of the emcees.

Thompson was a Fulbright fellow and a Scientific Advisory Board Member for Nordforsk (research granting agency that covers all Nordic countries).

Thompson, who has been dubbed the “grande dame of flaxseed (research),” said, “My long term goal is to elucidate the components of plant foods responsible for their health benefits and/or adverse effects and the molecular, cellular, and physiological mechanisms of their action.”

Dr. Thompson has been “internationally recognized… (for her) research on flaxseed, lignans, and breast cancer.”

The University of Toronto has honored her contribution to her field by establishing the Dr. Lillian Thompson Seminar Award in the Faculty of Medicine’s Department of Nutritional Sciences.