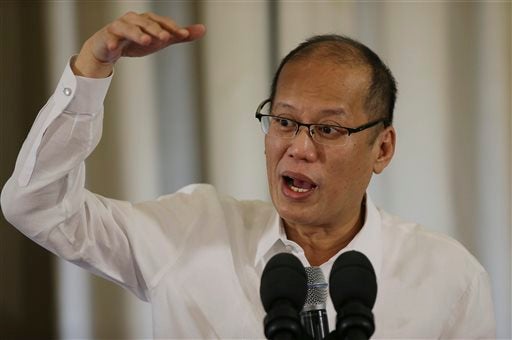 The rule of law has prevailed, and President Benigno Aquino III is “very happy.”

“We are very happy that the [UN Permanent Court of Arbitration] said it has jurisdiction (over the case),” Mr. Aquino told reporters during a visit to Eastern Samar province on Friday.

He was referring to the UN tribunal’s ruling on Thursday that it has jurisdiction to hear the Philippines’ case seeking the invalidation of China’s claim to almost all of the South China Sea, including waters within the West Philippine Sea.

The President also noted that the tribunal is expected to rule on the merits of the Philippines’ petition against China “as early as next year.”

“It’s a fast process. The discussion is quite complicated but we can say, who wouldn’t be happy that and we call the rule of law prevailed?” Mr. Aquino said.

Echoing a Supreme Court associate justice he did not name, the President said the rule of law was the “equalizer” in the relations between a big state and a small state.

Had the UN tribunal ruled that it did not have jurisdiction over Manila’s petition, it would have been “the end of such avenue” for the Philippines, Mr. Aquino said, referring to the legal track that his administration follows in resolving the territorial dispute with China.

Asked how winning the first round would affect the Philippines’ relations with China, Mr. Aquino said the clarifications made by the tribunal would, hopefully, be an “avenue for better relations” between the two countries.

He said the maritime dispute was only one of the aspects of the Philippines’ relations with China.

Before President Aquino spoke Friday, the government’s reaction to the tribunal’s decision was subdued and measured, especially with the upcoming Asia-Pacific Economic Cooperation (Apec) Economic Leaders’ Meeting to be held in Manila on Nov. 18 and 19.

Chinese President Xi Jinping has yet to confirm his attendance at the meeting.

READ: No RSVP yet from China leader

Presidential spokespersons Herminio Coloma Jr. and Abigail Valte said in separate statements that the tribunal’s decision would allow the Philippines to present the merits of the case.

“Our people can be assured that those representing our country have been continuously preparing for this,” Valte said.

“[The] government would really be careful on how to play this up… The Apec should be an opportunity to start mending fences,” Jay Batongbacal, director of the University of the Philippines Institute for Maritime Affairs and Law of the Sea, told the Inquirer by phone.

Batongbacal said the announcement of the tribunal’s decision coming at the heels of the United States’ testing freedom of navigation in the South China Sea, as well as the upcoming Apec summit, was purely coincidental but “not exactly a good mix.”

“China could be taking time to study these things,” Batongbacal said.

President Aquino said the tribunal’s decision would be one of the issues to be tackled at the Association of Southeast Asian Nations (Asean) Summit in Kuala Lumpur next month.

President Aquino has consistently campaigned for the conclusion of a binding code of conduct in the South China Sea between Asean and China.

“The voice that we bring [to the Asean] must have an urgency, that we finish the discussions and we have a code of conduct. That would be part of the interventions we will have at the Asean [summit],” he said.

“It’s a very good development not only for the Philippines but [also] for all nations believing in the Unclos (United Nations Convention on the Law of the Sea). We will closely monitor the developments in this court,” said Peter Paul Galvez, spokesperson for the DND.

He said the DND was optimistic that other nations would adhere to international laws for regional peace and stability.

“As long as we maintain freedom of navigation and [overflight] in the [South China Sea], then that is for the stability of the region,” Galvez said.

Sen. Grace Poe, a presidential candidate in next year’s general elections, hailed the UN tribunal’s ruling, which she said cleared the way for the hearing of the merits of the Philippine case.

“[W]ith this development, which I think the international community will support, I am hopeful that China will respect the ruling and desist from any actions that will negate any decision of the tribunal on the case in the future,” Poe said.

Sen. Antonio Trillanes IV, head of the Senate committee on national defense and security, said the tribunal’s ruling validated the Philippines’ complaint against China and strengthened its call for global intervention.

Trillanes said, however, that he did not believe China would stop intruding into the West Philippine Sea, part of the South China Sea within Manila’s 370-kilometer exclusive economic zone.

“China, for fear of losing face, would likely continue with [its] activities and insist on [its] claims even if it eventually loses the case,” Trillanes said.

Sen. Aquilino Pimentel III said the tribunal’s ruling was good news, but it did not mean the Philippines would win the arguments on the merits of its case.

This is the next challenge for the Philippines, Pimentel said.

Senate President Franklin Drilon said the ruling was a “crucial positive step” in the Philippines’ efforts to protect its sovereignty.

“The Philippines remains committed to the peaceful settlement of conflicting claims in the West Philippine Sea in accordance with international law, in particular the United Nations Convention on the Law of the Sea,” Drilon said.

Speaker Feliciano Belmonte Jr. welcomed the tribunal’s ruling, but said the Philippines should not forsake its relations with China.

“We must remember that this sea conflict is only one aspect and that through many years our country and its people have had very close, fruitful ties with China and we intend to sustain that,” Belmonte said in a statement.

He said the tribunal’s ruling was a “big relief,” clearing the way for the discussion of the merits of the Philippine case.

Batongbacal warned that the tribunal’s ruling could provoke China into becoming more assertive in the South China Sea.

“The realities on the ground have changed and they are not in our favor. Possibly, we won the legal round but on the practical end, we might end up with substantial losses,” Batongbacal said.

He said he was worried about the Aquino administration’s “overreliance on the legal track.”

“Now we could have a hard time with China. We could have developed the diplomatic track to settle the issue amicably. We’ve also lost quite a lot in terms of the strained relations between President Aquino and President Xi Jinping,” Batongbacal said.

He said the timing of the tribunal’s ruling, coming only days after the United States tested freedom of navigation in the South China Sea, “was unfortunate.”

“I am pretty sure these events are not connected but the Chinese might interpret it as the US being behind it (tribunal decision),” Batongbacal said, adding that it could make China more assertive in the South China Sea.

Chester Cabalza, a professor at the National Defense College of the Philippines, agreed.

“Since China’s territorial integrity is now challenged by the United States, definitely they will stringently safeguard their air and naval spaces. China will continuously flex muscle and assert sovereignty over the South China Sea,” said Cabalza, who specializes in Chinese affairs.

“They will finish their constructions and island-building in the South China Sea that would help them secure their strategic interests with or without the tribunal’s decision,” he  said.

Cabalza added that even if the tribunal’s final decision on the merits of the Philippines’ petition would be nonbinding, “China will definitely be pressured by the international community.”

He said the Philippines “must accelerate its position in the Asean to call for a mutually binding code of conduct in the South China Sea because of these new developments.”

Unlike Batongbacal, however, Cabalza believed President Aquino was right in pursuing the legal track.

“Although considered our last resort, notwithstanding our diplomatic and military woes, seeking legal means is the best strategy President Aquino has done,”