No RSVP yet from China leader | Global News

No RSVP yet from China leader 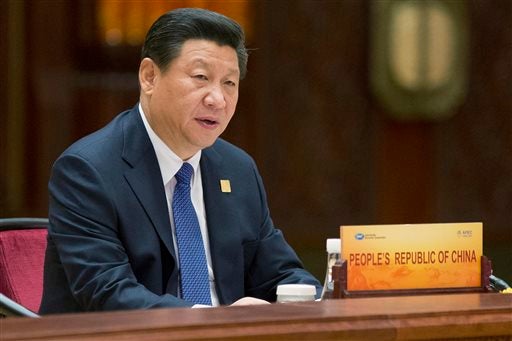 CHINA has yet to confirm the attendance of President Xi Jinping at the Asia-Pacific Economic Cooperation (Apec) leaders summit in Manila next month, but Malacañang is sure it’s not because of the simmering sea dispute with the Philippines.

The Philippines “believes in strengthening its ties with the PROC,” he told the Inquirer.

Coloma, also head of the Presidential Communications Operations Office, reiterated that “the West Philippine Sea issue does not define the totality of our decades-long relationship.”

But, “we affirm that global and regional prosperity will be enhanced by freedom of navigation and peaceful resolution of disputes,” he added.

That is why, he said, it is insisting on a code of conduct for China and other claimant-states to prevent territorial disputes from erupting into armed conflict.

Aside from the Philippines, China is locked in territorial disputes with Vietnam, Malaysia and Brunei, all Association of Southeast Asian Nations members, as well as Taiwan, over islets and reefs in the 3.5-million square kilometer South China Sea, 90 percent of which Beijing is laying claim to.

Ten of the 21 Apec member economies have confirmed their attendance at the Apec economic leaders meeting, or AELM, on Nov. 18 and 19, according to Ambassador Marciano Paynor Jr., director general of the 2015 Apec National Organizing Council.

Paynor said in a media forum on Wednesday that China “has not officially confirmed, but there is no indication that they will not come.”

The United States and Russia, among others, have confirmed their attendance, he told reporters.

Advance security teams from Apec member countries have arrived in the Philippines to check out the various venues of the event, Paynor added.

The Department of Foreign Affairs has said there was no need to send China a special invitation, as no invitations are issued to the annual gathering which all Apec heads of state and government are expected to attend.

Assistant Secretary Charles Jose, also the DFA spokesperson, said “there is no special invitation. It will be the same for all the countries. But we would like to see all the leaders of the Apec economies attend the leaders meeting in Manila.”