‘Never Again’ is not just about Marcos 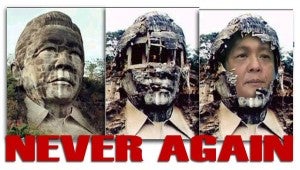 Illustration by artist Edd Aragon who died two weeks ago. According to a friend who shared it on the Never Again page, it was the last illustration Aragon posted on his Facebook wall before he passed away.

Bongbong Marcos’ bid to become vice president turned the spotlight on the slogan many Filipinos embraced after the fall of his late father’s dictatorship: “Never Again.”

Some views on this battle cry have been downbeat.

“We can’t really say #NeverAgain to something that never went away in the first place,” the novelist Clinton Palanca wrote in Spot.PH.

We’ll circle back to these viewpoints later. But first, a reminder: “Never Again” is not a Filipino original. We borrowed it from other nations.

In fact, two weeks after Bongbong’s announcement, news broke on two countries where “Never Again” is an even more powerful battle cry.

Reacting to Israeli Prime Minister Benjamin Netanyahu’s bizarre suggestion that Arab Muslims were, in fact, responsible for the Holocaust, German Chancellor Angela Merkel declared: “We know that responsibility for this crime against humanity is German and very much our own.”

“This is taught in German schools for good reason, it must never be forgotten and I see no reason to change our view of history in any way,” she added.

In Germany, the Philippines and other countries, “Never Again” is about painful histories that must never be forgotten.

In Argentina, the “Nunca Mas” or “Never Again” Report released in 1983 documented the reign of terror of military dictatorship in the 1970s and 1980s.

“Never Again” became popular shortly after Marcos was overthrown in the popular uprising in 1986. The Marcos nightmare has been documented in books and documentaries.

In 1992, a memorial center honoring the victims of the Marcos dictatorship and those who led and joined the fight against the regime opened in Quezon City.

The Bantayog ng Mga Bayani — Monument to the Heroes — features a black granite, called the Wall of Remembrance, where the names of hundreds of heroes and martyrs are inscribed.

“We shall proclaim our firm resolve to keep faith with our martyrs and heroes and our deepest conviction that this land of the morning, the repository of our hopes and dreams, is worth living for and dying for,” Jovito Salonga, one of the prominent leader of the anti-dictatorship struggle and one of Bantayog’s founders, said.

On the Bantayog site, one of the links to the museum’s articles reads: “Never Forget.”

In fact, he wants to go beyond forgetting: Marcos Jr. denies that the reign of terror ever happened.

Which is why his candidacy is both a threat and an opportunity.

I fully endorse the view that we should not blame children for their parent’s crimes. Bongbong has the right to say, “I’m not my father.”

But he’s gone beyond that many times. He has painted the Marcos years as a time of peace, prosperity and happiness, smugly rejects allegations of torture and plunder during the 21 years when his father was in power.

Bongbong Marcos is waging a campaign based on distortions and denial of a dark chapter when one ruler enjoyed absolute power.

If we forget that, it could happen again.

It’s about keeping alive the most important lesson of the Marcos regime: That we should not readily believe individuals or political forces seeking absolute power, arguing that only they have the answers to the country’s problems.

Which brings us back to Palanca’s argument that #NeverAgain refers to a family, a problem, a curse that never went away.

That’s not really true. Yes, The roots of the problem, the system that made it possible for a Marcos to grab power and abuse it for two decades, are still there.

But something despicable did go away, something awful did end when Marcos fell: fascist rule.

This is a point we need to stress, especially to young Filipinos: Marcos enjoyed absolute power. He and his allies could do anything during the regime.

And we ended that. We defeated a fascist ruler. We ended a system in which one man and his cohort could get away with murder and plunder.

It’s true that corruption, political abuse and poverty did not end with the fall of Marcos.

But there’s one thing we’ve never had to endure since the dictator was ousted: We never had to deal with a leader who held on to power for more than 20 years and who assumed he could stay in power forever.

We’ve never had to deal with a president who rigged one election after another, who shut down newspapers and TV stations simply because he didn’t like what they were saying about him, who arbitrarily threw critics of his regime in prison and who was so full of himself he had a giant bust of himself built on a major highway.

We defeated a tyrant and a bully and we need to defend that victory. We need to hold that line.

Otherwise it could happen again.

Oscar Franklin Tan called “Never Again” incomplete, saying, “it builds nothing and leaves revisionism and disenchantment to fill the void.” Hard to argue with that, despite the efforts of such organizations as Bantayog ng Mga Bayani, not enough has been done to explain what Marcos did to the country, especially to the youth.

“And it is our fault; we are to blame,” Palanca wrote. “The fault is ours for not telling the story of the nightmares of dictatorship as thoroughly as we should have.”

But as I said, Bongbong’s “my-father’s-murderous-reign-didn’t-really- happen” campaign is also an opportunity.

The phrase “Martial Law” trended on Twitter the week he announced his candidacy. Membership in the Never Again site on Facebook has risen sharply,

In social media and beyond, Marcos Jr.’s bid for power has turned the spotlight on the way Marcos Sr. abused his power.

Instead of forgetting, Filipinos are remembering why we still need to say, “Never Again.”