Laugh, learn with Tenorio’s ‘Monstress’ on stage in San Francisco 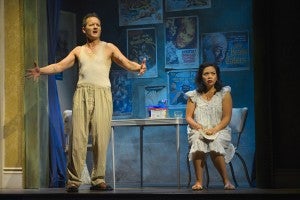 SAN FRANCISCO–On its world premiere run at the Strand Theater in San Francisco, “Monstress” is an impressive and moving experience, comprising two one-act plays adapted from a book of short stories of the same title by Lysley Tenorio.

The two-play production by the American Conservatory Theatre (A.C.T.) is directed by Carey Perloff and adapted for the stage by Philip Kan Gotanda (“Remember the I-Hotel”) and Sean San Jose (“Presenting…The Monstress!”)

Tenorio’s book of eight tightly structured and captivating stories, with fascinating characters, reflect the Filipino and Filipino American experience. Most of the stories “are based on strange-but-true historical events or places that exemplify the clash-and-meld of the Philippines and America,” according to Tenorio.

His book, he says, “is concerned with the strange, with the bizarre, particularly in these unexpected intersections. The strange-but-true element is essential for me as a writer. It’s a way into drama, of keeping myself, and hopefully the reader, entertained while at the same time emotionally invested.” 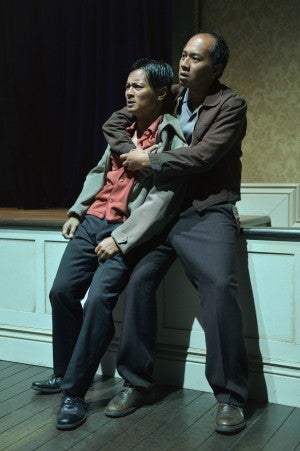 “Remember the I-Hotel” is about the relationship between two Filipino men who immigrated to the United States in the 1930’in pursuit of a better life. After working in the fields of California, picking fruits and vegetables, Fortunado “Nado” Giron, played with depth and sensitivity by Jomar Tagatac, ventures to San Francisco to try his luck in the city. He finds himself on Kearny Street, the site of Manilatown, home to many Filipinos and Filipino-owned businesses, and meets Vicente Pacram, brought to life with intensity by Ogie Zulueta.

Vicente introduces Nado to the city, and eventually to the I-Hotel, a place that they would call home for decades. Their friendship grows through their shared experiences of happiness, sorrow, discrimination, love and tragedy, ending as Manongs faced eviction in 1977.

Staged in an empty proscenium that magically transforms into a dancehall, a hotel lobby, the Embarcadero, a hotel room and other scenes, it has a cinematic quality, where a scene, through the use of theatrical elements, would seamlessly “dissolve” onto the next with the actors utilizing the space through the use of props and movement. 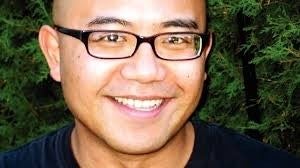 “Once I hit upon the idea of using live music to thread the scenes, and to set the whole thing in a Filipino dance hall or social club, the form of the plays became clear in my mind,” director Perloff says. “Visually I knew they’d have to be very choreographed, very alive physically, so as not to feel like “prose on stage”.

“Presenting…The Monstress!” is a humorous take on the pursuit of the American Dream through filmmaking. Engaged in the trade of make-believe, B-movie filmmaker Checkers Rosario, humorously played with distressed machismo by Sean San Jose, wallows in the wake of his faded glory after he was fired, along with actress and girlfriend Reva Gogo, determined, strong yet loving as channeled by Melody Butiu. 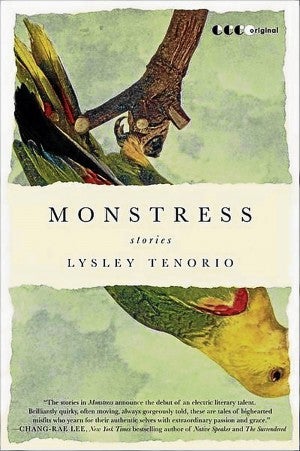 A random visit from Gaz Gazman, a filmmaker, potrayed with comedic madness by Nick Gabriel, who is allegedly from Hollywood, changes their lives. Soon they find themselves on their way to California, where they believe dreams are made real, only to discover that things are not what they thought they would be.

Arguably an allegory with neocolonial implications on the strong influence that America has on the Philippines and the rest of the world through movies and other forms of entertainment, “Presenting…The Monstress!” strips away lies through its character’s journey in an imaginary landscape.

To speak nothing of the outstanding acting by the cast, “Monstress” is elucidating trip. And to Tenorio, it has not only been an “amazing adventure,” but also “an incredible honor.”

“Carey Perloff, the artistic director of A.C.T., and Philip Kan Gotanda and Sean San Jose, who adapted the stories, are brilliant, and performed a true act of alchemy,” says Tenorio.

“They didn’t just transcribe or translate my work for the stage. They transformed it and created an experience that manages to mix the humorous with the sad, the whimsical with the poignant. There’s sorrow and joy in the show they’ve put together, and to me, that’s what good storytelling should encompass—in this way, it’s like real life.”