PH envoy to U.S. calls ties a ‘partnership of equals’ 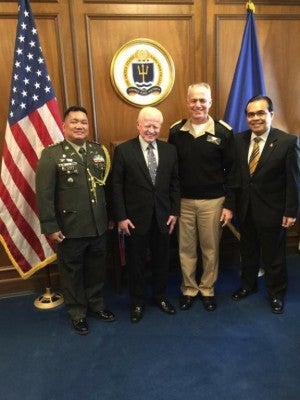 WASHINGTON, D.C.—As the United States stamps its naval presence in the South China Sea as a warning against China’s “island-building” in territory claimed by the Philippines, the Philippine ambassador insisted that the U.S.-Philippines relationship is “a partnership of equals.”

“While many people still look at the bilateral relations [between the Philippines and the United States] through the prism of our earlier colonial history, I firmly believe our partnership has evolved into one of equals, bound not just by our shared history but a mutuality of interests,” Ambassador Jose L. Cuisia, Jr. told students and faculty of the U.S. Naval War College in Newport, Rhode Island on October 26.

The Philippines’ top envoy to the U.S. explained the different facets of the long-standing bilateral relationship, underscoring challenges and opportunities in the political-security and economic fields.

“Over 60 years after concluding the Mutual Defense Treaty, the Asia Pacific region has emerged as a region with the most robust economic growth and the most complex of security challenges. The Philippines and the US can and should continue to work together to seize opportunities and address the challenges,” Cuisia said.

He also cited the “overwhelming and timely” action of the U.S. military in the search, rescue and relief operations in the aftermath of super typhoon Haiyan in November 2013. The U.S. deployed more than 50 aircraft and ships and over 1,000 marines and soldiers to help transport relief supplies and to evacuate over 21,000 people. This was in addition to assistance from USAID and the U.S. private sector. The total estimated value of aid from the U.S. government and American citizens stood at around $146 million.

Cuisia stated that the Enhanced Defense Cooperation Agreement (EDCA) is meant to solidify cooperation in humanitarian assistance and disaster response, as well as help upgrade the capabilities of the Armed Forces of the Philippines and develop the Philippines’ “maritime security and domain awareness.”

Cuisia expressed optimism on the Philippines’ arbitration case against China in the South China Sea dispute. “Many have asked me what will happen if China does not abide by the decision of the Tribunal. I believe and maintain that by resorting to a recognized body under UNCLOS, whatever the outcome and whatever the action by the other party, judgments will create a political reality that is almost impossible to ignore. Having an impartial third party rule on a case holds weight because one side will have the backing of international law.”

Cuisia credited the US’ inclusion of the Philippines in the Partnership for Growth and the Millennium Challenge Corporation initiatives for helping the country attain economic growth and development.

He also noted that while the Philippines enjoys a trade surplus with the US, “we believe that there is room for more trade that will bring jobs to both our peoples and expand prosperity.” 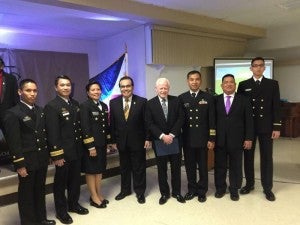 The ambassador also reiterated the Philippines’ commitment to join the Trans-Pacific Partnership (TPP), in pursuit of its “ambitions to become part of these high-caliber trade networks, or as some have put it the ‘big league’ of international trading partners.”

He likewise joined members of the Filipino-American community for a “Philippine Night” and engaged Filipino students currently training at Hyatt Regency Newport. He was accompanied by Philippine Consul General Mario L. De Leon, Jr. and Col. Orlando M. Suarez of the Defense and Armed Forces Affairs Office of the Philippine Embassy in Washington, D.C.

The U.S. Naval War College is the Staff College and “Home for Thought” of the United States Navy. Rear Admiral Philip Gardner Howe III is the first Navy SEAL officer to serve as president of the college.

Vice Admiral Mateo Mayuga, Rear Admiral Alexander Pama and Vice Admiral Jesus Millan are some of the notable Philippine Navy’s Flag Officers in command who received further training and education from the US Naval War College.

The Philippines and the United States will mark the 70th anniversary of the establishment of their diplomatic relations next year.

Repatriation of Filipinos in cruise ship sought after quarantine period