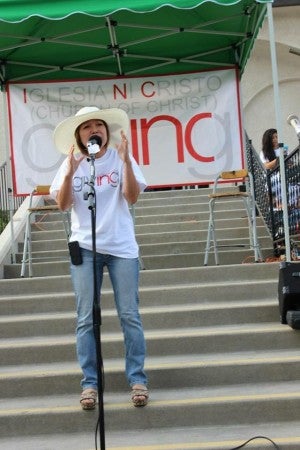 OAKLAND, California—Harassment charges leveled by Iglesia Ni Cristo (INC or Church of Christ) officials in the U.S. against an expelled member and her husband were recently thrown out of court, but the couple said they were not contemplating filing counter charges at the moment.

The petition of the INC through Anaheim local minister Virginio Ramiro was denied by Superior Court of Orange County in Fullerton Judge Beatriz Gordon last October 16 because the actions committed last September 12 by the couple, Liezl and Julius Deocampo, did not rise to the level of harassment under California code.

In a statement, lawyer for INC main office Atty. Rommel San Pedro claimed, ”The court ruled that the actions of Liezl and Julius Deocampo did not meet the requirements of ‘civil harassment.’ Though we strongly disagree with the court’s decision, we also respect the rule of law.”

“They filed a harassment case with a petition for a temporary restraining order (TRO) against us,” she added. “We, however, have no intention of filing a counter-harassment charge as we are not after revenge and continue to pray for guidance on our next moves depending on the future actions they may take against us.” 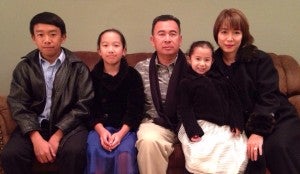 The Deocampo family: Liezl, Julius and their children. CONTRIBUTED PHOTO

Liezl and her husband, Julius, were expelled on September 4, for “conduct unbecoming a Christian” after she was suspected of rallying people against the alleged corruption of the church and of encouraging people not to give offerings. She denied both charges, which she said, were never proved.

Asked why the Deocampos were expelled, INC Atty. San Pedro replied that “expulsion is an internal ecclesiastical matter” and a request for information may be made through the church’s Central Administration.

Despite being expelled, the Deocampos went to the Anaheim INC local on September 12, to worship believing they could still do so. But later, the local church reminded them that they were not supposed to come into the church.

“We went to church, had the head deacon stop us at the start but were nevertheless not prevented to worship, had a peaceful service that felt nice after we were expelled for a few weeks,” recounted Liezl.

“But when we went outside, a small argument ensued after Attty. San Pedro approached my husband and told him that we were not supposed to be here and we were trespassing after which we were reported to the police who were just across the street,” she added.

San Pedro reiterated at this point that expelled members have lost their right to worship in any of the church properties, even if they want to worship in silence, unless they get explicit authorization from the INC Central Administration.

An agreement was supposedly reached between the police and the INC leadership that the INC can call the police on the Deocampos for trespassing if the family came back to Anaheim chapel after officially being given a warning.

The Deocampos claimed they then heeded police advice and never went back to the Anaheim chapel.

“We were surprised later on when they served us the September 16, 2015 restraining order petition filed by the minister Virginio Ramiro for harassment. They made it appear that we were the ones who did the harassment when we had little contact with him that day as he was not even there to preach. He just came to the place of the incident after the worship service,” Liezl explained. 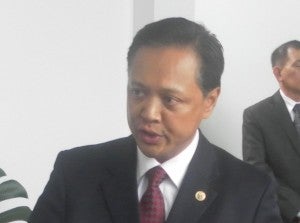 San Pedro, however, claimed that when he confronted Julius Deocampo on the day that they were allegedly caught trespassing, Julius said, “See you next week.”

“To a reasonable person, that implies that he and his wife will attempt to trespass again on our property,” San Pedro maintained. “Also, Julius stated that he was the one who called the Anaheim Fire Department on us for alleged code violations. To do so during our worship service is very hurtful and disrespectful. No violations were found.”

Liezl stressed that they were still active members when Julius called on the fire department to make sure that the congregation was safe especially when the church was full of people. Judge Gordon also reportedly did not find Julius’ statement as threatening, violent or a harassing.

Ruby Suarez, a member of the INC Defenders organization, said the group was happy with the decision of the judge as they really had no doubt that it was another bad move of the church administration.

“We kinda knew that the decision was going to favor us because the witnesses interrogated by their lawyers in the courtroom were even contradicting each other. And so when the decision was given, I just bowed my head, was quiet and thankful,” Liezl said.

“Deep inside I was sad for the minister who was used by the higher officials of the Church of Christ that nowadays do not listen to reason anymore. I was happy the judge handed down a very wise and fair judgment, but I felt for our minister who we still love. We still love our ministers but they are not guided accordingly right now,” she added.

She reiterated that their family still loves the church, but they will stay away in the meantime as they would not want to cause any commotion or any disruption in the services.

This position sat well with San Pedro as he reiterated that no expelled members would be allowed to attend worship services at any INC place of worship even with the Gordon decision.

“If you notice our complaint, it was for ‘civil harassment.’ The decision of the judge has no bearing on our property rights nor on the issue of trespass. Liezl and Julius Deocampo have no legal right to step foot on any of our Church properties. If they attempt to do so, we will call the local authorities and have them arrested for trespass,” San Pedro emphasized. 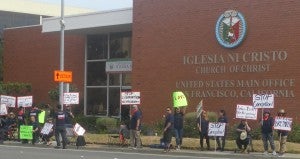 A rally staged recently in front of the Iglesia Ni Cristo U.S. main office in Burlingame, California, asked for church reforms and a stop to alleged violation of human rights against Ka Erdy Manalo’s family members, among others. PHOTO BY JUN NUCUM

““We simply want to worship in peace. We want to feel safe whenever we hold our worship services. If there is anyone who attempts to destroy that peace, be it an expelled member of the Church or any individual or group, we will exhaust any and all legal means to defend our right to continue to worship in peace,” he said further.

On the other side, Suarez also believes that the judgment makes them feel that God is on their side and are grateful to be in the U.S. where bullying tactics are not going to work in suppressing the truth.