Suspects in shooting of Chinese envoys now under police custody 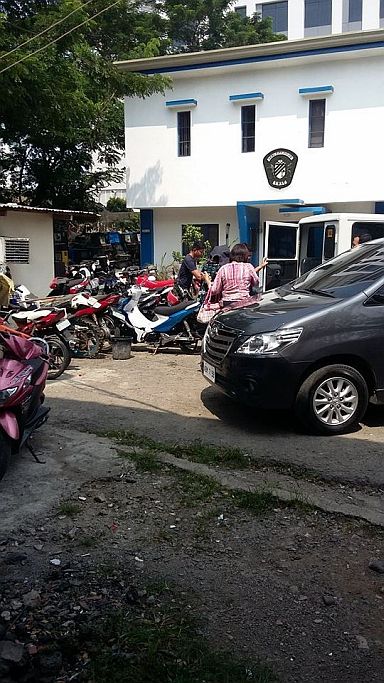 Gou Jing, one of the suspects in the shooting of Chinese diplomats in Cebu, was escorted to a waiting van outside the Cebu City Intelligence Branch. CEBU DAILY NEWS PHOTO

CEBU CITY– The Chinese couple implicated in the killing of two diplomats and wounding of another have been transferred to the Police Regional Office in Central Visayas (PRO-7) apparently in preparation for their release from police custody.

Jing was first to leave the CPPO about 1 p.m. on Friday. Her head was covered with a jacket while she was escorted by a female officer when she boarded a van owned by the city government.

Liang, who also had his head covered with a jacket and escorted by policemen in civilian clothes, was next to leave CCPO on board a police car.

Both suspects were still wearing the same clothes they wore when taken into police custody on Wednesday shortly after the shooting inside the function room of Lighthouse Restaurant along General Maxilom Avenue in Cebu City.

The convoy of at least four vehicles and two motorcycles left CCPO about 1 p.m. and made it to PRO-7 headquarters in about 10 minutes.

Two motorcycle-riding Swat personnel led the convoy. The van and the police car boarded by Gou and Li were in the middle of the convoy.

Cebu City Mayor Michael Rama said he is directing the city police to follow due process in dealing with the suspects.

He explained that since the crime happened in Cebu City, the couple are subject under local laws.

Rama said he wants police to blotter the incident, arrest the suspects, file cases, and let the suspects present their documents to claim they have immunity.

The mayor said he talked with Cebu Gov. Hilario Davide III and provincial administrator Mark Tolentino regarding his stand and they agreed.

Rama said that as mayor he has operational supervision and control over the city’s police and they should follow his orders.

For his part, Vice Mayor Edgardo Labella, who heads City Hall’s Police Coordinating and Advisory Council (PCAC), also said the suspects should be detained and be subjected to inquest proceedings since they were caught “in flagrante.”

A Cebu City hall source said that a top Chinese official is now in Cebu while about 25 Beijing policemen are expected to arrive to escort the return of the two bodies and the two suspects back to China.