Forbes to Aquino: US needs you 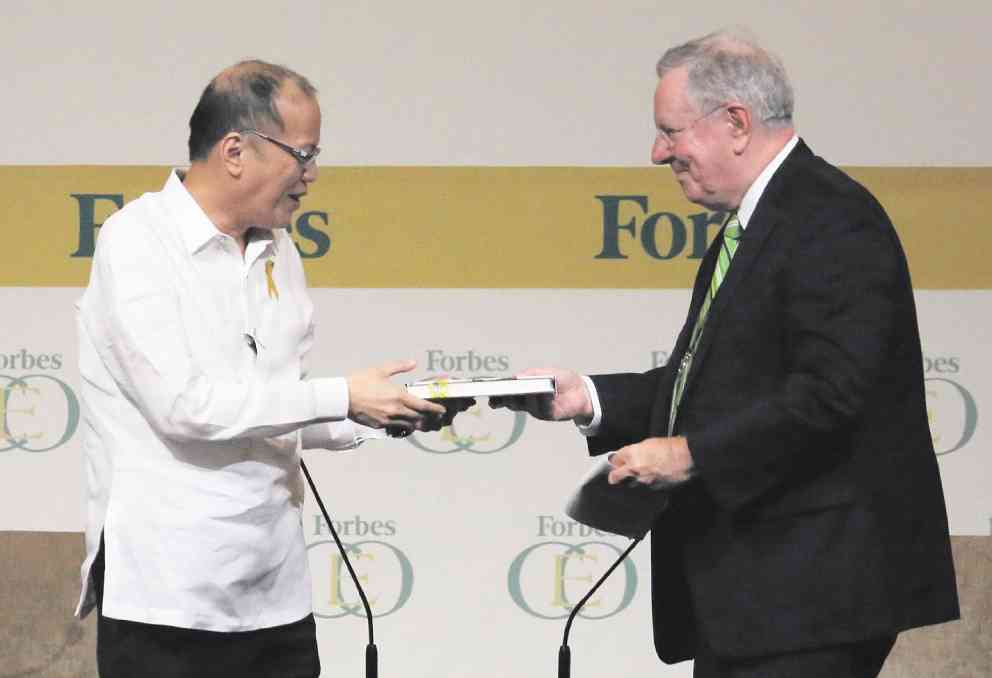 GOOD READ Steve Forbes, chair and editor in chief of Forbes Media, presents President Aquino with a copy of a book he has written after the Forbes Global CEO Conference on Wednesday. RAFFY LERMA

THREE times in their 30-minute dialogue, Steve Forbes, chair and editor in chief of Forbes Magazine, told President Aquino he could improve the economy of the United States, eliciting laughter from the audience comprised mainly of the world’s top business leaders.

“I think people who hadn’t been here for a while are very surprised at the dynamism of the economy and we were discussing beforehand that when we get back, our party, to the United States, some of us are going to get a constitutional amendment so that President Aquino, when he leaves office next year, can come to the US and give us some of the 6-percent growth rate,” Forbes said Wednesday as soon as he and the President settled in their seats onstage.

Mr. Aquino chuckled and looked a bit bashful, as he replied: “So kind, sir.”

Forbes was a one-time US presidential aspirant himself.

His one-on-one interview with Mr. Aquino, called “A Meeting of Minds,” closed the three-day Forbes Global CEO Conference at the swanky Solaire Hotel, participated in by some 400 of the world’s most prominent business leaders.

It was the first time that the prestigious gathering was held in Manila. Previous conference venues include Singapore, Hong Kong, Dubai, Kuala Lumpur, Sydney, Shanghai and Bali.

The President and Forbes discussed the country’s economy and global economic issues, with Mr. Aquino mostly highlighting his administration’s gains and giving a positive assessment of his six years in office.

As of Wednesday, Mr.  Aquino said he had exactly “259 and a half days” left in office.

Asked by Forbes how he was able to keep the peso stable at a time of currency turbulence, the President said that among other things, his administration was “prudent” in taking out loans. He wanted to ensure that every loan would have a concrete output.

“I am very conservative in terms of handling the people’s funds,” Mr. Aquino said.

Forbes quipped: “That’s why we need you in Washington.”

The President took pride in the foreign direct investments in the country that saw a “600-percent growth” since 2010 and in the private-public partnership contracts that contributed to the development of sectors such as power, infrastructure, communication and transportation.

The last two sectors, he noted, did not just help improve the economy but also contributed to disaster risk reduction.

Mr. Aquino said that it had become easier to start a business in the Philippines, as the whole process could be completed in 30 minutes, in response to the concerns raised by the different chambers of commerce.

The President emphasized that the reforms in education that his administration spearheaded was a “holistic approach” aimed at preparing Filipinos for the opportunities available to them.

But as he was wont to do, he criticized the Philippine media and compared them with those in other countries for wanting “to have something that is sensational,” particularly when it came to security concerns.

“We admit, we have problems, but I don’t think our problems are disproportionate to any other country of our size and our particular status,” the President said.

He said that the recent kidnappings had taken place in the southern part of the country, where the government had been trying to forge a peace agreement with a major secessionist group.

The President remained hopeful that the proposed Bangsamoro Basic Law would still be passed by Congress to pave the way for peace and development in Central Mindanao.

Mr. Aquino also acknowledged that among the “threats” security forces continued to address were drug cartels and identity theft, but government was addressing these.

He said his administration had shown that officials were made to account for his or her actions.

The Ombudsman, for example, “has actually gone after a lot more of those who were previously considered sacrosanct and invulnerable to being made to account for their actions,” Mr. Aquino said.

The President, however, added that the “key to success” in cleaning up the government was more than just the filing of cases—the conviction of the accused.

Asked by Forbes what he was most proud of in his nearly six years as President, Mr. Aquino repeated what he often said—seeing the “renewed outlook and optimism” among the people.

In fact, he said, while the figures were debatable, there was a “sizeable number” of overseas Filipino workers, who have returned to the country for good.

“We think that what we achieved currently is just a stepping-stone toward what can be achieved by the next administration because they will be starting at a better situation than what we had when we started,” the President said.

Forbes rounded up the interview by saying: “Believing in the future, that’s something what the rest of the world needs, which is why we hope after you leave office, you will come to the US and give us some of that belief in the future. Mr. President, thank you very much.”