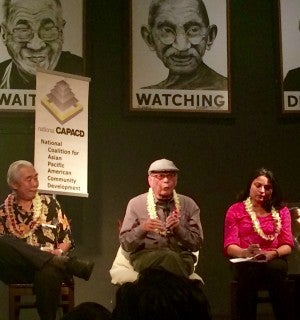 WASHINGTON, D.C. — In the civil rights and antiwar movements in the ‘60s and ‘70s a political alliance among several ethnic groups emerged in Seattle, Washington, to fight for equal rights. This alliance and friendship was best exemplified by the relationship among four activists of different backgrounds: “Uncle Bob” Santos, a Filipino American; Bernie Whitebear, an American Indian; Larry Gossett, an African American; and Roberto Maestas, a Mexican American.

A new book by Bob Santos and co-author Gary Iwamoto entitled Gang of Four, the collective nickname of the four civil rights leaders, tells their story of decades of working together to protect affordable housing, ensure that elderly and low-income families were provided with social services and to help improve life in Seattle as a whole.

Gang of Four reads both like a biography and a tale told by your grandparents. It begins with narrating the early childhood of the four men, who all have common origin stories of struggling with racial perceptions. At a young age, they observed being treated differently because of how they looked. The book tells of how they met and supported each other throughout the years. 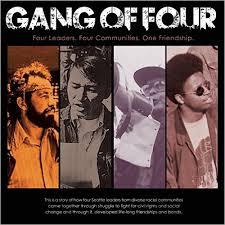 During a book talk and signing in Washington, D.C., in late September, Santos reflected on his time as a Gang of Four member.

“We were all fighting for the same pot of money … We had goals and knew we had to fight for resources,” Santos says. The group realized they were working for similar goals and shouldn’t have to compete for the funds.

They began attending public hearings for program funding as a unified group to show that all minority communities mattered and shouldn’t be pitted against each other.

The Gang of Four, also known as the “Four Amigos,” became prominent on the political scene, and over time everyone, even politicians, wanted their endorsement due to their influence.

The book illustrates the energy and passion of the Gang of Four in their efforts to make positive changes in their communities.

“I never looked at negative side of issues; (I) just thought of ways to get even,” Santos says. “The government (functionaries sometimes) don’t do their homework. You have to get even to make sure they take care of the community.”

Santos’ memories that have remained vivid even later in life include his time serving as northwest regional director for the Department of Housing and Urban Development between 1994 and 2001. During his time, he helped use a federal building as a homeless shelter.

He added that his work in Seattle can be used as a model for activism and cross-racial coalition building; but youth today, of course, have different issues. 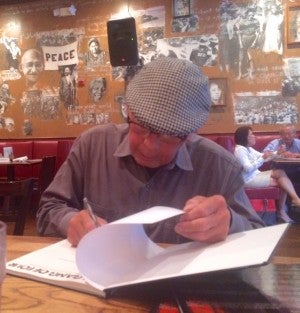 BOB SANTOS signs a copy of his book Gang of Four on September 29, in Washington, D.C. PHOTO BY MARY TABLANTE

Some of the problems youth face with coalition building, Santos says, is they don’t necessarily have common goals and it can be difficult to get older folks to understand their concerns.

“We’re getting a lot more interest from young Asian Americans who think we gloss over issues important to young people,” he said, adding that older generations should take more time to listen to youth.

Today, Santos has 19 grandchildren and 14 great-grandchildren, but he’s known to all of them as Uncle Bob. Santos and Larry Gossett are the surviving Gang of Four members, making this book even more significant in preserving the friends’ stories.

Gang of Four is available from Chin Music Press. According to its website, Chin Music Press is offering free shipping in the U.S. for this title for a limited time. All the books shipped through its store will be signed by Bob Santos.