Justice Carpio to speak in Washington on China’s sea claim 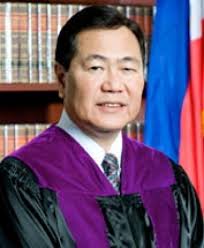 WASHINGTON, D.C. – Senior Associate Justice of the Philippine Supreme Court Antonio T. Carpio will deliver a lecture on China’s claim in the disputed parts of the South China Sea/West Philippine Sea on Monday, October 5 at 2:00 to 4:00 p.m. at the Center for Strategic and International Studies 1616 Rhode Island Avenue, NW.

The CSIS Sumitro Chair for Southeast Asia Studies Banyan Tree Leadership Forum will host Carpio, who will speak on China’s nine-dash line claim as the root cause of the South China Sea disputes and show how it encroaches on the maritime zones of other coastal states.

Carpio will argue that the recent creation by China of artificial islands in the Spratlys is part of a design to control the South China Sea for economic and military purposes.

The lecture will explain how the nine-dash line claim and the activities by China to enforce it, violate the United Nations Convention on the Law of the Sea (UNCLOS) and threaten peace, security, and stability in the region. It will argue that the nine-dash line claim has no historical basis and that throughout Chinese history the southernmost territory of China has been Hainan Island.

Carpio will suggest a possible resolution of the dispute whereby China would return to the original intent of the 1947 nine-dash line, articulated by President Ma Ying-Jeou of Taiwan, as a claim to islands and their maritime zones that are recognized under international law.

Justice Carpio was sworn in as a member of the Supreme Court of the Philippines on October 26, 2001. Click here to register for the event.
Like us on Facebook