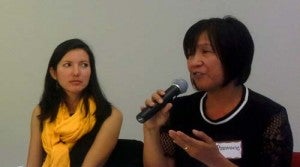 OAKLAND, California — Rosemarie Varona and her husband visited an auto dealership in 2009 and decided to take out a loan to purchase a car.

“We were so happy. I came here 20 years ago and this was my first new car,” says Verona, who is originally from the Philippines.

The couple negotiated with the dealership to finance the car through their own bank, Patelco, but the dealership did not follow through. “It was all lies,” says Varona. “I even received a letter from Patelco saying that they never received an application.”

Instead, the dealership attempted to finance the car through a different company at a higher interest rate.

Varona shared her story with a group of Bay Area ethnic media journalists and community organizers at a press event organized by New America Media for Housing and Economic Rights Advocates (HERA).

HERA, a California non-profit legal services organization, provides free financial and legal counseling to California residents who have been subjected to predatory lending, can’t access affordable credit, or are dealing with homeowner problems such as foreclosures or poorly regulated homeowner’s associations that have the power to go after delinquent members.

“Why lawyers? The debt collection system in our country is not very functional,” says Maeve Elise Brown, co-founder and executive director of HERA.

“The same debt can get sold and resold multiple times to different entities until you don’t know the name of the person who’s collecting money from you, you don’t recognize the dollar amount, it’s all different from what you originally knew,” Brown explains.

Brown states that most consumers are unaware of the federal and state laws that protect them from predatory lending and other forms of financial abuse, and that HERA’s role is to spot and address violations of those laws.

HERA attorney Megumi Tsutsui describes the cases of two clients who applied for loans at check cashing stores to deal with emergency expenses.

“They were monolingual Spanish speakers,” Tsutsui says, “but they were given a contract in English telling them how much it would cost to take out this loan. They were never told in their language how much it would cost them. [One was] charged 80 percent interest, which was $1,750, to take out a $2,500 loan. The other person was charged a 180 percent interest rate, so it cost him $6,800 to take out a $2,500 loan.”

This type of lending is illegal under the California Civil Code 1632, which stipulates that the terms of a contract must be provided to the borrower in a language they can understand. California’s most common languages–Spanish, Korean, Chinese, Tagalog, and Vietnamese–are protected under the code.

Like Varona, many of HERA’s clients are immigrants who have negative items on their credit reports or sometimes no credit history at all.

“What a lot of people don’t realize when they’re coming to this country is that a large part of this economy is built on credit scores and credit history,” Tsutsui says. “If you don’t have a credit history or you have a bad credit score, it could impact what the cost of credit is to you and what interest rate people charge you.”

In the Bay Area, credit scores are also having a growing impact on whether people can access affordable housing. HERA clients have been denied affordable housing due to credit history, unpaid collections, or too much existing debt, such as large student loans.

“Student debt is very difficult to get rid of,” says senior attorney Noah Zinner. “If you fall behind on a credit card, you have options; there are limits to what they can do to come after you.”

Federal student loan debt is unique, Zinner explains, because tax returns and even public benefits are not protected from collectors.

Zinner says that HERA has been heavily involved in advocacy to reform federal student loan debt discharge rules. Right now, he considers the best-case scenario for most borrowers to be a payment schedule of 15 percent of the student’s discretionary income for 25 years. He notes that many clients find this prospect dismaying.

“The things that everybody needs in order to move ahead,” says Zinner, “like housing, education, a car if you need to get to work [are] becoming inaccessible to people, or accessible at such a cost that you’re basically becoming a servant to your own debt.

“Although there seems to be wealth growing in the Bay Area, it’s very much a superficial wealth [that’s] only accessible to a very few.”

This report is part of a project to educate consumers about financial abuse in partnership with Housing and Economic Rights Advocates (HERA). For more information, go to www.heraca.org.