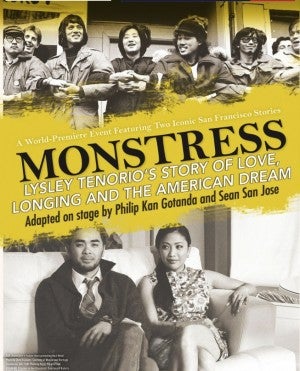 SAN FRANCISCO — We hear about Filipinos pursuing the American dream all the time and although a number believe that they have achieved it, some still continue to tread the unknown in a land so different from their own.

Giving a fictional tale about this is “Monstress,” two world-premiere one-act plays about love, longing and the American dream.  Going onstage at the American Conservatory Theater’s (ACT) Strand Theater, “Monstress” is based on the short stories by Lysley Tenorio and is adapted for the stage by Bay Area playwrights Philip Kan Gotanda and Sean San Jose.

Tenorio shared that he wrote the book because of his interest in surprising historical-cultural intersections.  “They surprising, unexpected, at times bizarre,” he said and then added, “and they make for compelling stories.” He also said that although he is a Filipino immigrant, the stories in “Monstress” are not autobiographical.  Nevertheless, he feels that they resonate with his emotions.

The idea of putting “Monstress” onstage happened when Carey Perloff, ACT artistic director contacted him after the book came out.  Perloff, who is also the director of the play, then said that she was interested in adapting the stories.

“As soon as I came across Lysley Tenorio’s magical collection of stories called “Monstress,” I wondered if there was a play hidden inside…or several plays,” said Perloff in a statement.  “Tenorio’s tender and complex look at Filipino American life in the Bay Area has so much resonance for us at ACT as we open a new theater adjacent to one of the biggest hubs of Filipino culture.”

Playwrights Philip Kan Gotanda and Sean San Jose then chose their favorite stories from the book to come up with a riveting script.

“Sean San José and Philip Gotanda have already done a remarkable job transforming these stories for the stage, infusing them with a new energy which, at the same time, honors the stories themselves,” said Tenorio.

In these two tales of contemporary Fil-Am life in the Bay Area, a vibrant array of characters strive for personal transformations that are seemingly impossible, wonderfully moving and distinctly theatrical.

The infamous headline-making eviction of Filipino residents from San Francisco’s International Hotel in the 1970s sets the background for Gotanda’s stirring “Remember the I-Hotel.”  The story illuminates the dangers of love that crosses forbidden territories.

San Jose’s retelling of the title story “Monstress” moves us from the streets of Manila to the Bay Area, where a B-movie director has been seduced by the opportunity to work with a shady American filmmaker.  An evening of song and story about love and family, hope and indifference, triumph and failure, “Monstress” explores the resilience of a community struggling to find a home in the ever-shifting sands of the American dream.

The stories and characters of “Monstress” may be slightly odd to some, but Tenorio shared that it’s up to the audience how to interpret it.  He does, however, hope that this production will remind people of the thriving Filipino and Fil-Am communities.  “Full of energy and life, and that they’ve contributed to the culture—their stories deserve to be told in the mainstream, and I’m so grateful that ACT is recognizing that.”

He also said whatever the American dream is—it’s a complicated one.  “Full of gains, losses, victories and defeats, joy and heartbreak.  It’s life.  If there’s any kind of truth, I hope these plays convey that.  So I hope everyone will come out and see “Monstress”—it’s a wonderful show.”

ACT’s production of “Monstress” is made possible by Executive Producers Doug Tilden and Teresa Keller; Jack and Susy Wadsworth and Producers Jerome L. and Thao N. Dodson; Dr. Gideon and Cheryl Sorokin.  Special support provided by the National Endowment for the Arts.

In association with “Monstress”, ACT will offer numerous InterACT events —many of which are presented free of charge—that will give patrons opportunities to get closer to the action while having an entire night out at the theater.  Visit act-sf.org/interact to learn more about subscribing to these events throughout the season. (Published in SF Magazine) *Special thanks to Kevin Kopjak, Charles Zukow Associates.

Read Next
Immigrants unaware of U.S. protections against financial abuse
EDITORS' PICK
DOH: Too early to say COVID-19 cases are declining
The best of bayside and city living at SMDC’s Sail Residences
COVID-19 cases in City of Manila are decreasing, says OCTA
Gov’t rolls out COVID-19 vaccination in select pharmacies on Jan. 20 to 21
Acer starts the year off strong with the Aspire Vero National Geographic Edition
Over 3 Million worth of prizes to be won at Smart Padala’s SENDali Manalo Promo!
MOST READ
Comelec junks petition to scrap Bongbong Marcos COC
In Batanes, octogenarian dies of COVID-19
Marcos Jr. visits Cebu, stands as ‘ninong’ to mayor’s son
When to get boosters after positive COVID test
Don't miss out on the latest news and information.