OAKLAND, California – A new cluster added to the five in President Benigno Aquino III’s cabinet is one that no other administration had considered before, the cluster on environmental protection.

It is headed by former Congressman and now Presidential adviser on environmental protection J.R. Nereus Acosta, who recently held a consultation session in the Oakland, California, offices of the Global Footprint Network (GFN).

Acosta explained at length the work of his cluster in the cabinet. The environmental protection cluster, he said, is in its “infancy.” The other cabinet clusters are on defense and security, law and justice, poverty reduction and social welfare, human development and education, economy and finance.

Acosta is expected to navigate various agencies of government to conduct a policy review for the president, especially on the laws that he had a hand in authoring like clean water, clean air, solid waste management, biodiversity, protected areas, well aware that the Philippines is a “debtor” country that takes far more natural resources than it can replenish for the ecosystem

Part of his recommendations is to “greenstream” ecological concerns across all departments — a paradigm shift as cabinet discussions are usually dominated by issues of unemployment, inequality, education and other pressing problems that drown out environmental issues. 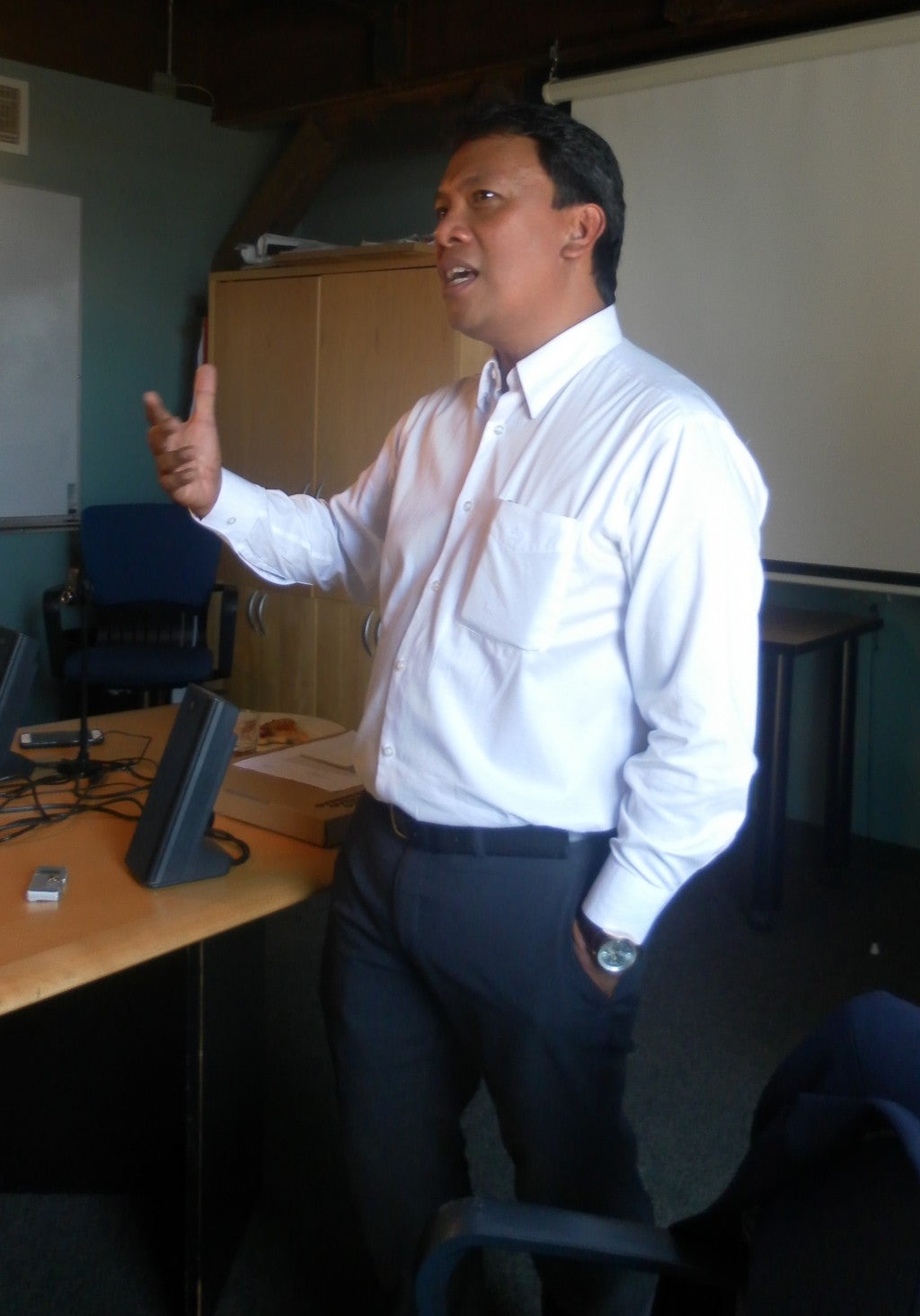 Presidential Adviser on Environmental Protection Neric Acosta explaining his role in the Cabinet.

“I called it greenstreaming. It is my dream that ecological concerns would become a natural thing to consider in all policy deliberations in the cabinet, local governments and all agencies,” Acosta said.

He said further, “I hope that the future leaders of our country will make use of GFN tools, tools of ecological sustainability in measuring what is available given our biocapacity — our forest, lakes, rivers, seas — vis-a-vis our footprint, our carbon footprint or what natural resource we use.”

Among the bigger concerns Acosta mentioned aside from the “competing” urgencies in education, housing, mass transit, agriculture production, the floods, traffic, pollution, illegal logging and natural calamities, is the management of the Laguna Lake basin, the largest lake ecosystem in the Philippines.

The basin is very near Metro Manila and its environs where an estimated 25 million people live in a land area of less than 5 percent (1.5 million hectares) of the 30 million hectares of (Philippine) land.

The most densely populated place on the planet, he said, is Metro Manila (more than Sao Paolo in Brazil, Calcutta in India, and Jakarta in Indonesia) where a quarter of the total population is concentrated in a roughly 65,000 hectares of land. The lake is around 100,000 hectares in size, which can fit the whole of Metro Manila or even Singapore.

Among the most important considerations Acosta emphasized in the management of Laguna Lake were:

“I once was on a fish pen demolition job when I was contacted by the Speaker of the House, saying that the owner was a politician who has joined their political party,” the Liberal Party stalwart Acosta recalled.

“All I could say was that it was too late as the fish were all gone after the structure was demolished. I was given police escorts after the incident as armed men stood guard by the fish pens.”

Filipina GFN Asia Regional Director Pati N. Poblete asked, “Do we need to be more prescriptive? Do we diagnose?”

Poblete explained that to maintain GFN’s scientific integrity, it decided to focus on giving tools and methodology so that the government itself can identify what’s wrong and right. “It is not our place to say what is and not right,” Poblete disclosed.

An option that GFN President Mathis Wackernagel offered was to, “come up with a menu of policy alternatives instead. It may also be good if a network of similarly-minded individuals from different nations (are pooled) to help and leverage each other would be helpful.” Acosta agreed. 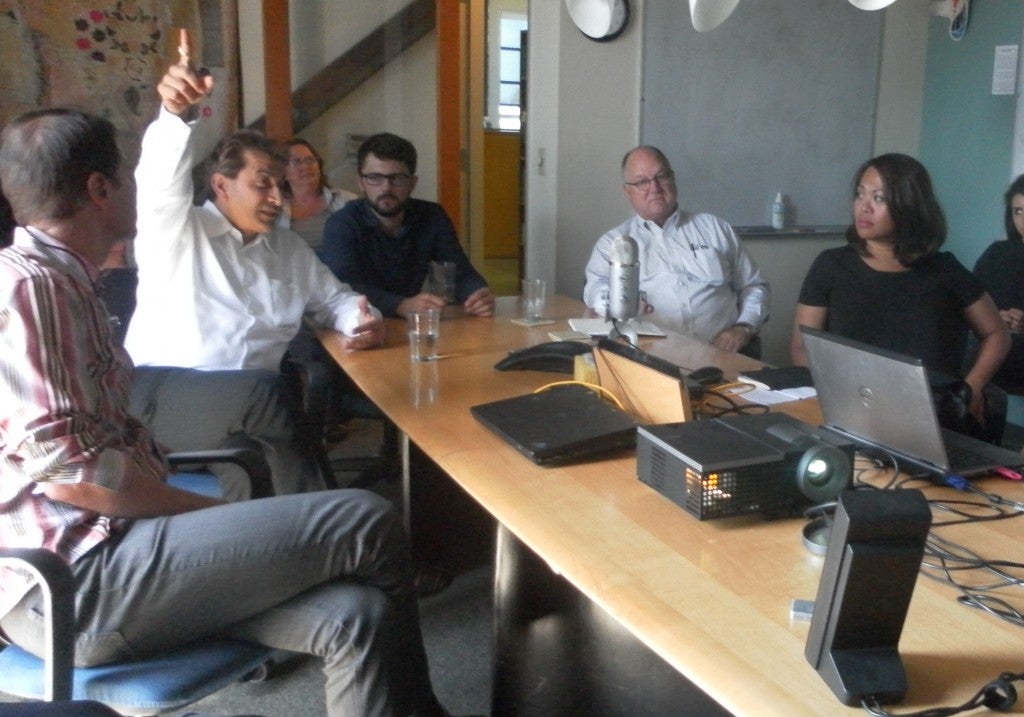 Sarosh Kumana commended Acosta for explaining that there is reason for hope and optimism for the Philippines and the world. Kumana is president and board director of Sand Hill Angels, a group of successful Silicon Valley executives and accredited investors. He is also the founder of Sustainable Future, which has a long-standing commitment to sustainability on the planet.

“He is an inspirational leader and we are delighted to have an opportunity to hear him today,” Kumana said of Acosta. “He is absolutely correct in the urgency he spoke of and we need more like him everywhere. If all politicians will be more like him, the world would not be in a mess that we are in today. I hope to have more interactions and work on some programs with him.”

GFN board chairman Terry Vogt was impressed. “(Acosta) has got vision and the right direction in terms of how you take difficult problems like the environment in a wonderful country like the Philippine and turn that into solutions. I think the Philippines is lucky that they have an Office of the President looking at this.”

Wackernagel echoed Kumana in praising Acosta. “The Philippine is the most exposed in a lot of ways. In a country where there is not such high income, and with dire deficits they are doubly exposed. And I think what Acosta does so well is understanding the need, the immediate urgency and anticipate the outcome.”

Currently the secretary general of the Council of Asian Liberals and Democrats (CALD) and convenor of the Philippine Imperative on Climate Change, Acosta holds doctorate in political science from the University of Hawaii as an East West Center Scholar and has attended the special programs Leaders in Development (1999) and Environmental Economics (2002) at the Kennedy School of Government of Harvard University. In 2004, he was named the first Filipino World Fellow of Yale University.