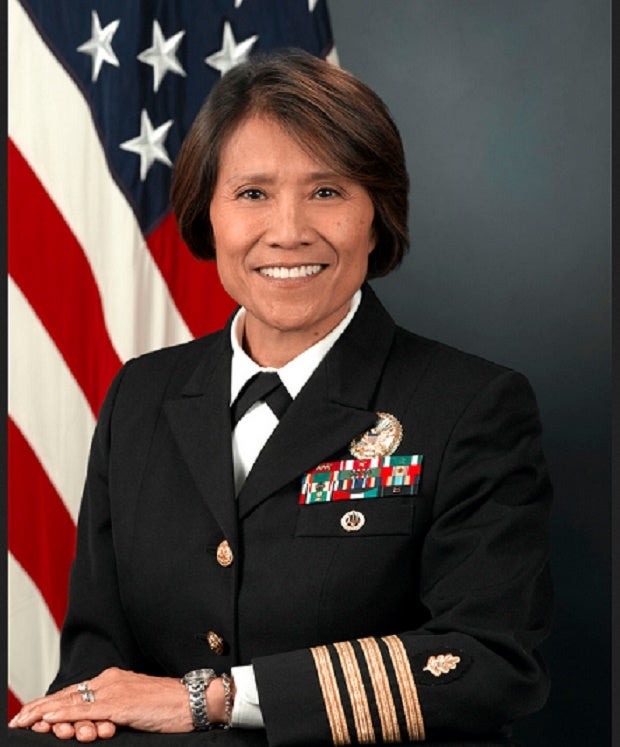 LOS ANGELES – President Obama has nominated the granddaughter of a Filipino veteran of World War II for promotion to the rank of vice admiral in the United States Navy and for the position of Defense Health Agency (DHA) director, Defense Secretary Ash Carter announced yesterday (Friday in Manila).

If her nomination is approved, Navy Rear Admiral Raquel C. Bono will become the highest ranking Filipino-American naval officer in the US.

Bono currently serves as director of the DHA’s National Capital Region Medical Directorate and the 11th chief of the Navy Medical Corps.

Bono and her brother, now retired Rear Admiral Anatolio B. Cruz III, made history in the US Navy earlier when they became the first and only siblings of Filipino descent to hold flag-officer ranks simultaneously, according to the DHA website.

Vice Admiral Matthew L. Nathan, US Navy surgeon general, has described Bono as a “role model” for others to emulate and acknowledged the contributions of her family.

Bono’s grandfather was a Filipino obstetrician who served in the US Army as a colonel during World War II. Two decades after the war, Bono’s parents migrated to the US and settled in Minnesota, where her father completed his surgical residency and became part of the Navy Reserve, retiring as a captain.

According to an article in the US Navy website, Bono initially wanted to go into nursing but her father challenged her to become a doctor and showed her that there were no limits to what she could do.

Bono was commissioned in 1979. She got a Navy Health Professions Scholarship and earned her medical degree at Texas Tech University.

She began her military career with a general surgery residency at Naval Medical Center Portsmouth in Virginia, becoming the first woman to graduate from this program.

“Service to others; service to country. It was ingrained in us by our father and mother in gratitude to their adopted country, the United States,” Bono was quoted as saying in the article.

Read Next
Pedophile deported to UK
EDITORS' PICK
Ahead of ONE: Full Blast II, Mongkolpetch warns Elias Mahmoudi: ‘Watch out for my fists’
Alex Eala wins Grand Slam on Independence Day: ‘I hope I made my contribution to the country’
G7 rivals China with grand infrastructure plan
Rare earth metals at the heart of China’s rivalry with US, Europe
PNP, PDEA destroy P25.8M worth of marijuana in Kalinga
Kai Sotto continues to inspire Filipinos by sharing his passions and stories with Smart Prepaid
MOST READ
Chel Diokno, Bro. Eddie, Ate Vi decline 1Sambayan 2022 poll nomination
1Sambayan names 6 choices to pit vs Duterte’s anointed in 2022
Groups slam Duterte ‘surrender’ to China
G7 rivals China with grand infrastructure plan
Don't miss out on the latest news and information.

Ahead of ONE: Full Blast II, Mongkolpetch warns Elias Mahmoudi: ‘Watch out for my fists’

Alex Eala wins Grand Slam on Independence Day: ‘I hope I made my contribution to the country’

Rare earth metals at the heart of China’s rivalry with US, Europe

PNP, PDEA destroy P25.8M worth of marijuana in Kalinga

PH to launch biggest satellite in 2023