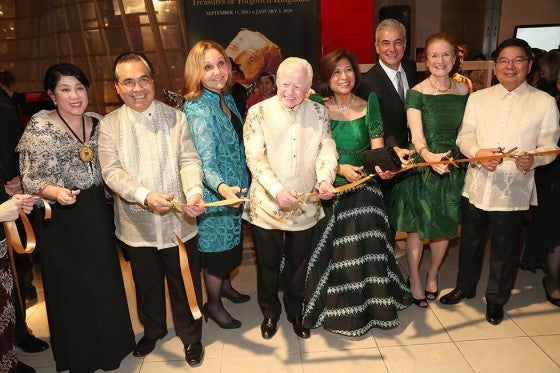 The exhibition’s Dinner Gala followed on Friday, September 11, followed still by the Fil- Am Community Celebration on Saturday, Sept 12 and the Rondalla Concert the next day.

The Philippine Gold artifacts are on loan from the Ayala Museum to Asia Society in New York from September 11 thru January 3, 2016.

The 120-piece exhibition is part of the 1,000-plus collection housed at the Ayala Museum, which were acquired from Filipino collections of the Bangko Sentral ng Pilipinas and Leandro and Cecilia Locsin.

Doris Magsaysay Ho thanked her co-chairs Loida Nicolas Lewis and Fernando Zobel de Ayala, and talked about how when they first envisioned the project with Asia Society, “We thought how wonderful it would be to bring a spotlight on the Philippines as the Philippines hosts APEC [in November]. This is so exciting for every Filipino to be able to see this in New York and for the world to learn about this world of the Philippines before the Spanish came.” 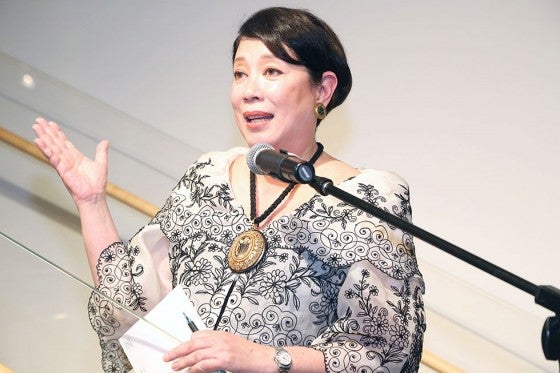 “This is truly a great day for the Philippines, for the Unites States, and for all who care about our shared histories,” said Josette Sheeran, “[Tonight we are celebrating] a great nation, a great people [and] a great history and civilization. As the world gathers for the 70th anniversary of the United Nations, and New York fills with presidents and prime ministers from all over the world, we will bring them to see this celebration of the Philippines here at Asia Society.”

“In the beautiful and intricate jewelry, ritual implements, mythical figures, ceremonial masks all crafted incredibly in pure gold, we cannot but reflect on your blessings on our artisanal ancestors,” said Loida Nicolas Lewis, leading the gala dinner prayer. “These exquisite creations are proof that even before colonizers came to our shores, you already blessed our ancestors with a high level of civilization and culture – a rich heritage indeed.”

Ambassador of the Philippines to the United States Jose L. Cuisia Jr. remarked that the exhibition is a “great reason to be proud of our ancestors and our heritage. Filipinos who come and view this glittering exhibition will increase their knowledge and develop greater appreciation of where Filipinos come from. Our American friends on the other hand will gain new insights into Philippine history and cultural heritage.”

“Gold is a thread that connects the past, present and future,” said BSP Governor Tetangco. He toasted the “Philippine Gold: Treasures of Forgotten Kingdoms,” saying it would leave a legacy for future generations. The Philippine Gold artwork gives an insight of the kingdoms of 10th to 13th centuries. Upon the arrival of the Spanish, much of the Philippine historic collections of gold were wasted through the centuries with the confiscation, conversion to bullion and conveyance to Seville, Spain.

The American Choral Project’s presentation of Philippine songs from Mindanao, Mountain Province and Manila highlighted Friday’s Premiere Night Gala, which marked the opening of the exhibition. It helped launch a season of programming that highlights the richness and diversity of Philippine culture and explores its cuisine, performing arts, film, design, literature and more.

While it was Fashion Week in NYC, Philippine Gold also had its Fashion Night with a runway parade of Filipiniana ternos, barongs and native motif gowns accompanied by Philippine Muslim gong music played by Kinding Sindaw.

Loida Nicolas Lewis expressed her elation that Asia Society was transformed back into the 10th Century with the Philippine Gold exhibition. She related that the bulk of the collection was discovered in 1981 when a bulldozer operator named “Berto” saw the glint of something shinny in the earth. He chased away his co-workers at a construction site in Surigao del Sur, and saved gold belts, crowns and other gold objects.

The hoard made its way to the Locsins, who in turn handed it over to Bangko Sentral ng Pilipinas under Governor Jaime Laya at the time. It was safe from treasure hunters who would melt the find down to sell for gold weight, and secured from political confiscations which was a high risk in the 1980s.

“We had a civilization before the Spanish colonized our shores,” Consul General Mario De Leon said. “The Filipino American community and the whole United States will be able to see for the first time the skill and artistry highlighted and celebrated promoting better understanding and appreciation of Philippine history.”

Citing the “geometry and genius” of the collection, he was particularly fascinated by the symmetrical and linear designs of the gold works. Gold cords, neck ornaments, wrist wraps and waistbands were created in intricate forms and complex patterns with segmented tubular beads, granulated beads and alternating filaments.

De Leon continued to point out that gold was found all over the Philippines, saying the Tagalogs, Pintados, Negritos and Mindoro had gold. The Philippine Gold gives a glimpse of the roles of the people, the relationship with neighbors. “The designs reflect identity,” he said. “History is not written by the victors. This exhibit retells the history – our golden history.”

On Saturday, “Langhapin, Lasapin, Namnamin…Pag-Ibig” was the highlight of the Filipino American Community Celebration. The cultural production was directed by Ben Dia and Herbert Go. Ralph Pena’s witty script explored the many facets of love through Philippine song and dance.

At the Philippine Gold Exhibition, the Rondalla’s Concert was an added treat on Sunday. Folks reveled in the stirring music and dances of Tunog ng Ulap Rondalla. A delightful plucked string ensemble, affiliated with the Iskwelahang Pilipino of Boston, performed original compositions and arrangements of traditional pieces celebrating the musical dynamism of the Philippines.