Is the Philippines really the most corrupt nation in Asia? | Global News
Close
menu
search

Is the Philippines really the most corrupt nation in Asia? 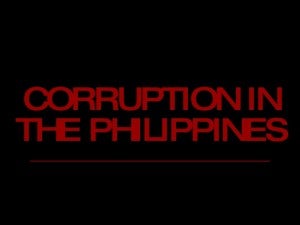 Graphic from PhilippinesLifestyle.com article claiming the Philippines is the most corrupt nation in Asia.

One of the most “shared” articles on Facebook, passed on to me by dozens of FB friends, was a news item that first appeared on PhilippinesLifestyle.com on August 15, 2015 entitled “New York Times Says Philippines Most Corrupt Out of Any Asian Nation, Survey Says” as authored by Timothy Walker, the website’s owner.

When I checked out the website, I noted that its masthead beckons tourists to visit the county because “It’s more fun in the Philippines.”

Only in the Philippines can the promise of corruption be considered a tourist attraction.

According to Walker’s article, “Under the shadow of a new survey, the New York Times considers the Philippines as the most corrupt country in the Asian region.  The survey released on Tuesday said that Singapore ranked as one of the least corrupt of the 13 Asian economies surveyed – the second least corrupt was Hong Kong and the third was Japan.

The survey said “The Philippines has the distinction of being perceived in the worst light this year.” “People are just growing tired of the inaction and insincerity of leading officials when they promise to fight corruption.”

The website article featured two comments. One reader (“Jun”) asked why this was “news.” If the survey had shown that the Philippines ranked “first in transparency or least corrupt Asian nation,” he wrote, then that would have been “a big deal.” Timothy Walker responded to Jun: “LOL. I don’t make the news, buddy, your country seems to produce enough of that for the world to see.”

But, despite his disclaimer, the problem is that the author did literally “make the news.” Walker plagiarized an article which originally appeared in the New York Times on March 13, 2007 by Carlos Conde entitled “Philippines most corrupt, survey says” and simply refurbished it.

In his March 2007 article, Conde wrote: “The survey, conducted in January and February, queried 1,476 expatriate executives in 13 countries and territories in Asia. The Philippines scored 9.40 where a score of zero is the least corrupt and 10 is the most corrupt. In the 2006 survey, in which Indonesia was regarded as the most corrupt, the Philippines scored 7.80. Indonesia improved its score to 8.03 this year, a development that the report credits to a government anti-corruption campaign. The report noted, however, that for the Philippines, Indonesia and Thailand, where corruption is systemic, “it is really splitting hairs to say which one has a worse problem.”

In Walker’s 2015 article, he wrote: “In all, the survey was conducted in over a two month period at the beginning of 2015 and questioned 1,476 expat executives in the 13 countries and territories throughout Asia. The Philippines scored 9.40 out of 10 on corruption, giving it the number one spot.”  In 2006, the same survey gave the most corrupt nation to Indonesia – in that same year, the Philippines scored a 7.80 – Indonesia was still high in corruption in 2015 with an overall score of 8.03. The survey however said that the Philippines, Thailand and Indonesia were systematic in corruption saying in fact they were all just about as bad as one another.”

What Walker did was to slightly tweak Conde’s article and make it appear that the corruption survey was only conducted this year and that the New York Times article about the survey was only published in August of 2015 and not in 2007. Apparently, no one called out Walker or his publication for his plagiarism and false claims.

So Walker’s lie spread like a virus not only in the Internet but also in the print media.

A Philippine Star columnist, Bobit Avila, used Walker’s false news article, ironically without attributing it to him, and reported in his “Shooting Straight” column on August 20, 2015 (“Under Noy, Philippines most corrupt in Asia”):“last Aug. 11th, the New York Times featured a highly embarrassing article that put the Philippines on top of Asia’s most corrupt economies. This is a testimony of the total failure of Pres. Benigno Aquino III’s so-called “Daang Matuwid.” Since the New York Times is not part and parcel of the Yellow propaganda machinery of the Aquinos, the whole world now knows how corrupt we Filipinos have become under the Aquino Regime.”

Avila went on to write: “While we submit that corruption was already endemic during the past administrations, however the Philippines was not on top of this embarrassing list. It was Indonesia that was numero uno. But now under the leadership of PNoy, we’re numero uno as the most corrupt economy in Asia. Shame on us!”

Avila added: “Allow me to get an excerpt from that New York Times article which said, “The survey said “The Philippines has the distinction of being perceived in the worst light this year.” “People are just growing tired of the inaction and insincerity of leading officials when they promise to fight corruption.” In all, the survey was conducted in over a two-month period at the beginning of 2015 and questioned 1,476 expat executives in the 13 countries and territories throughout Asia. The Philippines scored 9.40 out of 10 on corruption, giving it the number one spot.”

No one seems to have bothered to inform Mr. Avila of his error. Not that it would have mattered but he should have checked the New York Times to determine if there was such an article that appeared in its August 11, 2015 issue about its corruption survey.

Apparently, Mr. Avila just deduced the date from the fact that Mr. Walker’s piece came out on August 15 and in it, he referred to the New York Times article as having just appeared on the most recent “Tuesday” so he subtracted the days and came out with “August 11.” Presto. Why bother checking the facts?

I checked out Bobit Avila’s Philippine Star column of September 15th and it ironically starts with this line: “Nazi chief propagandist Josef Goebbels once quipped, “A lie told a thousand times assumes the substance of truth.”

Now, has there been a change in the level of corruption in the Philippines since the New York Times survey appeared in March of 2007?

According to Ralph Jennings of Forbes.com in his March 2, 2015 article “Why Graft is Declining in the Notoriously Corrupt Philippines,” the answer is yes, quoting Rahul Bajoria, a regional economist with Barclays in Singapore, who reports that ““systems and processes have become more transparent, and it’s largely reflected in government projects.”

“It’s tempting to elevate President Benigno Aquino III, since he took office in 2010 on a platform to cut corruption in a country fatigued by it. Corruption has ‘decreased dramatically’ because of Aquino’s tighter rules on transparency and government transactions, says Benedict Uy, a Philippine trade representative based now in Taipei. The decline in dirty deals began after he took office, analysts in Manila say,” Jennings wrote.

But Jennings does not attribute this decline to Pres. Aquino. “Not to discredit Aquino, but more credit goes to social media,” Jennings asserts, “the democratic country is rich in competing interests and free speech. Now with the surge in smartphone cameras and mobile devices, an opponent who sees someone in office take money or drive a bling-y new car can send a tweet or post the dirt to Facebook.

“Right now everyone in government and outside government is monitoring each other,” Manila-based Banco de Oro UniBank chief market strategist Jonathan Ravelas says. “Social media are there to ring the bells, so people try to be very careful in how they do things.” Graft remains, he says, but “it has gone down significantly.”

I don’t know. In the last month, I have been “ringing the bell,” reporting about the corruption I uncovered in the rental of an overpriced $1.8 million evacuation ship from Libya to Malta last year but there has still been no action by the Department of Foreign Affairs on this matter other than to write a feeble response.