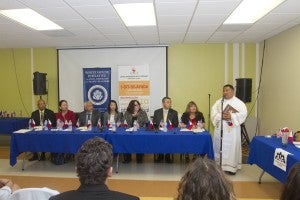 LOS ANGELES — A new one-stop hotline for Filipinos with concerns about their working conditions, rights and other related issues was unveiled on Tuesday, September 8, as an alliance was announced between community and non-governmental organizations, the Philippine Consulate General and state and federal agencies.

Through EMPLEO–Pinoy, members of the Filipino community now have access to a wide spectrum of resources for workplace-related issues and questions.

“Today is a new day for Filipinos who need help,” said Danny Pasquil, district director of the US Department of Labor in West Covina, during the program’s official launch on Tuesday. “EMPLEO–Pinoy will assist those who have questions about working conditions and the pay they are entitled to.”

The hotline will be housed and coordinated by the Pilipino Workers Center of Southern California (PWC). Whether callers have concerns regarding wages, discrimination, safety, or other issues, they will be directed to appropriate departments and agencies that can provide assistance by calling (877) TULONG1.

“Today we are taking action to make sure that we’re strong and that we’re actively reaching out, helping each other, helping ourselves and that’s what this program is about,” said PWC executive director Aquilina Versoza.

EMPLEO–Pinoy builds on the success of EMPLEO, which was launched in 2004 for the Latino American community. In its 11 years of existence, the EMPLEO program has collected millions of dollars in back wages for thousands of employees.

“EMPLEO–Pinoy is the next evolution of EMPLEO,” said Juan Correa, deputy regional administrator for the Wage and Hour Division. “We recognize that, especially in California, we have an important segment of the workforce that is our Filipino community. And we recognize the contributions that they make to the American workforce.”

The program will be staffed by Tagalog-speaking volunteers, who will be able to offer language and culturally sensitive assistance. It will serve members of Filipino communities through education and the protection of their rights.

“We know so many that are working below minimum wage, are not paid overtime and this shouldn’t be the reality here in the United States. We need to transform this reality, and so this is another step for the Filipino community to really gain more strength, more knowledge, and it’s also bringing us together in bigger networks as we grow and build our ties together,” Versoza said.

Maria de Chavez, 64, who was paid between $70 to $120 per day for 24-hour shifts in the 13 years she worked as a caregiver, encouraged those with workplace problems to take advantage of the EMPLEO – Pinoy hotline. She said the new resource is one that would have been useful had it existed when she began working in the United States in the early 2000s.

“If there was a program like this when I first arrived, it wouldn’t have just been me who would have benefited from it, given the number of Filipinos employers exploited,” she said in Tagalog. “It would have been a big help to have someone we could go to to tell about what they were doing to us. Not just because of the salary we were receiving, but also our living conditions at the home of our clients or patients).” 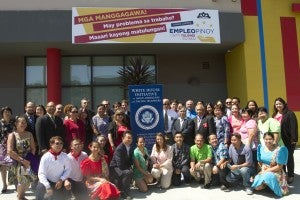 Alliance members after the launching.