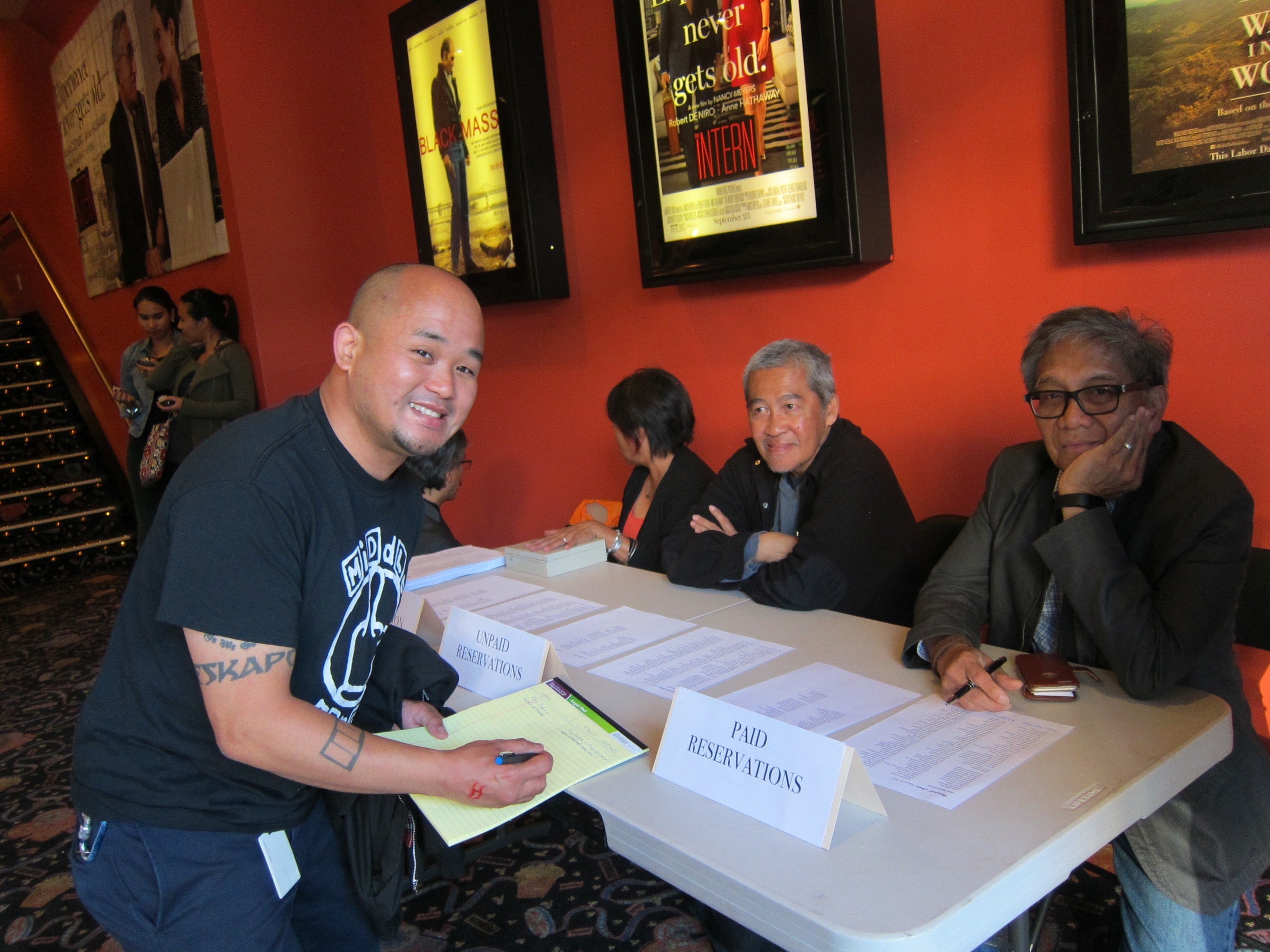 Rupert Estanislao, a student at City College of San Francisco, was the first to check in at the Marina Theatre in San Francisco for the showing of “Heneral Luna.” PHOTOS BY MILA DE GUZMAN

SAN FRANCISCO — More than 200 Filipino Americans from all over the Bay Area descended on the Marina Theatre in San Francisco on August 31 to watch the pre-release screening of “Heneral Luna,” Jerrold Tarog’s indie film on the life of General Antonio Luna.

Presented by the Philippine American Writers and Artists (PAWA) and its community partners, the film served as a major build-up for the bi-annual Filipino American International Book Festival scheduled from October 2 to 4 in San Francisco. All proceeds were earmarked to benefit the book fest.

A palpable excitement reigned at the Marina Theatre as moviegoers started lining up at 5:30 p.m. for the 7 p.m. screening.

PAWA President Edwin Lozada said that positive reviews and write-ups, social media announcements and a sleek and action-packed movie trailer had created a buzz in the community, although many Filipinos have professed little knowledge about General Antonio Luna. Well known heroes like Jose Rizal, Andres Bonifacio and Apolinario Mabini have eclipsed Luna’s place in history.

Deputy Consul General Jaime Ascalon, in his welcome remarks, noted that August 31, the date of the San Francisco screening, coincided with the celebration of National Heroes Day in the Philippines. He urged Filipinos to add historical movies and the upcoming book fest to their cultural fare.

By the time the movie ended, many audience members had learned in two hours what was sorely lacking in their knowledge of General Luna.

Luna, known for his volatile temper, was a member of the Philippine elite. He was educated in Europe and possessed many talents, a Renaissance man. He was a pharmacist, a writer, guitar player, and poet and he also studied military strategy and tactics. Historian Renato Constantino, in his book A Past Revisited, wrote that Luna was “widely regarded as the ablest general of the Revolution.”

At the outbreak of the Philippine-American War in 1899, General Emilio Aguinaldo appointed Luna as Commander-in-Chief for Central Luzon because of his bravery and military savvy during the successful struggle for freedom against Spain. While initially a reformist, he became an ardent supporter of complete independence for the Filipino people.

But Luna was not only at war with the American colonialists. He was also waging a fierce war of ideas with members of the Aguinaldo cabinet (Aguinaldo became the president of the short-lived first Philippine Republic). Luna strongly raised his doubts, later proven correct, about the sincerity of the Americans in their promise to grant independence to Spain’s former colony. 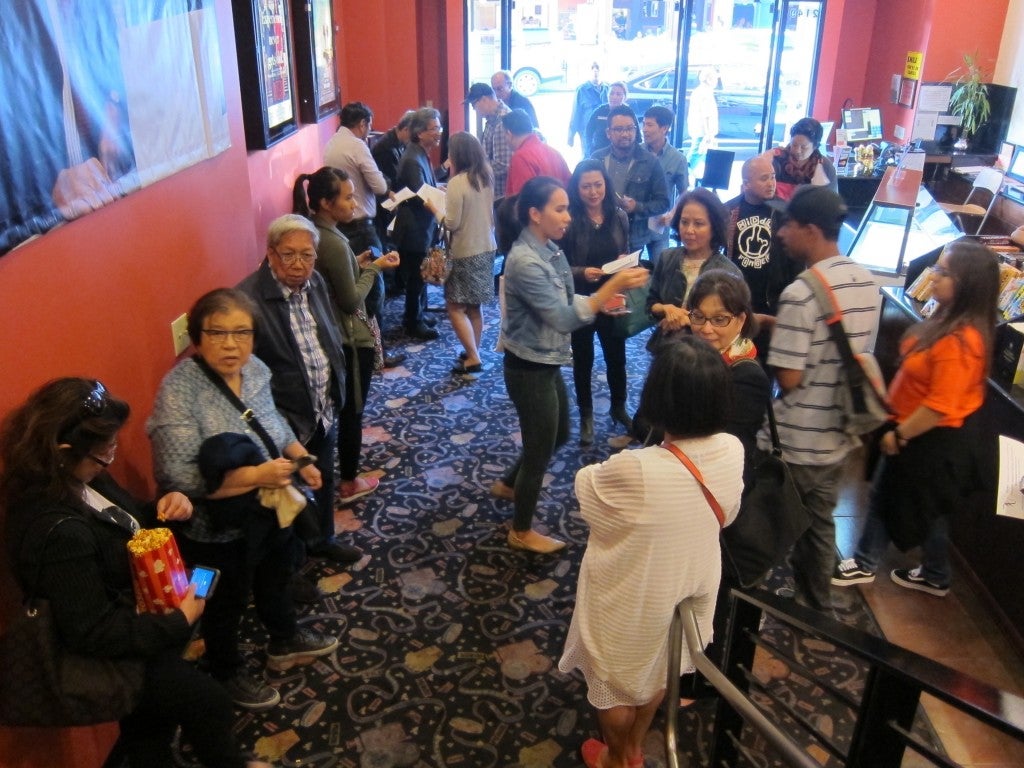 Crowd gathers at the lobby of the Marina Theatre as early as 5:30 pm for 7:00 pm showing.

While others began to capitulate to end the hostilities with the new invaders and agree to autonomy under American rule, the passionate general did not waver on his principles and proposed a guerilla war that could overcome the Filipinos’ lack of firepower and sufficient military skills.

But all this was to no avail. Ironically, Aguinaldo would later adopt this tactic, but it was a little too late to resist the onslaught of the American imperialists who would rule the country for the next four decades.

Paul Kramer, in his February 25, 2009 article in the New Yorker titled “The Water Cure,” focused on the infamous torture used by American troops against Filipino dissidents. He also highlighted the American drive to extend its global military and economic outreach towards the end of the 1800s that resulted in the Spanish-American War and Philippine-American War.

“The Americans were not done liberating. Rising trade in East Asia suggested to imperialists that the Philippines, Spain’s largest colony, might serve as an effective ‘stepping stone’ to China’s markets.” However, the war for domination of the Philippines proved disastrous in human terms.

Kramer wrote, “In the next three years, U.S. troops waged a war to ‘free’ the islands’ population from the regime that Aguinaldo had established. The conflict cost the lives of hundreds of thousands of Filipinos and about four thousand U.S. soldiers.”

While he himself was a member of the ilustrado class, Luna became the conscience of the officials of the struggling Philippine government, who mostly came from moneyed families. He kept posing the critical questions that still ring true in the present Philippine political scene, wracked by pervasive graft and corruption:

Hamstrung by dwindling support from Aguinaldo and his cabinet members, an ill-trained army plagued by regionalism and increasing intransigence from officers who rebelled against his strict discipline, Luna met his violent death at the hands of members of the government army.

Although Aguinaldo was accused of plotting Luna’s assassination, he strongly denied the charge and no one was ever arrested for the crime. Interestingly, he was also deemed involved in the earlier murder of another hero, Andres Bonifacio, the founder of Katipunan, the armed revolutionary organization against Spain.

Filmmaker Tarog worked with E.A. Rocha to do the film adaptation based on the original script co-written by Rocha and the late Henry Hunt Francia 17 years ago. They also used as background Vivencio Jose’s book Rise and Fall of Antonio Luna and Nick Joaquin’s A Question of Heroes but took artistic license to make Luna’s story more accessible to the young generation.

In an interview with INQUIRER.net’s Pocholo Concepcion, Tarog said, “Luna’s life fascinated me because he didn’t care whether his actions would cause the ire of people around him. What mattered to him were his principles. … At the same time, he had flaws in his character.”

“Heneral Luna,” which was shown at special screenings in some major U.S. cities, has been garnering rave reviews, and its September 9 release in the Philippines is expected to attract big audiences. In preparation for the Philippine premiere, the advocacy group Dakila, brought a 15-minute preview of the film, as well as historians, to 40 schools nationwide, eliciting much excitement among students.

The response of the multi-generational Filipinos who flocked to the Marina theatre was no less enthusiastic.

Peggy Peralta, the cinematographer of the much-acclaimed film “Harana,” which won the Audience Award at the SF Center for Asian American Media Film Festival in 2013, stated that, “Heneral Luna is a beautiful film that doesn’t just tell but more importantly, it questions.”

Peralta, who also shot the new documentary “A New Color” about the life of famous African American muralist and teacher Edythe Boone, who worked on the stunning mural on the Women’s Building in San Francisco, added that, “Films like ‘Heneral Luna’ help us understand ourselves more deeply and encourage us to reflect and de-colonize ourselves, with humor.” Her new film will be shown at the Mill Valley Film Festival in October.

A former anti-Marcos activist, Edwin Batongbacal, stated, “General Luna was singular in his resolve, despite the risks to his safety to bring about an independent Philippines.”

Batongbacal has not lost hope despite the recent exposes on self-serving and corrupt Filipino politicians. He said, “There are inspired and dedicated Filipinos everywhere, but they don’t get as much airing. We have to begin looking for these heroes in our midst and perhaps elect them into positions where they can do much good. In the process, maybe we can get in touch with the hero in ourselves.”

Thelma Estrada, an environmental attorney and a member of a local Filipino-American book club that focuses on writings on Filipino and other immigrant experiences, was effusive about the film. She said, “Movies such as ‘Heneral Luna’ should be seen by all Filipinos. How else can we move forward as a nation if we do not cultivate more educated, self-aware, astute citizens?” 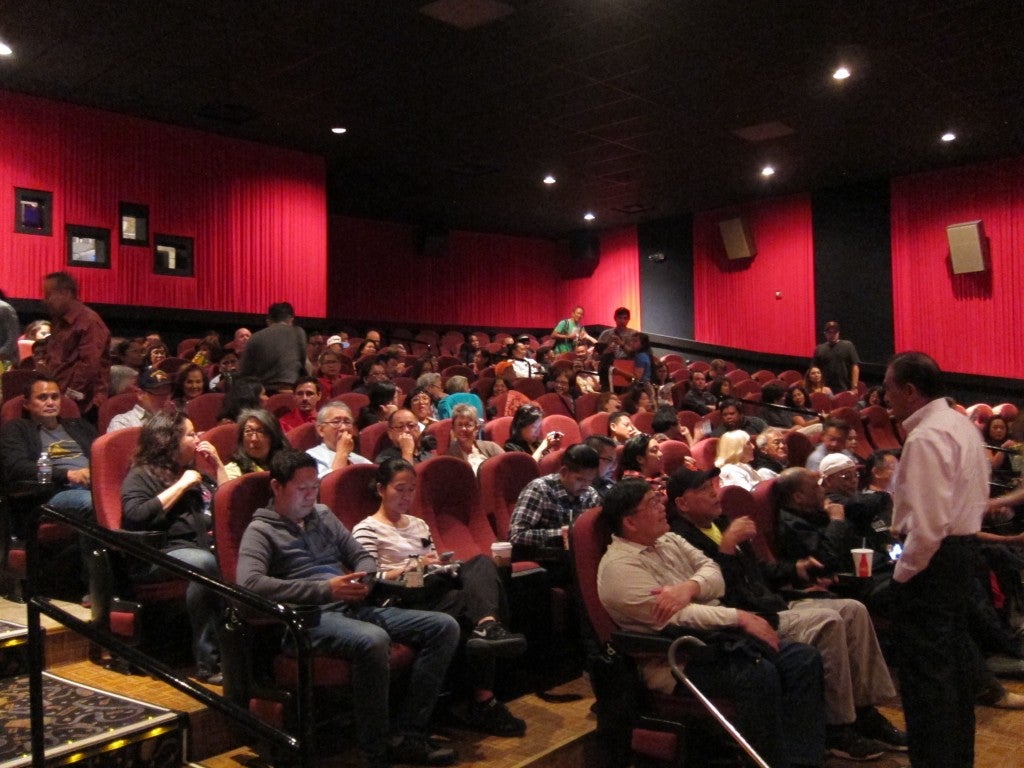 Over 200 attended the pre-release screening of the biopic of General Antonio Luna in San Francisco.

“The film is very well made, the production values are excellent, and the performances, especially John Arcilla’s Luna, are above par,” said Mauro Tumbocon, a member of the book fest committee and founder and director of FACINE, a community partner of the book fest.

Through FACINE’s film festival held annually in late October in San Francisco, Tumbocon has made it his mission for the last two decades to nurture the arts and build an audience for indie and experimental films in the Filipino community.

He stated, “Showing historical films such as ‘Heneral Luna’ can be a venue to engage our community on issues relevant to us here in the U.S. Notably, this film touches on the Filipino American War, which should ignite questions about Philippine-American relations, which still holds to this day.”

One dominant message has sparked spirited discussion among some members of the audience: “Because of the regionalism and division among the Filipino leaders during the Philippine-American War, are we our own worst enemies?”

Tumbocon felt that no inquiry was made into the role of the colonial aggressor, except for a few side remarks, and no nuanced understanding of what constitutes nationhood.

Tarog, who not only megged but also scored the whole film, had indicated in the INQUIRER.net interview that his mission was to help show the problems of Philippine society and betrayals that have altered Philippine history. He has announced that “Heneral Luna” could be the first in a trilogy of biopics of Filipino heroes that would include Gregorio Del Pilar and Manuel Quezon.

PAWA’s main organizer of the “Heneral Luna” showing and October book fest, Edwin Lozada, stated that, “Encouraging self-examination and more critical thinking is one of the goals of the film.  And judging from the attendance, enthusiastic response, and dynamic debates on the themes on both sides of the Pacific, the film has clearly succeeded.”