Fiesta of all fiestas regale Filipinos in Toronto 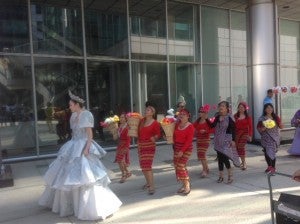 TORONTO, Ontario —  David Pecaut Square in Toronto became a full blown Filipino plaza in fiesta mode on Saturday and Sunday August 29 and 30, because of the Mabuhay Philippines Festival 2015, produced and organized by the Philippine Independence Day Council (PIDC).

This year’s celebration had “Kulay” (Colors) as its theme, and a more motley, eclectic and fabulously unique Filipino festival in Toronto has yet to be experienced.  Beauties galore in sequined gowns and bejeweled crowns, tribal dancers in feathers and masks, local talent breakdancing and rapping to everyone’s delight kept the crowd in a holiday mood–and admission to the event was free. 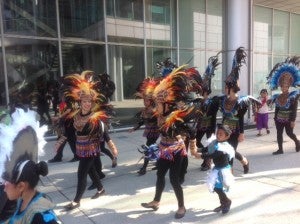 The 17th incarnation of the Mabuhay Philippines Festival showcased seven fiestas drawn from the length and breadth of the Philippine archipelago.  There’s Panagbenga (Baguio), Moriones (Marinduque), Sinulog (Cebu), Dinagyang (Iloilo), Masskara (Bacolod), Kaamulan (Malaybalay), and the ever popular Marian processional devotion Flores de Mayo, held in almost every Philippine town and barrio in the month of May.

As if the color from the tribal festival dancers was not enough, a fashion show produced by Agnes Miranda featured stunning creations of Renee Salud and Shanon Pamaong paraded onstage by models from IPEN (International Professional Entertainment Network).

Norma Carpio, the founding and current president of PIDC, said that the first Mabuhay Festival was held in 1998 to celebrate the 100th year of Philippine independence. 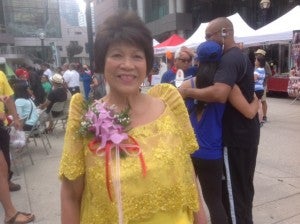 “The celebration was held at the CNE (Canadian National Exhibition) and serves as the winning template to gather together more than 70 Filipino Canadian community groups.”  Carpio added, “It is the best way to have fun, bid farewell to summer, and celebrate our heritage.”

Holding the festival in the heart of downtown Toronto, “is in line with PIDC’s commitment to its mandate of honoring Philippine traditions, bringing forward (Philippine) culture to the consciousness of mainstream society,” said Carpio. 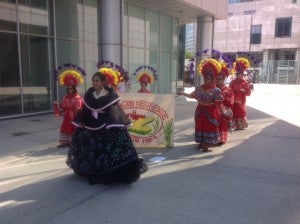 Members of the Federal Conservative Party (PC), the Federal National Democratic Party (NDP), and the Federal Liberal Party marched in the parade and manned information booths at the festival, hoping to connect with the fourth largest minority group in Canada boasting a pooled community income of over three billion Canadian dollars (C$3B) a year.