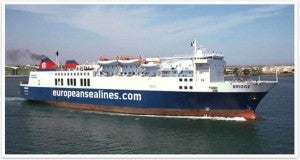 The DFA rented this ship for $1.8 million.

In your role as “spokesperson of the Department of Foreign Affairs,” you wrote to me on August 17 to respond to my article criticizing the $1.8-million rental by the DFA of the bedbug-infested ship used to evacuate 766 Filipino OFWs from Libya to Malta on August 15, 2014.

It would be inaccurate to characterize your letter as a “response” because it did not address any of the issues raised in my article, which first appeared in the Inquirer.net on August 13, 2015 (http://globalnation.inquirer.net/127230/1-8m-ship-rent-for-ofw-evac-from-libya-to-malta-is-questionable) and also on the front page of The Malta Independent three days later (http://www.independent.com.mt/articles/2015-08-16/local-news/Philippines-government-questioned-over-choice-of-ship-used-to-evacuate-workers-from-Libya-to-Malta-6736140541).

Why did Rome Consul General Leila Lora-Santos, as head of the Rapid Response Team – Malta, enter into a $1.8-million contract with Alex Polidano, a local Malta broker, to ferry 766 Filipino OFWs from Libya? 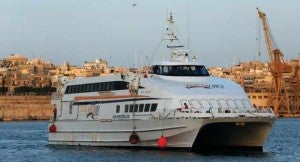 The DFA could have rented this catamaran for two trips at $767,776 instead.

In my article, I disclosed the fact that on behalf of Philippine Ambassador to Italy Virgilio Reyes, Mr Kevin Attard, a Malta businessman, had obtained a firm offer from Virtus Ferries on July 29, 2014 to transport 450 Filipino OFWs from Libya to Malta aboard its high-speed first class catamaran ship for 345,000 euros. As it would have taken two ships to carry 766 passengers, the adjusted rate would have been 690,000 euros ($767,776).

Ambassador Reyes personally confirmed to me that he received the Virtus Ferries offer from Mr. Attard on July 29, 2014 and that he then provided it to Consul-General Lora-Santos before she departed for Malta to finalize the rental arrangements for the ferry ship.

But surprisingly, Ms. Lora-Santos chose not to contact Virtus Ferries about its offer when she arrived in Malta. Instead she contacted Mr. Alex Polidano, who at the time was the CEO of International Machinery Ltd. A “self-employed professional,” Mr. Polidano had no prior experience in evacuating anyone from Libya. [The Malta Independent also reported that “Mr. Polidano was a business associate of Ryan Schembri – a businessman who is still on the run from his creditors and is believed to have fled to Dubai.”]

Consul-General Lora-Santos then arranged for Overseas Workers Welfare Administration (OWWA) Officer Cynthia Lamdan to fly to Malta to sign the $1.8-million (1.5 million euros) contract with Mr. Polidano on behalf of “Ocean Marine Services Ltd,” which is not a registered company in Malta and is not even mentioned in Mr. Polidano’s resume on LinkedIn. 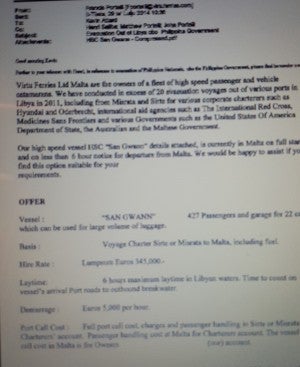 After signing the contract, Mr. Polidano then contracted with a Greek shipping company, European Seaways (europeansealines.com), to charter one of its two ferry ships, the F/B Bridge, to pick up the 766 Filipino OFWs in Libya and ferry them on a 221 mile voyage to Malta before returning back to its Italy to Albania ferry line.

In your August 17 letter, you explained that in the selection of Mr. Polidano, the “primary considerations included, among others, registered vessels that could undertake multiple load stops in Libya (to secure as many Filipino as possible in one voyage), with sufficient capacity level and previous experience in evacuating people from war-torn/crisis situations.”

But prior to this fiasco, Mr. Polidano did not have “previous experience in evacuating people from war-torn/crisis situations.” In his updated LinkedIn profile, Mr. Polidano now includes this new achievement – “Personally directed the high profile evacuation of thousands of Chinese and Philippine Oil & Gas workers (Ocean Marine Services Ltd) out of Libya during the recent conflict.”

In stark contrast, Virtus Ferries was used by the American and Australian governments to evacuate their diplomatic personnel from various ports in Libya to Malta in 2011. It had also been used for similar purposes by the International Red Cross, Medicins Sans Frontiers and various international corporations.

When my article was posted in the Malta Independent on August 16, people from Malta asked whether certain officials of the Philippine government had received “kickbacks” for steering the $1.8-million contract to Mr. Polidano instead of dealing directly with an established Malta-based shipping company, Virtus Ferries. This question was also asked by skeptical Filipinos who posted their comments in the INQUIRER.net and on Facebook.

In your “response,” you made no mention of any investigation into the suspicious circumstances surrounding this questionable contract. Of course, the DFA never promised to review this deal. But what you did personally promise to the press on August 18, 2014 was that the DFA would investigate the complaints of the 766 passengers on board the F/B Bridge. For what the government paid for their fare ($2,350 each), were they not entitled to be treated with respect? “Those accountable will be put to task,” you vowed. Remember?

The pinoy-ofw.com report noted a “video footage showed Filipino passengers sleeping on the floor while the cabins where children and elderly were staying were not in much better condition”; “The cabins were very hot, there was no air-conditioning and there were bed bugs on the cabin beds,” one nurse from Benghazi reported.”

In an ABS-CBN report, another Filipino nurse passenger reported that when she requested a cabin from a Filipino crew member on the F/B Bridge, he told her he would oblige her request in exchange for sex. The nurse then said she would report him to the DFA in Manila. The Filipino crew member replied that he wasn’t worried because he was confident the DFA would do nothing about her complaint.

Mr. Jose, a year after you vowed to investigate the complaints of the Filipino OFWs aboard that passenger ship, we still have not received your report. In fact, you avoided any mention of the DFA investigation in your letter. Sadly, that contemptible Filipino crew member was right. 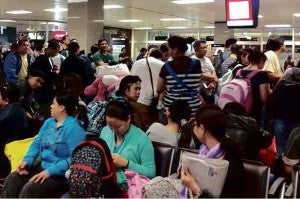 OFWs evacuated from Libya to Malta.

I realize that the likely $1 million overprice of the rental ship may seem miniscule compared with the billions in kickbacks the Binays were alleged to have amassed from overpriced hospital equipment, garage and school building construction and service fees. But they do matter to the OFWs who pay $25 each into an overseas workers welfare fund that is supposed to help them in times of need. The money lost to “kickbacks” could have been used to send home thousands of Filipino OFWs languishing in crowded apartments in the Middle East waiting for badly needed transportation funds.

It may not seem strange to see poor Filipino OFWs sleeping on the bare floors of an old, rundown, bedbug-infested ship traveling more than 24 hours from Libya to Malta compared with seeing rich American and Australian diplomats and their families luxuriating in a modern catamaran ship that only takes six hours to traverse the same distance. But to learn that the Philippine government paid $1 million more for substantially far less is galling and shameful.

If the DFA is incapable of investigating this travesty, then the Commission on Audit or the Ombudsman should do what needs to be done.