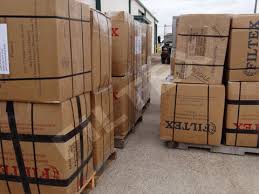 SAN MATEO, California – While the proposed inspection of balikbayan boxes entering the Philippines has been shelved as a result of global protests from OFWs, increased tariff charges on cargo container shipments have stirred less controversy.

While the Philippine Bureau of Customs clarified that individual balikbayan boxes won’t be taxed, it’s not clear if  increased levies on the cargo containers they are shipped in will remain.

And would the successive tariff increases translate to markedly fewer door-to-door balikbayan boxes sent to relatives by Filipinos abroad?

It’s a question freight forwarders abroad are obviously mulling. According to a highly placed source in the forwarding industry (who asked not to be identified) a meeting has been scheduled in Southern California among freight forwarding companies in North America.

The source hinted the meeting would most likely delve on the new Bureau of Customs tariff ruling, a probable adjustment in rates and how these adjustments would affect the entire cargo industry.

There have been no replies to email inquiries to representatives of U.S.-based freight forwarders like LBC.

In early August the Bureau of Customs adjusted the tariff per container shipment entering the Philippines by P40,000 more, from the original P80,000 to P120,000.

But by October, a new tariff adjustment will be levied at P60,000, bringing the two tariff increases to roughly P180,000 per container.

“It will be like buying the items here at such a price and then paying for them again once rates increase to ship box-full of goodies, “ according to Dela Cruz, a Daly City resident. “My relatives could buy the same goods in Manila for cheaper.”

“Dante,” a San Francisco Bay Area resident who is about to retire in the Philippines, worries about the tariff increases.

“I have been doing some calculation and with the new taxes, how much will I pay more for the dozens of boxes I have to ship home when I bring my family back to Manila this January?”

He added: “I was planning to bring home my Mercedes Benz, but with this new tariff that I heard off, I’ve totally changed my mind, “ he added.

Shipping charges today start anywhere from $65 to $120 per box depending on sizes and drop-off locations.

At least 300,000 balikbayan boxes are reportedly shipped to the Philippines by freight forwarding companies annually during Christmas season alone. And about 1,500 containers arrive at the Bureau of Customs each month.

Key players in the global Filipino cargo industry have so far remained resilient in meeting market demands. But it is unclear how it will respond to the coming adjustments.

In Northern California, these companies have launched more marketing initiatives to stay afloat; but a source said that around four or five freight forwarding companies have folded.

Some sources question a possible conflict-of-interest involved in the tariff rates. Customs Commissioner Alberto Lina, a presidential appointee, owns the Lina Group of Companies, which is in retail, food, travel, media, environment and logistics, and includes the cargo company Air21 as per the website: lina-group.com.

Meanwhile, Business Monitor International (BMI) Research, of the FitchGroup Company based in London, New York and Singapore, stated that congestion continues to be a critical problem for Philippine shipping.

BMI said congestion will remain a worry for the Philippine port sector over the medium term, and only infrastructure expansion projects will bring a resolution to the problem, which could threaten to derail the country’s plans to boost its role in the global shipping sector.