UP alums in Toronto tee off for scholarship, professorial chair 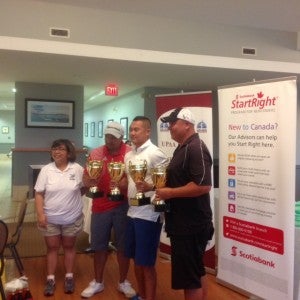 MISSISSAUGA, Ontario — Last year’s Best Foursome at the TeeUP High Golf Tournament did a repeat on the July 26 tourney at the BraeBen Golf Course in Mississauga.

According to Alice Herrera, current president of the University of the Philippines Alumni Association of Toronto, “All monies raised at this tournament will be used to set up the second UPAA Toronto scholarship.”

UPAA Toronto’s first major project to raise funds supporting an endowed professorial chair was set up in 1992.  Interest from the endowment provides the stipend to fund a professor’s work in research and creative pursuits.

A second endowment project was launched in October 2003, with a special committee co-chaired by Dr. Mario Andres and Dr. Victoria Santiago, to raise funds for a scholarship.

By December 2005, through the efforts of the co-chairs and support from the council and association members, a check for C$25,000 was presented to then-UP President Dr. Emerlinda Roman to establish the UPAA Toronto scholarship.  Interest earnings from the fund go toward covering a deserving undergrad’s yearly tuition, books and living expenses until graduation.

The UPAA Toronto Scholarship and the UPAA Toronto Professorial Chair are available at the College of Science in Diliman and are administered by the UP Foundation Inc.

Dr. Gilda C. Rivero, professor at the Institute of Biology, College of Science in UP Diliman, is the awardee of the professorial chair July 2011 to June 2012.