Nigeria donates US$300,000 for Yolanda-struck victims 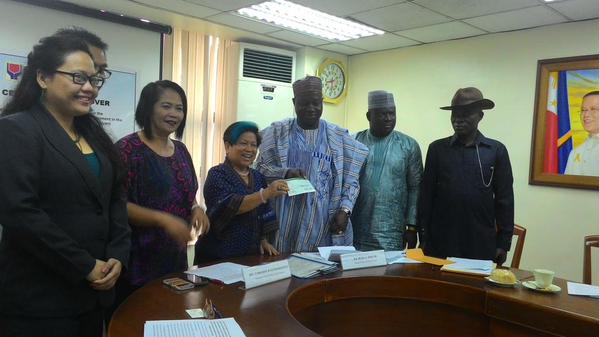 DSWD Sec. Dinky Soliman receives the US$300,000 donation from Nigeria for the victims of Supertyphoon Yolanda. JODEE AGONCILLO/PHILIPPINE DAILY INQUIRER

Amid the United Nations’ criticisms regarding the government’s slow rehabilitation process for victims hit by Supertyphoon Yolanda (international name: Haiyan), help from other countries are still pouring in.

On Wednesday, the Federal Government of Nigeria turned over to Social Welfare and Development Secretary Corazon “Dinky” Soliman US$300,000 and construction materials for the victims of Typhoon Haiyan or Yolanda.

In 2013, Haiyan, the strongest typhoon to hit the Philippines, killed more than 6,300 people and displaced 4.1 million.

Nigerian Ambassador to the Philippines Buba Tekune has said their government believes the assistance would make necessary impact in the area even after two years the onslaught of Yolanda.

“The significance of this gift should not be narrowed down as financial and material gift but rather be viewed from the premise of the desire of the Nigerian government and people to build long lasting bonds with the Philippines. I hope the donation would go a long way to support the commendable rehabilitation efforts of the Philippine government in the affected area.”

The donations will be used to buy huge power tanks to serve as water source for people in Tacloban, and start relocating around 1,000 families from bunk houses to permanent resettlement areas.

As of the latest report, around 2,000 families are in transitional shelters and bunk houses, according to Soliman, who has added that the government is still in the rehabilitation stage despite tremendous relief and early recovery efforts.

She cited the lack of land to build permanent shelters, increased priced of construction materials, lack of reliable water source and supply and procurement-related problems as big challenges in rehabilitating the affected areas.

“As of date, we could not move families in transition shelters” because they are still in search of a safe land for permanent shelter, according to Soliman.

Beyani, in a previous conference, added that the collective bunkhouses did not meet necessary minimum standards for the provision of basic needs and services.

“We have been working with the LGUs to address the problems, such as permanent shelter, having no water and electricity… Beyani pointed out areas for improvement, which we identified as concerns, too,” Soliman said.

Soliman said the donations have shown a different side of Nigeria, which has been perceived as a country struggling with poverty and against a drug trade involving syndicates that have been using women as drug mules.

“It’s very unfortunate that some Nigerians engage in drugs. The best way we can combat drugs is to continue educating our youth especially those who want to get rich quickly,” Tekune said.

In 2009, during the devastation of Typhoon Ondoy, Nigeria also gave similar donations to the country.

Philippines and Nigeria have maintained very cordial and friendly relations, since 1963, said Tekune.

There are 8,000 Filipinos in Nigeria who work mostly in construction and engineering firms while around 4,500 Nigerians stay in the Philippines to study, according to Tekune.