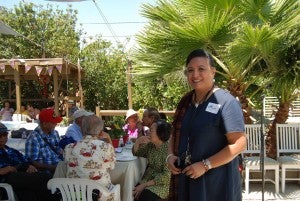 LOS ANGELES — “Juana,” (not her real name) is a 68-year-old Filipina who came to the U.S. on a fiancée visa to marry her husband, a former military man. She could have been part of the success story of many Filipino immigrants that is often cited by policy researches; but a string of tragedies struck.

Juana’s husband passed away, and she had cancer. “I tried to raise my son by myself, but my illness caused my son to become depressed, which developed into bigger psychological conditions,” she said.

“After my cancer treatment was completed, my son and I went back to the Philippines so that I can recuperate. We stayed there for eight months until my son got sick and was hospitalized.” 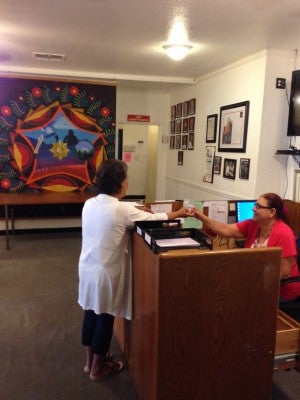 Mother and son (now 28 years old) soon became part of the seven percent of Filipino immigrants who live in poverty, according to the U.S. Census, compared with the overall population in the U.S.

Her destitution is not typical of the Filipino immigrant experience. For example, the median income of households headed by a Filipino immigrant in 2013 was a comfortable $82,370, versus $48,100 and $53,000 for all immigrant and U.S.-born households, respectively, according to the Migration Policy Institute. But exceptions like Juana’s experience occur.

“We stayed in a dingy hotel until all our funds ran out,” Juana said.  While meeting with a social worker she came across a Filipino agency’s name–Filipino American Services Group, Inc. (FASGI)—which was offering transitional housing.

“It brought tears to my eyes. I knew this was the place for us. So I immediately called. To my relief, I was told that there were beds available for both me and my son. We were placed immediately, on the same day,” Juana recalled.

Along with Juana, three other Filipino Americans are in residence in FASGI. They had different circumstances but the same sad lives. “We have had six Fil-Am participants in our transitional housing program,” reported Elena “Yey” Coronel, newly appointed executive director of FASGI.

There are 21 residents in the nonprofit based in Historic Filipinotown, which last week celebrated a colorful Foundation Day.

Since Coronel became the FASGI executive director there has been a relatively low participation of Filipinos in the program. One of the plausible reasons is the close-knit relationship in families that still believe in providing the “safety net” to their kin. Juana is one of the unlucky ones with no relative to turn to.

The transitional housing program managed by FASGI is funded by the U.S. Department of Housing and Urban Development (HUD) through the Los Angeles Homeless Services Agency (LAHSA) and the Department of Mental Health. 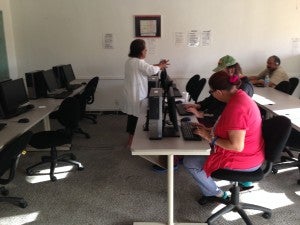 “Juana” (standing) with FASGI workers and volunteers who benefit from its programs.

Coronel is no stranger to the issue of homelessness and the provision of human services. She held several posts in the LA City government, one of which was as assistant deputy mayor with oversight responsibility on housing, homelessness, public housing, community development, human and social services, programs for People With AIDS. She served as liaison to the Housing Department, Community Development Department, Community Redevelopment Agency, LA Homeless Services Authority and Housing Authority for the City of Los Angeles.

“It’s an exciting experience to be the ED of FASGI because it allows me to give back to the community in creative ways that, hopefully, will make a real difference in people’s lives. Every day, there are challenges to face, but these are miniscule compared to the blessings that come,” she declared.

Coronel works with people wanting to volunteer their time and experts who are willing to operate programs for free.

She believes that Juana and the other residents will soon be able to move into permanent housing as they are prepared by FASGI workers and volunteers for full-time employment or are transitioned into a more permanent housing.

“It’s such a reward to see that smile on a resident’s face after a good meal lovingly prepared by our housing manager,” she beamed.

“We are able to take a close look at the issues in the community, qualify the existing resources, step out of the box to look at alternative solutions, and from there implement progressive ways in addressing the issues. The possibilities are endless and the opportunities limitless,” Coronel explained.