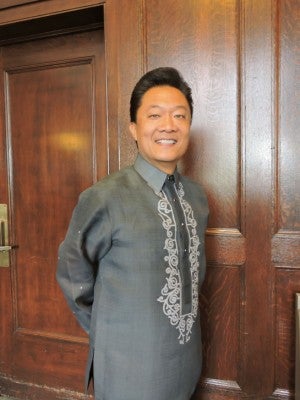 “This was very much unexpected, but very much a privilege and an honor to represent my family, my community, [SIPA], the broader Filipino American, Asian American Native Hawaiian and Pacific Islander communities,” Jacinto said during the reception.

Jacinto’s appointment makes him among only a handful of Asian Americans who have served in such a capacity, said Kevin James, president of the Board of Public Works.

“It’s significant that we have Joel’s representation,” James said. “We want the diversity of Los Angeles to be reflected in our work. And the best way to reflect it in our work is to have representation.”

In his new position, Jacinto will primarily serve as a liaison with the Bureau of Engineering, which, among other things, helps develop construction projects for public facilities, streetscapes, street lighting and sanitation, he said.

Los Angeles Mayor Eric Garcetti, said Tuesday that he selected Jacinto for the position because of the difference he has made in his community and to help organize the Asian Pacific Islander community so it can “have the muscle inside City Hall to get things done.”

Garcetti recalled, “I remember sitting down and saying, ‘This guy has something to offer. He has an infectious way of bringing people together. He has a belief in pushing his community and the larger community forward.” Garcetti said he has known Jacinto since running to represent District 13 in the early 2000s.

The mayor also credited Jacinto with being his “guide” in the designation of Historic Filipinotown, for which the mayor said he has received much recognition.

Jacinto, who has been involved in SIPA for more than 23 years, led the organization as it helped give birth to the Festival of Philippine Arts and Culture (FPAC), develop the Filipino American mural in Los Angeles and build affordable housing. The organization is also currently working on a new mixed-use affordable housing that will be on the SIPA site in the next couple of years.

He also previously served on the Affordable Housing commission and was recently awarded the Lifetime/Community Achievement by the Greenlining Institute, a Berkeley-based non-profit public policy, research and advocacy organization.

“One of the things I’ve already seen is Joel’s willingness, even before he started the job, to really hit the ground running on the extensive agenda that we have in Public Works” James said. “And he is already offering his vision, which is complementary of the mayor’s in getting back to basics and delivering public service.

With his new appointment, Jacinto will take a two-year leave of absence as executive director of SIPA. The period of his leave coincides with the remainder of Garcetti’s term.

However, he said he would remain involved in the organization. Amid Jacinto’s two-year leave, an interim leadership plan for SIPA will be revealed Wednesday, August 19, at the organization’s headquarters in Historic Filipinotown.