Now on its 22nd year, the annual event organized by the Filipino American Arts Exposition (FAAE) was kicked-off with a Pistahan parade of seven colorful cultural and historical-themed floats escorted by eight marching bands from different high schools, colleges and universities. 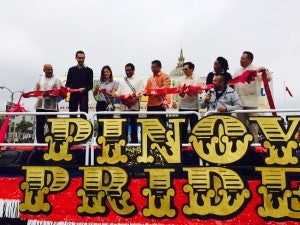 There were also lively community contingents that kept the stretch of major downtown streets of San Francisco, from City Hall to the Pistahan site at Yerba Buena Gardens, brimming with the Filipino-style fiesta spirit that many are accustomed to back home.

Topping the second day were The Filipino Channel (TFC) talents Matteo Guidicelli, Morrisette Amon, Matthew John Ignacio and Geneva Cruz, all of whom whirled out songs and dances that kept the crowd alive and on their toes. 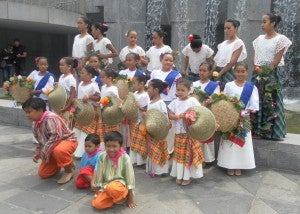 There were booths and pavilions galore. Aside from numerous commercial booths selling Filipino food, products and services, there were pavilions for martial arts, art and culture, technology and social media and creativity. Kaiser Permanente health pavilion, Ramar Foods Culinary Pavilion and Wells Fargo Heritage Pavilion added to the mix.

“The theme for this year’s 22nd Pistahan is ‘Home Away from Home’ as we want this to be a place for us to get a little taste of Filipino food, culture, music and community,” FAAE President Al Perez told INQUIRER.net. 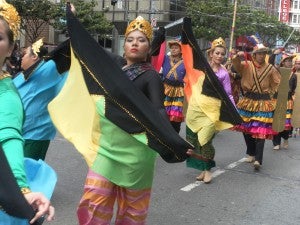 Dancers at the parade. PHOTO BY JUN NUCUM

Perez was particularly impressed with the turnout of not just Filipinos, but also by those from other ethnicities at the parade, which featured a lot more marching bands, and people watching the dazzling floats highlighted by the TFC talents float and a giant ten-foot Magnolia Ube flavor tub from Ramar Foods. 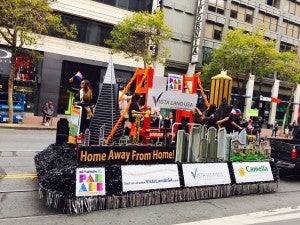 “It is a great way to be proud of our community and to show that we have arrived here in California,” Perez explained. “This year we curated the parade, took a more active role in inviting and selecting the parade contingents instead of just accepting whoever wants to go. We really want to find the best representation of the community.”

Deputy Consul General Jaime Ramon Ascalon was also happy with the turnout, that Filipino-] Americans and even non-Filipinos came out to attend the biggest community gathering in the West Coast. 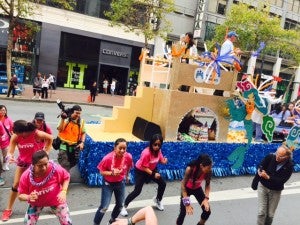 “It is a great opportunity for the Filipino American community to showcase the best of Filipino culture, through the different fields of arts including the performing and culinary arts, and through creative stuff like T-Shirts and other products. We are happy and thankful to the organizers for coming up with another successful Pistahan,” Ascalon said.

Representing the City of San Francisco, City Assessor Carmen Chu handed Perez and other FAAE officials a certificate of honor. Seen in the parade were Filipino community leaders running for office in the next election like candidates for supervisors Marjan Philhour of San Francisco and Mike Guingona of San Mateo County and Mae Cendaña-Torlakson, a California state assembly candidate who came with husband Tom Torlakson, state superintendent for public instruction.

“Participating in the Pistahan Parade and Festival was as heartwarming and inspiring. Having just returned from a family visit to the Philippines, Pistahan was especially meaningful to me this year,” Philhour stated. “It is critically important for Filipino Americans to celebrate events like Pistahan.” 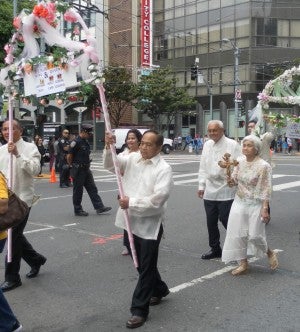 Fil-Am senior citizens at the parade. PHOTO BY JUN NUCUM

Philhour added that as the fastest growing Asian American population in California, Filipino Americans make contributions across all sectors including culture, politics and business. “It’s important that we celebrate those contributions in a visible way as we engender the pride of future generations. We are lucky to have such a culturally rich event available to all in San Francisco.”

Hermano Mayor of this year’s Pistahan was registered nurse Nicholas Nick Laureano, CEO and chairman of Vista Land USA. Laureano served in the U.S. Air Force for 22 years as a captain and saw action in the Desert Storm and Desert Shield and was a member of the NASA space Shuttle Medical Recovery team.

“Pistahan is about recognizing the hard efforts of unsung heroes who we have two or three jobs at a time, trying to make ends meet. So as we celebrate Filipino American culture that we have, we also salute the Filipinos who work day in and out and who belong to FIERCE- Filipino Individuals Engaged and Recognized in Community Excellence,” Laureano stressed.

Community Grand Marshal Mayor Ray Buenaventura of Daly City was excited that Filipinos at least once a year share a moment of solidarity among them.

“We are all here together, everybody is having a great time. It is the weekend in the year where we basically come together in one location and it is like we are back home here with the music, dancing, with the food, speaking Tagalog everywhere, etc. it is really nice. That is why I support it to keep remembering our history and celebrating our culture,” Buenaventura declared. 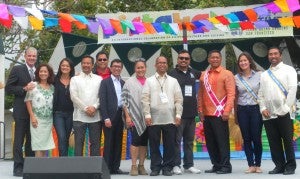 Mayor Buenaventura’s female counterpart was celebrity grand marshal Michelle Bumgarner, who was born and raised in Manila and now based in Indiana, trying to be first and only Filipino race car driver to be in the Indy 500 Indianapolis Speedway in the next years.

“It feels amazing to be here it is my first time coming from Indiana it is such good feeling to be the parade celebrity grand marshal also an ambassador for wellness in sport. I am a proud Pinoy and I want to show Filipinos you can do anything as long as you work hard for and set your minds to it. I am proud of Filipino because they are very supportive ad are all very strong. Keep on supporting me in my goal to achieving my goal in the Indy 500,” Bumgarner told the crowd.