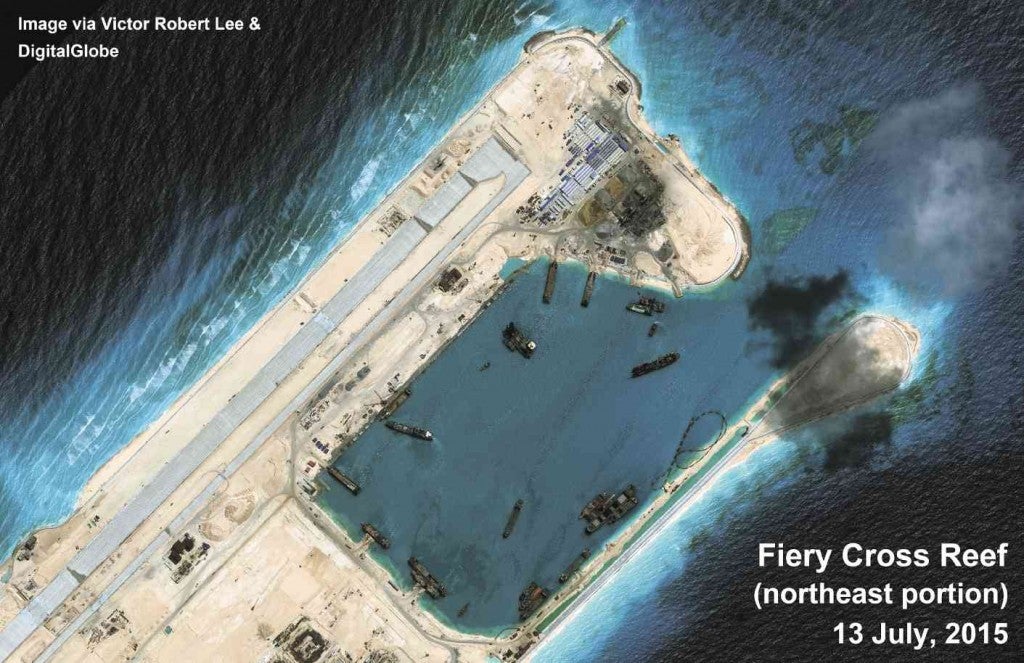 Photo from the air shows construction activities undertaken by China on Kagitingan Reef (Fiery Cross Reef), including an airstrip, in a disputed area in the South China Sea. PHOTO BY VICTOR ROBERT LEE AND DIGITALGLOBE

In a bid to defuse the escalating war of words over the South China Sea territorial claims, China said it already halted its land reclamation and insisted on efforts to promote peace and stability in the area.

“China has already stopped. You look, who is building? Take a plane and look for yourself,” China’s Foreign Minister Wang Yi told reporters on the sideline of the ongoing Asean Ministerial Meeting here.

“It is learned from relevant Chinese competent departments that, as planned, the land reclamation project of China’s construction on some stationed islands and reefs of the Nansha Islands will be completed in the upcoming days,” the Associated Press (AP) reported on June 16, 2015, quoting a statement posted on the Chinese foreign ministry website.

Citing the Chinese foreign ministry statement, AP reported that with the completion of reclamation work, the building of infrastructure for maritime search and rescue and research, as well as “defense goals,” would continue.

The claimant countries have since been working to draw up an official and binding Code of Conduct (CoC) to further promote peace and stability.

Later, speaking at a joint press conference with Thai Foreign Minister General Tanasak Patimapragorn, Wang urged claimant countries to commit to speed up the CoC consultations, avoid any acts to increase tensions, and to uphold freedom of navigation and overflight.

“Over the last few days, I met many Asean foreign ministers and leaders, and 90 per cent of the time, our meetings were devoted to furthering co-operation and mutual trust.

“We did not shy away from our differences, like this territorial dispute, but this issue between China and Asean does not represent the totality of our relations.

“It must be put into perspective,” he told reporters after the Asean–China dialogue.

Asean has repeatedly expressed unhappiness over the slow progress of the proposed CoC .

Wang said China was committed to resolve this matter through peaceful negotiations and consultations because it was the most realistic way forward.

“It is a commitment China has made and we will stick to that,” said Wang.

Earlier, US Secretary of State John Kerry said Washington wanted the security of critical lanes and fishing rights to be ensured in the area.

“We want to see the disputes managed peacefully and on the basis of international law.”

Asean secretary-general Le Luong Minh said the last three months had seen “massive” reclamation activities which went against the spirit of the Declaration of Conduct of Parties (DoC) which could change the status quo in the area and complicate consultations.

“These activities have to stop and this has been a concern for Asean as it is eroding the trust and confidence of the parties, complicating the process of negotiating the CoC,” he said in an interview with Malaysian media.

“We can only hope that with the positive agreement to start a new phase of negotiations which would be substantive, Asean and China can finally get to discuss the substantive elements and structure of the CoC and accelerate the process.”