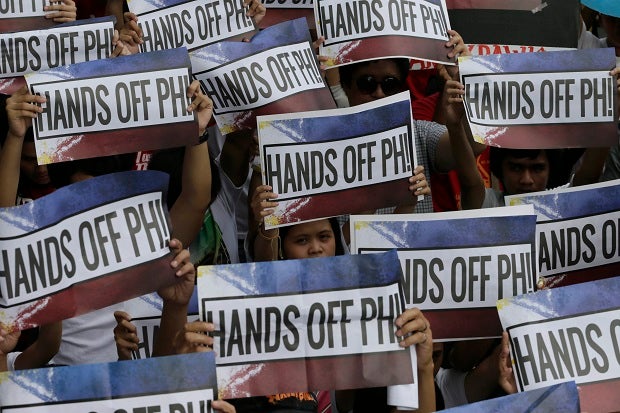 Protesters carry placards as they march in a Philippines Independence Day rally toward the Chinese Consulate in the financial district of Makati city east of Manila, Philippines, Friday, June 12, 2015. The protesters condemned the recent reclamation of land by China in the disputed Spratlys group of islands on the South China Sea. AP

BEIJING, China — China will complete land reclamation projects on its disputed South China Sea territorial claims as planned within days, the Foreign Ministry said Tuesday, in an apparent bid to reassure its neighbors over moves seen as sharpening tensions in the strategically vital region.

However, in a sign that developments were far from over, a statement posted to the ministry’s website said China would follow up by building infrastructure to carry out functions ranging from maritime search and rescue to environmental conservation and scientific research.

“It is learned from relevant Chinese competent departments that, as planned, the land reclamation project of China’s construction on some stationed islands and reefs of the Nansha Islands will be completed in the upcoming days,” the statement said.

Nansha is the Chinese term for the Spratly islands, which lie at the heart of the South China Sea territorial dispute.

Apart from satisfying defense goals, it said the main purpose of such projects was civilian in nature and not targeted at any third parties. It said the projects fell within the scope of Chinese sovereignty and were “lawful, reasonable and justified,” while causing no harm to the marine environment.

The statement, attributed to ministry spokesman Lu Kang, said the projects “do not affect the freedom of navigation and overflight enjoyed by all countries in accordance with international law in the South China Sea.”

That assertion will likely be scrutinized by the U.S. military following an incident last month during which a U.S. Navy plane flying near one of the reclaimed islands was repeatedly challenged by the Chinese military and told to leave the area.

The disputed islands lie amid some of the world’s busiest shipping lanes, rich fishing grounds and a potential undersea wealth of oil, gas and minerals. China claims virtually the entire South China Sea, while Vietnam, Malaysia, Brunei, the Philippines and Taiwan also they own parts or all of it.

The U.S. says it takes no side on the sovereignty questions, but insists on the right of free navigation and urges all parties to negotiate a settlement.

The reclamation work has sparked fears China will use the artificial islands as military bases and to assert control over navigation in the South China Sea.

According to the U.S., Beijing’s building program on reefs and atolls now totals more than 2,000 acres (800 hectares) and includes up to two airstrips capable of handling large military planes.

The announcement is a sign of transparency showing that China is proceeding according to its pre-established schedule, said Ruan Zongze, of the Foreign Ministry think tank China Institute of International Studies, speaking on state broadcaster CCTV.

“China is showing that it has its own timetable,” Ruan said.

That could be an attempt to reassure others that the projects are not open-ended, in hopes of limiting the damage to China’s relations with its neighbors.

Beijing attempted to keep the issue out of the headlines during a low-key visit to Washington this month by Defense Minister Fan Changlong, during which Defense Secretary Ash Carter called on China and others to “implement a lasting halt on land reclamation” and cease further militarization.

Vietnam, with whom China has clashed bitterly over the Spratlys and other islands, is sending its defense minister to Beijing this week for talks.

China also does not want the issue to overshadow President Xi Jinping’s state visit to Washington in September.