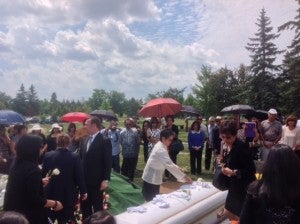 OAKVILLE, Ontario — Consolacion Quejas, popularly known as Mama Ching to the Filipino Canadian community in the Greater Toronto Area, was laid to rest on July 25, 2015, Saturday, at Glen Oaks Cemetery in Oakville, Ontario.

Mama Ching, 91, passed peacefully early Tuesday morning, July 21, after she was admitted to Trillium Hospital complaining of discomfort.  Her family shared that pneumonia and a viral infection were the cause of death.

Dynamic leadership and selfless dedication to the community were Mama Ching’s stock in trade, and her love for the Filipino Canadian was returned with interest by the object of her affection. 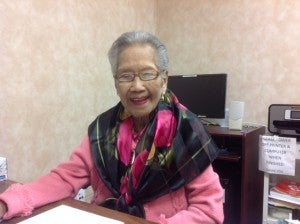 Consolacion “Mama Ching” Quejas will be missed by the Filipino community in the Greater Toronto Area.

For two days mourners trooped to the chapel where she lay in state, and their numbers spilled over to the next chapel and the corridors.  Her funeral cortege had vehicles in kilometer long lineups, from Sts. Peter and Paul Church on Mississauga’s Central Parkway East to Glen Oaks Memorial Gardens on Ninth Line in Oakville.

Tributes and offerings came from everyone–from the seniors who counted her as a friend, to community leaders who held her up as their leader and inspiration, to the Philippine government’s diplomatic representatives who experienced Mama Ching’s sincerity and influence as she interacted with the community. 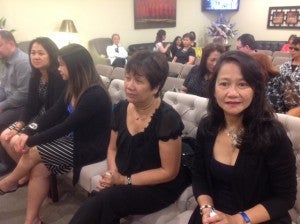 Philippine ambassador to Canada Her Excellency Petronila Garcia commented, “We join her family and friends in mourning the passing of Mama Ching…who will always be remembered for her numerous contributions to the Filipino Community in Canada.  A founding member of KCCC, Mama Ching was an inspiration to the Filipino Canadians in Toronto, who have become a very important and valued part of the Canadian cultural landscape. (She) will be missed by all, but we will remember her tremendous contributions toward bolstering the image of all Filipinos in Canada.  Rest in peace in God’s grace.” 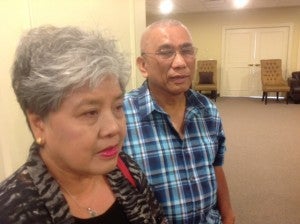 Fwd- For Lita and Felix Ordonez, Mama Ching was a high-profile community volunteer, dynamic and matchless in her service to Mississauga seniors.

From Philippine ambassador to Jordan and Palestine Her Excellency Junever Mahilum-West, “Filipinos in Canada are blessed with a community leader in the person of Mama Ching who had the steadfast vision to uplift the status and raise the profile of Filipino Canadians.  This vision took the form of building a community cultural center in Mississauga where the community could feel at home and be inspired in showcasing its Filipino roots.  These words come to mind when I think of Mama Ching: a strong sense of identity, exemplary civic engagement and unwavering perseverance.  Mabuhay ang tagumpay, inspirasyon at alaala ni Mama Ching!” 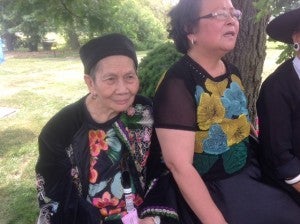 Prudencia Cuevas, 92, originally from Cadiz, Negros Occidental, was one of Mama Ching’s first friends when she came to Canada. Ms. Cuevas is a member of Silayan and is still very active in the Adults’ Centre.

Marilou Parcero, president of College of the Holy Spirit Alumni Association and KCCC supporter, stated, “Mama Ching is a legacy, my role model.  I had the pleasure to see and talk to her day before she bid us farewell.  CHS promised her a Zumba at KCCC.  We will have a CHSNAF Canada Zumba for Mama Ching at KCCC in January 2016!” 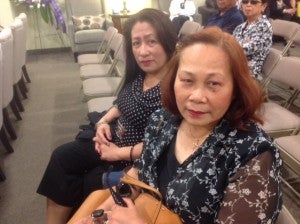 Nena and Rebelyn Pasamonte, sisters who are members of Annak ti Batac Association of Canada, pay their respects and share that Mama Ching offered support and strong leadership to their organization.

Madoline Baluca, a member of the KCCC board of directors said, “Mommy Ching was a visionary.  Somehow she could see something in the future.  She was so focused on what she wanted to accomplish–an acquisition of a Filipino community center.”

Rosalinda Tijam, president of the Philippine Press Club of Ontario, said, “Mama Ching was  an incredible community leader, professional and role model. At an advanced age when many other folks would prefer to take it easy, Mama Ching persevered to grow the Kalayaan Cultural Community Centre to what it is now. She tirelessly led fundraising ,  activities and networking within KCCC and with  other organizations and community members. She was loved by all because of her gentle, kind nature. Mama Ching is the community and family  matriarch we want to emulate. She is a great loss to all of us.”

From Mona Eugenio, who worked with Mama Ching, “35 or 40 years ago, Mama Ching set up (the) Mutya ng Filipinas–her legacy is her vision.  She is a mover, Kalayaan will live on, because of her.”

The internment ceremony concluded with a reception at KCCC for the mourners.